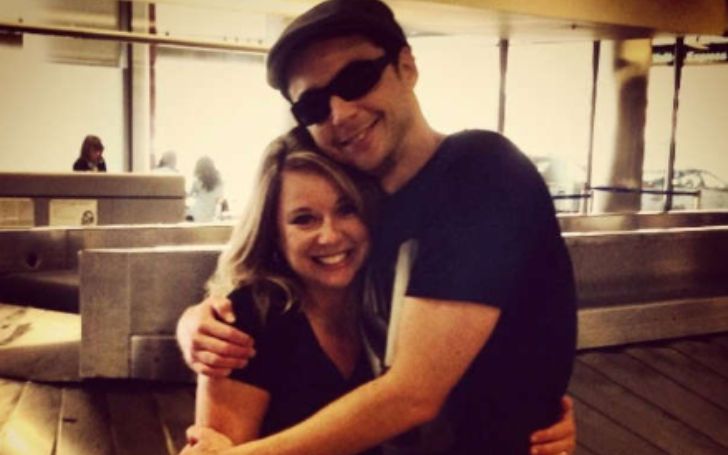 Julie Ann Parsons is the younger sister of Sheldon from the show, The Big Bang Theory. Can you guess who that is? That’s right, she is the baby sister of actor, Jim Parsons. This famous sister is not well-known, nevertheless, we have brought to you some interesting facts about Julie in this article.

So, who exactly is Jim Parsons’ sister? Is she a celebrity like her big bro, or is her passion a bit different than his? Also, did you know that Julie Ann is a married woman and Jim has two nephews? All these questions (and more) will be answered as you read the following article further.

Therefore, to know more about Parsons’ younger sister, Julie Ann Parsons, dig into the article below. So, what is her lifestyle like? Let’s find out!

Julie Ann Was Born As Jim’s Younger Sister; Details On Her Early Life

Julie Ann Parsons was born in 1976 as the youngest member of the Parsons Family. Her parents, Late Milton Joseph Parsons and Judy Ann-Parsons welcomed their beautiful baby girl into their warm and cozy home in Houston, Texas.

That’s not all; she was brought into a home where she would later grow up with one of the most influential actors in Hollywood. Tony Award winner, Jim Parsons is Julie’s older brother. The two have an age difference of only 3 years and are very close since the earliest days of their lives.

Both Julie and Jim seemed to have a great childhood growing up. Moreover, they grew up in a well-adjusted home where both of their parents were present to fulfill all their needs. Ann’s father, Milton Parson, was a successful businessman; he had a plumbing company. Likewise, her mother used to work as a teacher. Both of Julie’s parents’ professions really helped to shape her into a wonderful woman today.

What Is Her Educational Background? Is Ann As Smart As Her Brother?

As many of you might guess, Julie went to the same school as her brother from the very beginning. She graduated from Klein Oaks Highschool located in Harris County, Texas.

Furthermore, she was not as interested in acting and theatre as her brother, Jim. After graduating, Parsons pursued a degree in theatre, while his little sister went on to receive a degree in Elementary Education. It is a Bachelor of Science degree that Julie pursued from Baylor University.

As it seems, this brother-sister duo did seem to have quite different personalities. However, they both sure are both very intelligent.

She Was 25 Years Old When Her Father Passed Away; What Happened?

When Julie Ann was just a 25-year-old young woman, an unfortunate incident occurred that left the whole Parsons Family in shock. Her loving father, Milton passed away in a tragic car crash. This saddening incident took place on 29th April 2001 and Julie’s dad was just 54 years old at the time.

The intimate details of the crash were not known even to Mr. Parsons’ kids after his death. Many believe that he was alone in the car when it happened.

Milton or Jack (as he was known) was the best dad. He loved his wife and kids immensely. It is even believed that Julie and her brother still are not able to move on from this unfortunate incident. Regardless, we hope that he is resting well in peace today, looking after his wife and kids from heaven.

Unlike Her Brother, Julie Followed In Her Mom’s Footsteps To Become A Teacher

As mentioned above, Julie Ann was more interested in teaching than her brother. After completing her undergrad in Elementary Education, she started working as a teacher. We can also say that she followed in her mom’s footsteps into becoming one.

Previously, she worked as a primary school teacher for almost 19 years. She was in the shadows of her mother, Judy Parsons as both mother and daughter worked in the same school. Furthermore, Judy retired after 4 decades of teaching, and following her, Julie Ann also quit her job.

The main reason for Jim’s sister leaving her job as a teacher is not well known. However, according to some speculations, she might have left her career behind to take care of her family more.

Furthermore, because of her “off-the-radar” life today, we are not really what she is up to these days.

Why Is Jim Parson So Famous? All You Need To Know About Julie Ann’s Brother

49-year-old Jim Parsons is a well-known actor in Hollywood. He is active in this industry since 1993, yet his work is best admired after 2007. Can you guess why that is? Well, from 2007 to 2019, Parsons portrayed the role of Sheldon Cooper in the sitcom, The Big Bang Theory. This role really helped him rise to fame. He also got to play alongside the famous actress, Mayim Bialik in this sitcom.

With a degree in theatre, Julie’s brother has also performed remarkably on Broadway. He made his debut on Broadway in 2011 in the play, The Normal Heart. In addition, recognizing his talent, Parsons was awarded a Drama Desk Award for his role in the play.

Today, after struggling for years, Jim Parsons is one of the most successful actors in America. Even more so, he is one of the highest-paid TV actors as well. For his stunning portrayal of Dr. Cooper, he has received four Primetime Emmy Awards and a Golden Globe. He surely is filled with extreme talent!

Is 46-Year-Old Parson Happily Married And A Mom? Information On Her Current Family

Julie is more than just Jim Parsons’ younger sister – she is also a loving wife and a wonderful mother.

Currently, she is married to Nathan Pruski and has officially changed her surname to his. Thus, Julie is known more as “Julie Pruski” nowadays. The couple got married on 2nd June 2001, about 2 months after her father’s death. Although his absence was felt at the ceremony, Jim did the best he could to throw a wonderful wedding for his baby sister.

The ceremony was held at Trinity Lutheran Church in Texas. Following this, there was a grand reception at Northgate Country Club.

Unfortunately, deep details about how Julie met the love of her life are not readily available. Furthermore, we do know that today she is a mother to two kids. Parker and Michael are Julie and Nathan’s sons.

Is This Brother-Sister Duo Still Close? What Is Their Relationship Like?

Julie and Jim Parsons share a wonderful bond together. Since the earlier day of their lives, this brother-sister duo has been inseparable. Even more so, after the death of Mr. Parsons, Jim has been there for her as a fatherly figure.

Although Julie Pruski (as she is known today) has a family of her own, she does seem to have a very friendly relationship with her actor brother. Moreover, we could even say that she is one of his biggest supporters.

On the other hand, her brother Jim is currently married to his film producer husband, Todd Spiewak. They exchanged vows on May 13, 2017. They don’t have any children between them.

What Is Julie Up To Today?

Unlike her famed brother, Julie Ann likes to live a quiet life. She stays away from the hassle of TV and social media. Thus, it is very hard to know what she is up to these days. Nevertheless, we believe that she is a great wife and mother today, and an even greater sister.

On the other hand, her brother, Jim is living his life to the fullest. This actor is listed in Forbes magazine as one of the most highly-paid actors. He has a net worth of a whopping $160 million dollars.