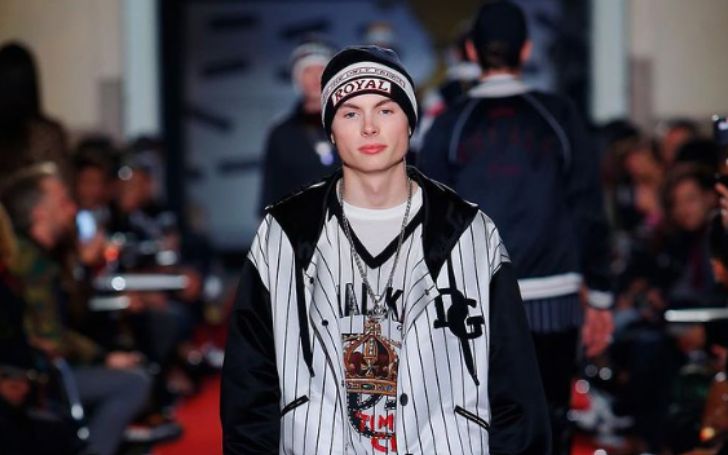 Jack Marsden is a model and singer as well as the oldest son of Dead to Me actor, James Marsden, and his ex-wife, Lisa Linde. 20-year-old, Jack comes from a line of acting, music, and modeling. So, is he also in this business? Yes! Jack is a model and musician and started very young to make his career.

Jack, famously known as Jack Holden today is famed among youths despite the reputation that his celebrity parents set. Did you know that he has already released a music album? And, is he the proud owner of a music studio? We will have the answers to these questions soon.

By the end of this article, we will have dived deep into the life of this James Marsden’s son Jack Marsden. What are his interests besides modeling and acting? Is this cutie single? Let’s know together!

Jack Marsden Was Born After a Year of His Parents’ Marriage

Jack Marsden was born on February 1st, 2001 in Los Angeles, California. His parents, James Marsden and Lisa Linde got married on July 22nd, 2000, and shortly after, were blessed with a baby boy. However, the relationship between his parents was short-lived. This former duo was together for over a decade before deciding to walk on separate paths in 2011.

Despite the divorce between his parents, Jack seems to have had quite a loving and healthy relationship with both of them growing up. There are a series of childhood photos of Jack on James Marsden’s Instagram reflecting the great bond shared by this father-son duo. Similarly, pictures on Jack’s Instagram show that he loves his mother, Linde, more than anyone and anything in this world!

However, Jack isn’t the only loved kid his parents have. He also has a younger sister, Mary James Marsden. 17-year-old Mary is the middle child of the X-Men star, James Marsden, and the younger daughter of Days of Our Lives actress, Lisa Linde. Similarly, Jack also has a half-brother, William Luca Costa-Marsden, the son of James Marsden, and his former girlfriend, Rosa Costa.

A Bit About His Lineage And Ancestry

While not much about his maternal side is known, Jack from his father, James’ side, belongs to several ethnicities including English, German, Scottish, and distant French. Jack’s grandfather (James’ father), James Luther Marsden is a professor of animal sciences.

On the other hand, his maternal granddad was country music songwriter, Dennis Linde. To add more to his ancestry, Jack’s patrilineal ancestry apparently goes back to George Marsden, who was born, c. 1808, in England.

Jack Marsden’s Career As A Model And Musician

As mentioned earlier, Jack comes from a line of showbiz. His mother, Lisa Linde, contributed a lot to Hollywood till the 2000s. Similarly, Jack’s father, James Marsden has had multiple roles as an actor, musician, and model.

Do you think this influenced Jack’s career as a model and musician? We guess so.

The Pacific Blue actress’s son, Jack Marsden made his debut as a runway model at just 16 years old. He modeled for Dolce & Gabbana during the Milan Men’s Fashion Week in January 2018. Alongside Jack, there were a lot of other star kids at the event, including, Pierce Brosnan’s son, Paris Brosnan.

Jack had the full support of his father during Fashion Week. James Marsden was seated in the front row and cheered for his son throughout the event. He also posted a photo later on Instagram with the caption,

“Could not be more proud of my oldest son @jackmarsden walking his first show for @dolcegabana… #proudpapa,”

James surely loves his son to bits. He also takes much interest in Jack’s modeling career and takes him to fashion shows of renowned brands, including, Louis Vuitton.

His Career As A Musician

Similarly, besides modeling, Jack Marsden has also contributed to the music industry. In the musical world, he is famously known as Jack Holden and owns an at-home music studio, the JM Recording Studio. Jack released his first album, To the Planes in July of 2020. This followed the release of this first single, Kiss.

Jack’s success in the music industry is also highly influenced by his father. As well as that, James Marsden’s musical performances in movies like Enchanted and Hairspray helped foster Jack’s interest and love for music. In an interview, he even said,

“My special talent when it comes to music is that I’m able to teach myself the basics of an instrument, all by ear. But if it wasn’t for my dad, I wouldn’t have known how to get myself started. Shoutout to dad!”

Besides the fame game, Jack Marsden likes normal “teenage boy” kinds of stuff. He loves playing video games and hanging out with his friends.

Jack Marsden is in a Committed Relationship with Soleil Jace

Sorry ladies, the man is taken! 20-year-old Jack Marsden is currently in a lovely relationship with his girlfriend Soleil Jace. The beautiful bond that the lovebirds share can be reflected through posts on Jack’s Instagram. Soleil is the center of his world, and apparently his Insta!

Although not confirmed, Jack and Soleil might have been together since 2020. Moreover, the couple is still going off strong as of today. We also do not have concrete information on how these two met or what Soleil does for a living.

As he should! Being the son of two renowned stars in Hollywood has its own benefits. On top of that, with Jack’s career in modeling and music, he must really have a pretty luxurious life. Just at 20 years old, his net worth sits at $1-5 million dollars. This could increase in the future as he slowly reaches the top of showbiz.

Similarly, the popular Party of Five star, James Marsden, aka, Jack’s father, has a net worth of a whopping $10 million dollars. On the other hand, his mother, Lisa Linde’s career has also showered enough fame and fortune on her to give her children the life they deserve.