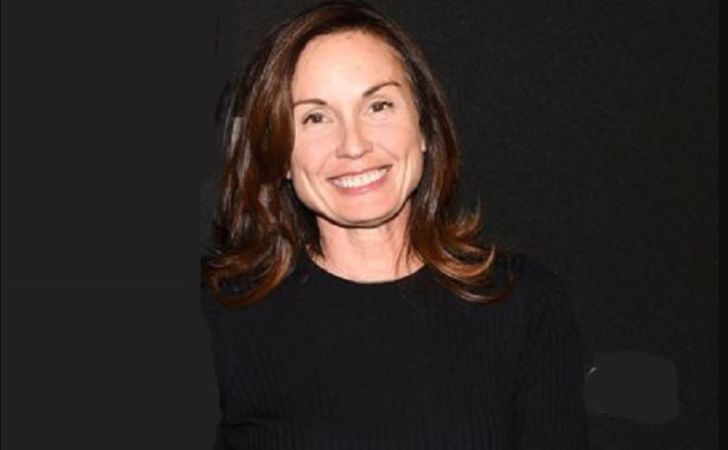 Kathryn Chandler, born Kathryn Macquarrie, is a screenwriter and actress by profession. But despite her decently successful professional life, Katheryn is recognized in the media more as the wife of successful actor Kyle Chandler.

With over 25 years into marriage, Kathryn and her husband Kyle have already set a benchmark for all the couples out there. Moreover, they also have two children from their marital relationship.

Well, here is a full bio of Kathryn Chandler with interesting info on her career, marital relationship with her husband Kyle, and her children as well.

Kathryn Chandler Is The Wife of Actor Kyle Chandler

58 years old Kathryn Chandler leads a beautiful marital relationship with her husband Kyle Chandler. They married in 1995 and have been together ever since. But how did their romantic relationship begin?

Well, the duo first met back in 1993, and it was Kyle’s dog along with him on his bike that first caught Kathryn’s attention.

Talking about her first encounter, Kathryn, who didn’t recognize Kyle, though he had appeared in a few successful roles, stated,

There’s a place in Los Angeles called Dog Park. I would take my little Jack Russell terrier there, and sometimes I’d run into Kyle and his dog. So we would kind of smile at each other and do the triple take, but we wouldn’t really do anything about it. Then one day I was there on one side of the park with my dog, and he was on the other side with his dog. No one else was there. So I said to (my dog) Otis – who never does anything that I tell him – `Go over and jump on that guy.’ And he did! He went over and just pounced on Kyle, who said, `Whoa, friendly dog you got here.’

The first conversation was an icebreaker for the two, however, they didn’t actually start dating right away. And it may sound a little unusual but Kyle took over six months before he asked Kathryn out on a movie date.

Eventually, their friendship soon blossomed into a romantic relationship and then into a marriage.

The couple has two children from their marital relationship, both daughters Sydney and Sawyer. Well, like any kids, they share a great relationship with both their parents and often go out together on vacation to different places.

Besides, Kyle and his daughter Sawyer, who is in her early 20s, are also actively involved in the campaign to end the practice of shark finning. The family of four lives in Chicago at present.

Kathryn is mostly recognized as the wife of The Midnight Sky actor Kyle Chandler, but she also has a career of her own. She is a successful former model, an actor, and a screenwriter as well.

She has been a part of a few uncredited roles in independent films. Back when she was still unmarried, she appeared in the movie named The Willies, in the roles of a “Tough Chick.” The movie was released in 1990.

Similarly, as a screenwriter, she has been a part of the TV drama series Red Shoe Diaries. Apart from these, she has also worked as an animator in numerous animation movies. Some of them are The Lion King, Dora and the Lost City of Gold, Lady and the Tramp, Cats, & The One and Only Ivan.

Aside from that, she is also the founding member and president of Patriots’ Hall of Dripping Springs. Its mission is to provide a retreat and resource base for US veterans, regardless of their age or branches. Her husband Kyle is also the co-founder.

Her Husband Is a Successful Actor

As we have mentioned earlier, Kathryn’s husband is a successful actor. Making a debut in a minor role in the TV film Quiet Victory: The Charlie Wedemeyer Story in 1988, Kyle has really come a long way.

Following his debut in TV, he got numerous roles that include Unconquered, Home Fires Burning, China Beach, Freddy’s Nightmares. Some of his other successful roles include Early Edition, What About Joan?, Grey’s Anatomy, Robot Chicken, Bloodline, and many others.

Similarly, Kyle made his film debut in 1990, appearing in The Color of Evening. In the movie, he portrayed a character named John. Some of his other successful films include Angel’s Dance, The Day the Earth Stood Still, Zero Dark Thirty, The Wolf of Wall Street, Game Night.

Just recently in 2020, he was seen in Sci-fi Drama The Midnight Sky as Mitchell Rembshire. Similarly, in 2021, he will be seen in Godzilla vs. Kong as Mark Russell.

The former model Kathryn lives a luxurious life along with her husband and children. But unfortunately, she has not revealed her net worth. However, her husband is pretty open about his wealth with his total owning estimated at $9 million, as per Celebrity Net Worth.

Is Kathryn on Social Media?

She instead makes public appearances with her husband quite often. She was even seen accompanying her husband during the promotion of his 2015 TV series, Bloodline.

The beautiful Kathryn Chandler was born Kathryn Macquarrie, in June 1963 in the United States. Born to American parents, she is an American and belongs to white ethnicity.