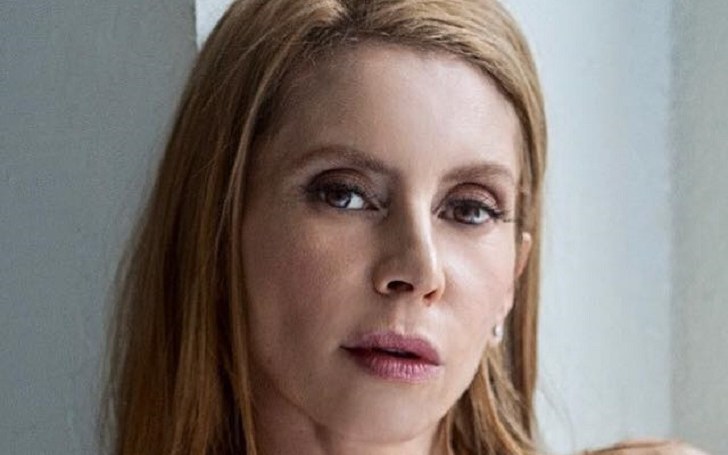 Tharita Cesaroni is the wife of Dermot Mulroney. Her husband is an actor who has worked in dozens of highly-acclaimed movies and TV projects over the course of his extensive career. In the meantime, Cesaroni also has a fantastic career in the music field. Her Italian mother is a professional singer too.

Besides, as for their marriage, Cesaroni and her hubby Dermot are leading a happy married life for several years now. Also, let’s find out if Tharita does share any kids with her spouse or not.

Here are several unexplored facts about Dermot Mulroney’s wife Tharita. Let’s check it all out!

What does Dermot Mulroney’s wife Tharita Cesaroni do? Her professional accomplishments

Tharita is a musical artist who was interested in music from the mere age of three. She has released many albums and songs to date. She released the music video of her song called Mamma Scusa in Dec 2017. When the interviewer asked her to say something about the song and its meaning, the artist replied,

“MAMMA SCUSA means I am sorry mom and it’s literally an apology for not having listened to my mother’s advice, mother turns out knows best!”

On 25th Jan 2018, the singer with a soulful voice came with her debut album Stand up for Love. The album features 10 tracks that include My Heart Is Open, Mio Amore, Done With You, Only You, Cake, In My Head, and more.

She said the reason why she selected the title of the album is “because in this world and time we all need to stand up for love, there is not enough love and no one is standing up for it and guess what? Love is the answer.” She also has a YouTube channel under her current name Prima Apollinaare.

On the other hand, sources reports that Tharita is also a cinematographer and producer.

Where is Tharita Cesaroni From? Her Parents

Dermot Mulroney’s spouse was born in 1973, in Milan, Lombardy, Italy. She is the daughter of Italian parents Emy Cesaroni and Franco Catullè. Her father is from Calabria.

Besides, her mother Emy is a Terni native. She is a singer who released an album under the title “Emy Cesaroni L’italia a 45 giri: emy cesaroni” that features eight songs like Sette Giorni, Fumo nero, and more.

Tharita grew up in Milan with her family. She has dual citizenship American and Italian. She belongs to the Italian ethnicity.

The couple tied the knot back in 2008. However, there is no more detail about their wedding. Tabloids say, the two dated for a while before walking down the aisle.

It’s been over twelve-year since the two married but their marital relationship still seems too strong. They are also quite open about their marriage and frequently appear together on various occasions.

They also attended dozens of events together in the past.

They are blessed with two children

Tharita gave birth to their first child, a daughter named Mabel Ray in April 2018. Her pregnancy news came out a month before their daughter was born. The little girl was baptized at San Pietro’s Church in Roccascalegna, Italy on October 4th of the year.

Dermot and Tharita welcomed their second daughter named Sally June Mulroney in late 2009. The couple stepped out with their daughter to attend the residence of the New Zealand Consulate-General on May 21, 2011. It was a 12-hour global telethon to support victims of the February 11 Christchurch quake in Los Angeles.

Thakita has been married to Dermot since 2008 but never adopted his last name. According to TMZ, the artist has totally changed her name to Prima Apollinaire. She told it is her family name. Tharita also revealed that ‘Prima’ in the Latin language means First, Apollinaare it’s just a surname.”

The actor was married to Catherine Keener, an actress in 1990. The couple first came across while filming the movie Survival Quest in 1986. The two also shared a son named Clyde Keener Mulroney, born June 21, 1999. He is a singer.

Nonetheless, the couple couldn’t last long and separated after 15-year of their marriage in May 2005. Dermot filed for divorce on 11th June 2007 and their divorce was finalized in December 2007.

What is Tharita Cesaroni Net Worth? Owns an apartment in Manhattan

According to sources, her net worth is $100,000. She currently resides in her apartment in Manhattan with her hubby and two children.

On the other hand, her spouse Dermot has an estimated fortune of $11 million. He has racked such considerable wealth from his work in movies and TV shows.

Is a Tatto Lover

The singer has inked a few tats on her body. We can see some pronounced and big tattoos on both of her hands.

The celebrity spouse has also shared several images of her tats on her social media handle.

Born in Alexandria, Virginia, Mulroney is the son of Dermot Mulroney Sr., a law professor, and Ellen, a regional theater actress. He graduated from Northwestern University in Evanston, Illinois.

He kicked off his acting career by playing the role of Tim McGary in a TV film called Sin of Innocence in 1986. The same year, he appeared in Fame and CBS Schoolbreak Special.

In 1988, the actor landed his first big-screen role in the movie Sunset. His other major hit projects quickly followed like Staying Together (1989), Bright Angel (1990, and more.

Furthermore, Mulroney has worked in hit films that include Angels in the Outfield, My Best Friend’s Wedding, The Wedding Date, August: Osage County, and Insidious: Chapter 3.

Besides, the entertainer also has worked in many TV shows. He portrayed Sean Pierce on Shameless (2015-17). Other TV projects he is credited for are Hanna, The Righteous Gemstones, and The Eric Andre Show.