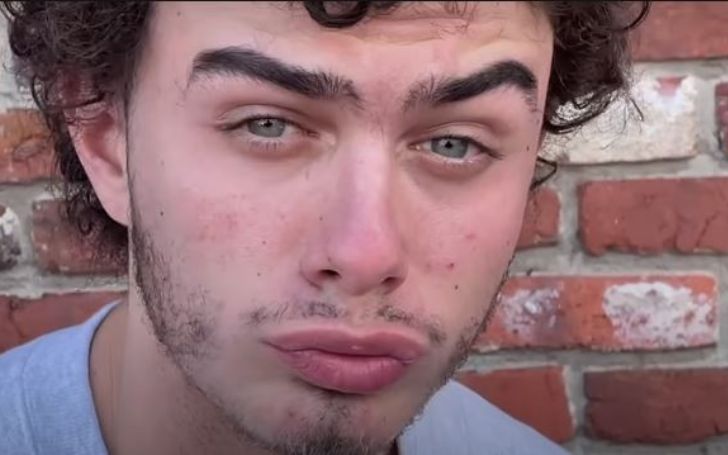 Locke McLaughlin is the son of, Rhett James McLaughlin, one of the comedians from a famous internet duo, Rhett & Link. Locke’s father, Rhett is an Internetainer who along with his partner Link fully Link Neal is famous for creating and hosting the YouTube series Good Mythical Morning or GMM.

Locke’s father, Rhett joined Youtube alongside Link on Sep 18, 2018. Since then their channel Good Mythical Morning has close to 8 billion views and more than 17 million subscribers.

Locke too has appeared in several episodes of Good Mythical Morning, usually with his father or Link Neal’s oldest son, Lincoln. While being on his father and his longtime friend’s show, Locke often teams up with Link’s three children to go against each of their fathers. In a way, Rhett and Link’s fans have seen their children including Locke grow up from toddlers to teenagers. Now heading to college, Locke seems to be quite an interesting guy next to his well-known father and his partner. Know all about him in the write-up below.

Rhett James McLaughlin’s son, Locke was born on Feb 24, 2004. Locke also has a younger brother, Shepherd McLaughlin who was born in 2008. Shepherd is currently 14 years old.

His famous YouTuber father Rhett used to be an engineer but quit it after graduating from college to shift their focus to their Christian Evangelism with a religious organization Cru. He was a student at North Carolina State University. Later he transitioned to making YouTube videos full time without Christian ministry.

The 18-year-old Locke is the grandson of Diane McLaughlin and Jim McLaughlin. His maternal father is a dentist. The teenager’s parents, Rhett and Jessie McLaughlin tied the knot on the 29th of March, 2001.

Locke is set to graduate high school at some point in 2022. While in high school, he took part in some German Curriculums and also studied some German AP courses/languages. When reported in Jan 2022, Locke’s father said he was applying for a couple of colleges writing essays and all.

Rhett once revealed Locke, his first child is an Enneagram eight, a personality test score in which people are self-confident, strong, and assertive.

Did Locke McLaughlin’s Father, Rhett Named Him After A Famous Series Character?

Often when it is about the oldest child of Rhett, there have been many questions from his fans all wondering if the six-foot-seven-inches tall Youtuber named Locke after John Locke the character from hit ABC drama series, Lost played by actor Terry O’Quinn.

So has Rhett ever confirmed or talked about this coincidence?

While the podcaster has talked about it, he though denies there’s any connection between the names of his son and the fictional character.

That indeed couldn’t be so at all because Rhett’s son Locke was born before Lost even aired. The series premiered on ABC in Sep 2004 while as mentioned, the first son of Mr. McLaughlin was born earlier that year in Feb.

Though what led people to come up with such a theory is that Locke’s brother, Shepherd too, is a character on the ABC series. In fact, Locke and Shepherd are the main opposing semblances in the show, Lost.

Though worth noting is the fact that Shepherd’s name has a different spelling than the character on the show. All in all, the happenstance is clearly coincident and so far, there hasn’t been much talk in this regard from the concerned people.

While Locke may only be an occasional face on his father’s famed YouTube show, what few know is he was the prime factor that catapulted his dad to internet fame or so some people claim.

Locke was the lone star in his father and Link’s first viral video “Wolfpack or Tarheels?” The two had uploaded the footage on Rhett’s personal YouTube channel in 2006 (though no longer active).

In what would turn out to be a viral video, Rhett’s then 3-year-old son Locke McLaughlin cries over the loss of the NC State Wolfpack and their rivalry with the North Carolina Tar Heels.

The video went so viral that YouTube wanted to feature it on the home page but Rhett and Link asked to have one of their songs featured instead. The reason for this was that they wanted people to recognize them for their comedic work and not a viral video.

The crying footage of kid Locke though still lives on YouTube.

In 2021, Locke went on a cross-country road trip with his father, Rhett. The father and the son in fact had planned to visit international territories as well but the pair couldn’t do so because of the Covid-19.

Rhett once said because of his son’s Enneagram eight, Locke had doubt and skepticism before agreeing to the aforesaid road trip.

The GMM co-founder explained his son’s anxiety was primarily because the trip was meddling with his college application preparation.

While Locke eventually agreed to the trip, the morning he and his father were about to kick off, he broke a part of one of his crown teeth.

Does Locke McLaughlin Have A Girlfriend?

Although Rhett talked a plenty lot about his eldest son, Locke in the Jan 2022 episode of Ear Biscuits which was right after the father-son duo had returned from a crossroad country trip, not once did the ex-engineer tease the thread of his son having a girlfriend or a romantic partner.

For all that Locke is in a period where he couldn’t be more inclined towards love or having an association with somebody, he seems to be pretty discreet about it all.

How Rich Is Locke’s Father, Rhett McLaughlin; What Is His Net Worth?

Locke’s father is definitively rich with a net worth of over $20million. And considering the span, Rhett and his internet partner have spent on YouTube that should hardly be a surprise.

Ever since their internet fame rose to millions of views, the duo has been constantly among the highest YouTube earners. In 2021, Locke’s father and Link ranked fourth on Forbes list of the top 10 highest earning YouTubers with combined earnings of $30million.

To say more, the Ear Biscuits hosts over the years, the pair has become more than just a YouTuber with investment in other lucrative channels and subsequently profiting off of them. For instance, in Feb 2019, Rhett and Link’s Internet entertainment studio Mythical Entertainment bought a fellow thriving YouTube channel Smosh for a whopping $10million.

To have a bit of an outlook on how much Locke’s father and Neal make just from their YouTube notoriety, it might be helpful to note that in 2020, they hosted an R-rated live stream for which the ticket price was as much as $50.

It is believed Locke and his brother suffered from several seizures which they inherited from their father.