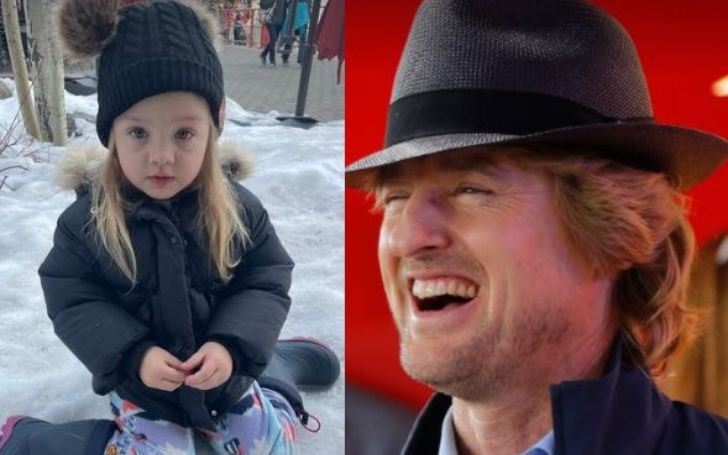 Lyla Aranya Wilson is the daughter of the Wedding Crashers actor Owen Wilson and his former girlfriend Varunie Vongsvirates. Including Lyla, the actor, Wilson is a father to three kids; he has two sons. The actor talks about his sons during the interviews but has never mentioned his daughter, Lyla. In fact, Lyla is soon to be four, but the Zoolander actor is yet to meet her in person.

Furthermore, there’s a bit of drama involved whenever Lyla is in the discussion. To many people, it seems Owen is a deadbeat dad for clearly ignoring his daughter. Her mother too has thrown several shades at Lyla’s actor father for not being present in her life. Although in recent years, Wilson has sort of adopted a father figure through his movie roles, considering his real-life situation with respect to the very subject, many have questioned him about his fatherhood.

Despite all these, Lyla isn’t within the confines of privacy that other celebrities impose on their kids. She is quite known to people through her mother’s Instagram. Read more about her including the reasons why her celebrity dad is refusing to see her and also her actor father’s relationship history.

Lyla Aranya Comes From The Family Of Actors

Lyla Aranya Wilson, who was born on Oct 9, 2018, comes from a family of actors. In addition to her father, Owen, Lyla has two uncles (Wilson’s brothers) who also have had numerous roles in films and TV. One of Lyla’s uncles, Luke is an actor who has been in films including Rushmore, My Dog Skip, Legally Blonde, The Royal Tenenbaums, and others. He has also been on shows like That 70s Show, Enlightened, and Stargirl among others.

Lyla’s other uncle, Andrew Wilson is also an actor. His films include Fever Pitch, Idiocracy, Church Ball, Whip It, Druid, and Time Trap.

Speaking of her mother, Varunie, however, there is not much to tell except that unlike Owen or her brothers, she isn’t an actress. Although not much about her profession is known, she is reportedly a business development representative who graduated from UC San Diego with a degree in Arts. Also, Varunie has a Thai father and a brother who works in Thailand. She also has a sister.

Lyla’s parents, Wilson and Varunie dated from 2013 to 2018. They were together for five years with several breakups in between. Varunie and her daughter’s father broke up sometime in 2018 but the ex-couple has since entangled themselves in quite the controversy regarding their child.

The former partners became pregnant around their final separation. Varunie informed Wilson that she was pregnant with his child four weeks into her due date. Apparently, when Vongsvirates told Wilson that she was pregnant, the Texas-born actor denied he was the father and even changed his number. Owen also didn’t pay for Varunie’s medical bills, diapers, baby clothes, bottles, crib, pram, and others.

After Lyla was born, Vongsvirate tried several times to contact Wilson and urged him to come and see his daughter. Then in June 2018, Wilson did a paternity test. The results later showed the Wedding Crashers actor was indeed Lyla’s biological father.

Varunie once also took to her Instagram to call out Wilson. In one of her Instagram posts, Vongsvirates said while Owen was in a film, Father Figures, he couldn’t be a real father. In 2019, Varunie told Daily Mail that “Owen has never met Lyla. Never.” She, at the time admitted, the Dallas-born actor however helps them financially but said it never was the issue. Vongsvirates during the interview with the Daily Mail urged Wilson to see his daughter and said how incredible she is. Varunie, during the same interview, added,

“Lyla needs a father. It’s ironic how [Owen] keeps getting these father roles, he’s playing a father in his new movie, and he’s never met his own daughter.”

Sources have reported that Wilson checked a box to say he had no wish to have visitation rights for Lyla. Wilson, however, as mentioned, pays a massive amount of money in child support for Lyla. This was after the DNA test proved Lyla was, in fact, his daughter. The court has ordered the Loki star to pay $25000 a month in child support. The actor also needed to pay $70,000 as a one-off payment to compensate for Varunie’s labor expenses.

Lyla Has Two Half Brothers

While Lyla is the only child of Varunie and Wilson, through her actor father, she has two elder half-brothers, Robert Ford and Finn Lindqvist Wilson. Owen had Robert on Jan 14, 2011, with his ex-girlfriend Jade Duell. The Internship actor likewise welcomed Finn Wilson with his other ex-partner and former fitness trainer Caroline Lindqvist. Wilson is seemingly a great father to his boys.

Despite no longer being in a relationship with the mothers of his sons, Owen reportedly has a good relationship with each of them. Wilson, in the meantime, also had relationships with famous women including actresses Gina Gershon, Demi Moore, and Kate Hudson. He was also the boyfriend of singer, Sheryl Crowe.

Why did Owen Wilson Refuse To See His Daughter, Lyla?

Owen hasn’t publicly addressed why he isn’t willing to be part of his daughter’s life yet. However, some people have theorized that the actor, when he was dating Vongsvirate, didn’t want more kids than what he already had, his two sons. Many people on the internet speculate that the now 54-year-old actor might have told Varunie that he didn’t want kids but she didn’t concur.

Some also assume their break up had something to do with their disagreement over whether to have kids or not. Many people believe Varunie might have gotten pregnant on purpose and that didn’t go well with Owen which consequently could have ended their relationship and resulted in Wilson not seeing his daughter, Lyla. On the other hand, ever since the emergence of the court papers which showed Owen having no interest in seeing his daughter, many have been criticizing him left and right.

Lyla Is Very Much On Her Mother, Varunie Vongsvirates Instagram

Wilson’s daughter Lyla has been popping up on her mother, Varunie’s Instagram since day one. In fact, Lyla debuted on her mother’s exertive Ig even before her birth.

A couple of months before she would welcome her daughter, Varunie posted an ultrasound photo of her pregnancy with a caption,

Since the arrival of Lyla, Varunie’s Instagram has all been about her daughter. One could say, Lyla is growing up with each of her mother’s social media posts.