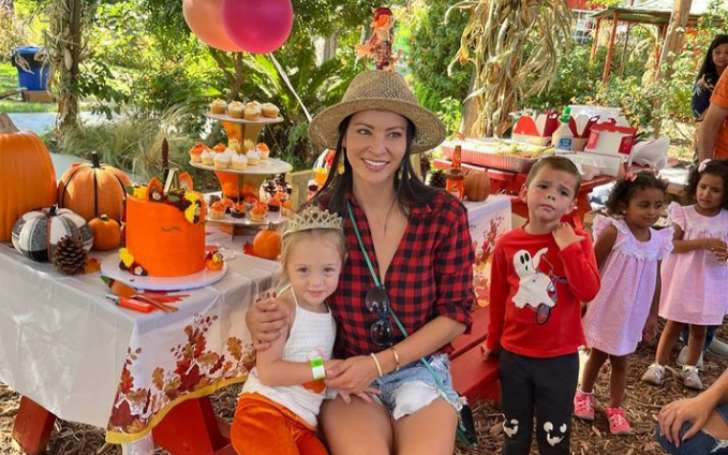 Varunie Vongsvirates came to the limelight as the ex-girlfriend of an actor and an onscreen comedian and member of the Frat Pack, Owen Wilson. Similarly, her one-time partner is also known for his long-term collaboration with the filmmaker Wes Anderson.

Aside from their romantic relationship that lasted for over a half-decade, Varunie is also the mother of one child with her ex-boyfriend Wilson. Are they co-parenting their child after their split? Also, know what does Varunie do for a living at present?

Here is the detailed Varunie’s personal and professional life post-separation from her former partner Owen.

Who Is Varunie Vongsvirates? Quick Facts About Her Age, Parents, & Siblings

Varunie Vongsvirates is a former model who was born on November 19, 1983, in California, USA. Although, her parents’ names are yet to be revealed, both her mom and dad are no longer in this world. Her mother died in mid-2014.

Two years after her death, Varunie shared a throwback photo of her mom on her Insta and wrote,

Furthermore, after scrolling down Instagram, we found out that Vongsvirates has one brother named Joshua Vongsvirates and a sister whose name is unknown. Besides, talking about her childhood days, Vongsvirates spent most of her early life in her hometown in California.

Although Owen’s ex-partner has lived in the same states for her entire life, Vongsvirates did change cities dozens of times. She has lived in the city including San Diego, Santa Monica, Newport Beach, West Hollywood, Los Angeles, Del Mar, Bakersfield, and La Jolla, so far.

The 39-year-old Varunie first went to a high school near her hometown. She later went to enroll at the University Of California at San Diego. In Aug 2007, Vongsvirates graduated from there with a Bachelor of arts in political science.

The ex-partner of Owen Wilson, reportedly, stands at the height of 5 feet and 8 inches. And her former partner Owen Wilson’s height is 5ft 10in.

What Does Varunie Vongsvirates Do For A Living? Her Career

As mentioned above, Varunie used to work as a model in the past. Apart from this, Vongsvirates has multiple professions in different companies. In August 2007, Vongsvirates landed a job as an executive assistant to the general counsel at the World poker tour.

Just a year later, in August 2008, Varunie quit the job and began working for Ge healthcare/bio space inc. She, there, was a Device sales representative. Then, in 2009, she started her job as a physician liaison at the company named Pain care of san Diego.

From 2012-13, she worked at The rehabilitation center of Santa Monica as Director of business development.

Varunie and her ex-boyfriend Owen started dating in early 2013. They were often seen in public together until the next two years. In June 2014, Varunie and Wilson were seen in Malibu. At that time, they were seen in a coffee shop.

Later on, the former couple casually dated for five years before separating in 2018. While they were together, Varunie also became a mother of their child when their daughter named Lyla Aranya Wilson was born on Oct 9, 2018.

According to the many suggestions, Lyla was the main reason for their separation.

According to the ex-celebrity girlfriend Varunie, the actor has never met his own daughter Lyla. Instead, when Owen learned that Varunie was pregnant with their daughter, he changed his phone number, says RadarOnline. Furthermore, when Varunie told him she was pregnant with his child, The Royal Tenenbaums star even denied he was Lyla’s biological father.

Moreover, he didn’t even appear or take care during her pregnancy. Well, soon after the DNA test, Lyla was proven to be his own daughter. Eventually, Owen was ordered to pay $70 thousand as compensation to his ex for pregnancy costs.

He now pays $25 thousand every month as child support. Although Owen currently pays for the expenses, he hasn’t revealed why he never met his 4-year-old daughter Layla.

In 2019, Vongavirates disclosed to the Daily Mail the  Fantastic Mr. Fox actor has yet to make any contact with Lil Lyla. Varunie said, “He has never met her unfortunately.”

Further, Owen’s ex also said that, in 2019, she begged him to get involved in their daughter’s life. The 39-year-old model said,

‘He helps financially but it’s never been about that. Lyla needs a father. It’s ironic how [Owen] keeps getting these father roles, he’s playing a father in his new movie, and he’s never met his own daughter.’

Has Varunie Vongsvirates Moved On With Someone After Their Split?

Varunie Vongsvirates doesn’t seem to be starting a new life with a new partner any sooner. Well, after her split with her ex-partner Owen Wilson, she hasn’t said anything about her relationship status.

Hence, as of 2023, we can assume that Varunie is single and is raising her daughter as a single mother. Similarly, there isn’t any info when it comes to her past love affairs before Owen. But, her partner before fathering Varunie’s child, was in a couple of affairs.

In fact, Owen is the father of Robert Ford Wilson, with his ex-partner Jade Duell. Robert was born on Jan 14, 2011, on the Hawaiian island of Maui. Later, on 30 Jan 2014, The Cable Guy actor welcomed his second child Finn Lindqvist Wilson with his former girlfriend, Caroline Lindqvist.

Owen, 54, began working in the film industry in 1994. He landed his first role in an American crime comedy film named Bottle Rocket. In 2005, Owen who comes from a family of actors. collaborated with his two brothers, Luke and Andrew Wilson, in the TV film The Wendell Baker Story.

Furthermore, in 2022, the actor appeared in Romance/Comedy movie Marry Me. In that film, Owen played along with Natalie Buck, Jennifer Lopez, Sarah Silverman, and many more.

Besides, in his initial phase of acting, he worked in supporting roles in the American science fiction disaster film named Armageddon. Although it was a small role, he got a chance to share the stage alongside many high-profile actors like Billy Bob Thornton, Liv Tyler, Will Patton, and Ben Affleck.

“Sometimes life seems to be played by Tom Hardy in ‘The Revenant,’ some nightmarish guy trying to kill you, where even if you get the upper hand. He’s still going to be there at the end whispering. This ain’t gonna bring your boy back’ or your dad back or any good times from your past back. Or whatever. And when life’s being played by that guy, you just gotta hang on and wait for it to pass.”

On that matter, Owen says, his elder brother Andrew has helped him to get through.

Career-wise, the former celebrity girlfriend is currently a Business Development Representative. Besides, Vongsvirates is busy raising her daughter as a single mother.

At present, Varunie resides in Los Angeles, California with her baby girl.

Varunie Vongsvirates is active on Instagram. The former model has almost 33k followers on her Intsa as of 2023. She mainly features her 4-year-old daughter Lyla on her Instagram and often posts about her visit to different places.

Net Worth: Varunie Vongsvirates Has Earned A Lot Through Her Multiple Profession

Varunie Vongsvirates reportedly has a net worth of $1 million as of 2023. She made her fortune to be counted in six figures through her multiple careers in different companies as an executive assistant, device sales representative, physician liaison, and director of business development.

On the other hand, her ex-boyfriend Owen Wilson has a net worth of $70 million. He has been able to make a hefty bank balance from his career as an actor.