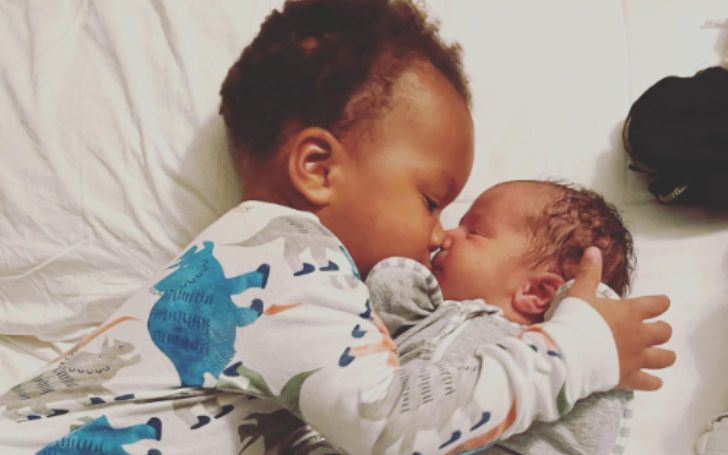 Maverick Shai Antetokounmpo is the celebrity kid who rose to fame as the son of the NBA basketball player Giannis Antetokounmpo and his partner Mariah Riddlesprigger. Giannis, who has won the NBA Most Valuable Players Awards twice in 2019 and 2020 is also popular as the “Greek Freak.”

Despite just being a year old, Maverick has already attracted the attention of the media, however, we are yet to see what the future holds for him. However, as of 2022, little Antetokounmpo is living a lavish life with all the facilities one needs to have a quality life.

On the other hand, many people are wondering if Maverick’s mom and dad are married. So, read the piece below to find out more about how the life of the basketball player’s son is going. Also, discover about his parents, siblings, and more.

The basketball player’s youngest son Maverick is one year old as he was born just last year in 2021 and recently celebrated his first birthday on 18th August. He was born to his mom Mariah Riddlesprigger and dad Giannis Antetokounmpo in Milwaukee, Wisconsin, USA, who are both sports personalities.

Furthermore, he holds an American nationality and belongs to mixed ethnic descent. However, the family chain of the kid is very interesting. His mom comes from an African-American background whereas his dad’s history belongs to Greek-Nigerian ethnicity. Also, his dad owns Nigerian and Greek nationality while his mom has American citizenship.

Maverick’s Family Background: Both His Mom And Dad Are Into Sports

The kid’s father Giannis Antetokounmpo (full name Giannis Sina Antetokounmpo) is a Nigerian-Greek professional basketball player. He plays for the Milwaukee Bucks of the National Basketball Association (NBA) and is also popular as “Greek Freak” as he originated from Greek. In addition, he is also a recipient of the NBA Most Valuable Players Awards twice in 2019 and 2020.

Similarly, Maverick’s mother Mariah Riddlesprigger played volleyball during her high school days. She was considered a great volleyball player and also won many titles in school. Nevertheless, she is not seen playing these days which probably means she is not active in sports at present. Mariah is currently the founder of a clothing brand and is also engaged in various charity events.

Giannis and Mariah are celebrating their relationship for a long time, nevertheless, they haven’t walked down the aisle yet. They are still girlfriend-boyfriends and look like having no intention of being husband and wife yet. Antetokounmpo and his girlfriend Riddlesprigger are living together and sharing a house.

The lovebirds first met in 2015 when she was doing intern at Basketball Operations. Eventually, the couple then started dating and rumors about their love affair were all over the media in 2016. At the end of the same year on December 31, Maverick’s dad shared his mom’s picture and made their relationship official.

The girlfriend and boyfriend are enjoying their relationship to the fullest celebrating every occasion like a family. Despite not tying knots, they have become parents to two beautiful children which we will reveal in the subheading below.

As we mentioned earlier, Gianni and his long-time girlfriend are parents to two kids in their relationship. Prior to the birth of the one-year-old, the mother of two became pregnant with her first child making Maverick the youngest baby in the house.

The mom and dad gave birth to the first bundle of joy, their eldest son Liam Charles Antetokounmpo on February 11, 2o2o. And just after a year of Maverick’s oldest brother’s birth, he was born.

Since both the boys are still kids, we don’t know what kind of bond they will have in the coming days. Nonetheless, both of them are having a great life as of now. Also, who knows, maybe the brothers will find best friends in each other when they will grow up.

Likewise, the momma is the happiest with her sons in her life. On September 28, 2021, she shared a picture of her sons where she wrote;

“My boys 💛 Being your mama is my greatest joy!
I hear it’s national son’s day and I’ll take any chance I get to celebrate you two little sour patch kids!”

Mariah keeps sharing their photos on her Instagram showing how much they mean to them. The family of four is happy together and we hope the mom and dad will exchange vows soon.

How Tall is Giannis’s Son?

Since the kid has turned one year of age, his height is not revealed by his parents. However, his elder brother Liam is 2 feet and 10 inches tall.

Net Worth: How Much Does Giannis Earn?

As Giannis’s son Maverick Shai Antetokounmpo is just one year old, he is too young to be engaged in any career. Therefore, his earnings as well cannot be predicted as of now.

Regardless, he is living a lavish life along with his brother as both his mom and dad have established careers. His dad Gianni Antetokounmpo is a multi-millionaire with a net worth of $70 million. He has amassed his fortune through his fascinating basketball career.

On the other hand, Maverick’s mom Riddlesprigger being an entrepreneur also has good assets. According to reports, her net worth lies between $500K to $1 million. Both parents are working together and support each other to give a luxurious life to their children.