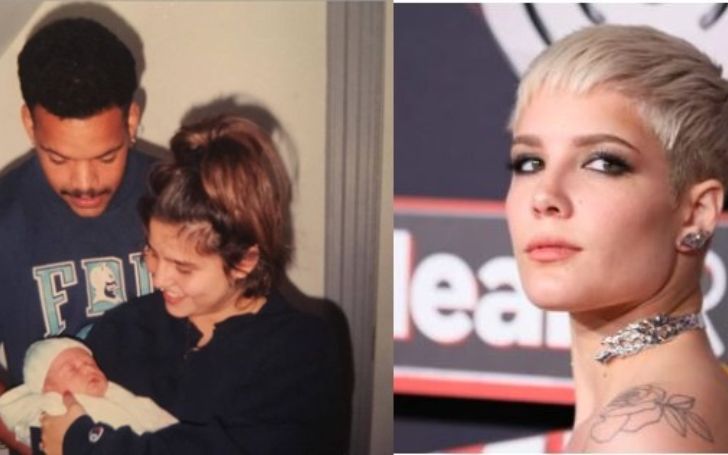 Halsey, the Bad At Love singer, whose real name is Ashley Nicolette Frangipane, is the daughter of Chris and Nicole Frangipane. The Gasoline singer has been completely honest about her upbringing and whether she wanted it or not, Halsey has brought up some stories and doctrines of her parents towards her during the q and a’s. And it’s more or less bittersweet.

The parents’ chapter of Halsey is basically about forgiveness and empathy. After knowing about them the listeners have labeled their parents as apathetic to parents being parents to whatnot.

But what really happened; what was the past like for Halsey and her folks? Were they really bad parents to the three-time Billboard Music Award winner? Read the answers along with several other facts in the piece beneath.

As mentioned, Halsey’s parents are Chris and Nicole Frangipane. They gave birth to Halsey on Sep 29, 1994. The artist is their first child. Chris and Nicole also have two more sons in addition to the Gasoline singer.

Halsey Mother, Nicole Frangipane Is A Descent Of Italian/Hungarian Parents

Halsey’s mom, Nicole is of Italian, Hungarian, and Irish descent. Nicole is the daughter of Richard Jacobs and Annette Canace. Her father, Richard was the son of Hungarian parents, Frank Joseph Jakab/Jacob and Maria/Mary Takacs. Frank was from Gresekarat, Vas, Hungary, and Maria was from Olaszfa, Vas.

Nicole’s mother, Annette was Italian and had settled in New Jersey. Anette was the daughter of Vito Canace and Josephine Fortunata Minervino. Both of Annette’s parents had roots in Calabria and Campania.

Ashley’s mother, Nicole, a native of Edison, New Jersey, used to work as an emergency medical technician. She apparently still works as one in Edison, NJ.

As per various reports, Nicole worked multiple jobs when she was a wife and a mother but still endured financial hardships. Halsey once revealed her mother was bipolar just like herself. The singer found out she had bipolar at age 17. This was sometime after she had tried to kill herself by trying to overdose on “mostly over-the-counter painkillers.”

Halsey Father, Chris Frangipane Ancestry And Career; He Is Mostly A Car Salesman

Chris is an African American. He purportedly also has some amount of Irish ethnicity in him. Speaking of her ancestry, Halsey once revealed when she did a DNA test, the results showed her genetic ancestry included “Italian, Turkish, Nigerian, Senegalese, and British/Irish.” Some however claim Ashley’s father is half African American and half Irish American, and his mother was European American (White).

The Grammy-winning singer, Halsey’s father, Chris worked at a car dealership as a manager. Before that, he was also a security guard and car salesman.

Similar to Halsey’s mother, Nicole, Chris also worked several jobs throughout the day when he was a husband and a father. He however along with his family still faced an economical crisis. Throughout his career, he has worked for companies including Ayers Chevrolet, Prestige Volvo, and Rossis Chevrolet Buick GMC.

After knowing they were pregnant with Halsey, Chris and Nicole left college before they would graduate. Following Ashley, the couple welcomed two more kids but both of them would be sons. Chris and Nicole’s named them Sevian and Dante.

Chris and Nicole after having kids moved around a lot and as mentioned they both worked many jobs but still found it difficult to provide enough for their family.

Halsey, once speaking about that with Rolling Stones, said that, the time when she was growing up, was really chaotic and that the house had always sh** being thrown.

According to the New Jersian, her parents worked hard for as long as they could; they didn’t have their first home until 2015.

Chris and Nicole Relationship With Their Daughter Halsey

In the past, Chris and Nicole didn’t have a good relationship with their now-famous daughter, Halsey.

They at one point even kicked Halsey out of the family when the Closer singer refused to graduate from a community college. According to Halsey’s confession with the Rolling Stones, her parents also didn’t agree with a lot of other things about her.

After her parents shunned her, Ashley took shelter at friends’ apartments and occasionally slept at her grandmother’s home in New Jersey. She however would still go through instability until the beginning of her fame.

Despite the troubled relationship Halsey experienced with her parents, the 28-year-old singer now has a good relationship with them.

Halsey even brought her father as a date to the 2017 Grammy Awards and she shares a matching anchor tattoo with her mother, Nicole.

Ashley also often mentions them or shares their TBT pictures through her Instagram.