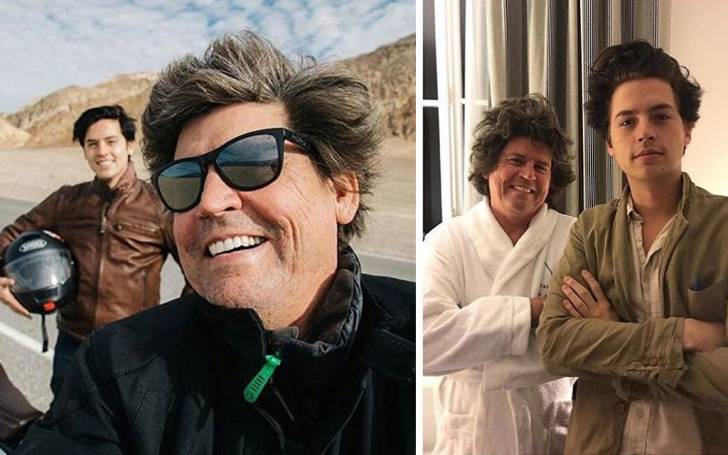 Matthew Sprouse is famously known as the father of American actors Cole Sprouse and Dylan Sprouse. His sons Cole and Dylan are twins and are well-known Hollywood actors. Further, Matthew’s sons are best known for their work in the Disney channel series The Suite Life Zack & Cody (2005-2008) and its spin-off series The Suite Life On Deck (2008-2011).

Besides, Matthew also works in the American Entertainment Industry. He is an Executive producer by profession. Well, if that’s the case, what kind of movies he has produced? Apart from his professional life, what about his personal life? Who is his wife?

How Old Is Matthew Sprouse? His Age And Early Life Details

As of 2023, Matthew Sprouse is 59 years of age. He was born on November 16, 1963, in  Long Beach, California, United States under the birth sign Scorpio. He is also known by the name Matt Sprouse.

Now, regarding his early life, Sprouse has not disclosed much information however we do believe that he grew up in his hometown and had a decent childhood.

Besides, as per nationality, he is American and belongs to mixed ethnicity.

His father’s name is Michael Theodore Sprouse. Michael was born in West Virginia to his parents Guy Ellsworth Sprouse and Opal Fern McCray.

Cole’s Father Matthew Sprouse Is A Television Producer By Profession; His Movie Work

At present, Matthew works as the VP of Programming and Executive producer at Jupiter Entertainment. He began his TV career back in 2003 as an associate producer in the TV series, DIY to the Rescue.

Following his debut, he then worked in several other TV shows like Blog Cabin, Garage Mahal, Renovation Realities, Modern Marvels, Son of Guns, and others. Later in 2012, he served in the position of Supervisor producer in the TV special, Rich and Will’s Top 10 Shootouts.

After that, from the year 2015, Sprouse started serving in the position of Executive producer. His producer work credits Wild Transport, Wild West Alaska, Justice: By Any Means, Snapped, Dead Girl, and many more. Lately, in the year 2022, his two TV series, Where We Call Home and The Williams Family Cabin were released.

At the very initial point of his career, young Matthew worked as a car mechanic as per reports. After that, he joined the academic field. To be more precise, he later became a teacher. Prior to his fame, he worked as an English teacher in Italy.

The executive producer Matthew got married to his now ex-wife Melanie Wright in the year 1990. Regarding their marriage and first meet-up, not many details are available in the media. However, as both the couple was California natives we can assume that the former flames may have come across for the first time somewhere in their hometown.

After marriage, Matthew and his then-wife Melanie went to Italy and lived there for almost two years. In the meantime, the husband-wife duo worked as English teachers in Italy. While still in the foreign land, the married duo welcomed twins and then returned back to their native land.

Till their return to California, everything in their married life was going smoothly but as time passed, their relationship started deteriorating. Sadly, the couple separated in the year 1997 after seven years of their marriage.

Did Matthew Sprouse Marry Again After His Divorce? If Yes, Who Is His New Wife?

The answer is Yes. After Matthew legally separated from his wife Melanie, he again got married. In fact, he is still married to his second wife and still they are together.

But unfortunately, the identity of his now-wife is still undercover. Neither her face nor her name is disclosed in the media till today.

Matthew Sprouse Is The Father Of Twin Son

From his marriage with his ex-wife Melanie, he became a father of twins Cole Mitchell Sprouse and Dylan Thomas Sprouse. His sons were born on August 4, 1992, in Arezzo, Tuscany, Italy. The twin arrived in the gap of 15 minutes and are 30 years of age as of 2023.

Talking about his sons in detail, they have now become established actors in Hollywood. Till today, both of them have worked in several movies and series. If talked individually, Sprouse’s older twin son Dylan has acted in movies and series like Apple Jack, The Master of Disguise, Banana Split, My Fake Boyfriend, The Suite Life franchise, and several others. He is also the owner of the wine company, All-Wise Meadery.

Similarly, Matthew’s younger twin Cole is equally a renowned Hollywood actor. Like his brother Dylan, he also has appeared in many movies and series. Lately, he earned wide recognition for portraying the character Forsythe “Jughead” Jones III in Riverdale (2017-present). While working on this series, he was in the limelight for dating his co-star Lil Reinhart. Currently, he is no longer together with Lil rather there is a report that Cole is in a relationship with the model Ari Fournier.

Dylan and Cole Started Their Acting Career at 8 Months; His Kids Grew Up with their dad

When his twin was born, Matthew and his now ex-wife Melanie were living in Italy. Four months after the arrival of Cole and Dylan, the couple came back to California. In the meantime, Matthew and his wife went through some financial issues, and due to this reason, his wife put their twin sons into acting when they were just 8 months old. In an exclusive talk, his son Cole revealed,

“My brother and I were put into acting when we were 8 months old by our mother because we needed the money.

It could be the financial issue that the beautiful family of four was ruined for good. As per reports, Sprouse’s then-spouse also had issues with alcohol and drugs as well and because of this, the couple got divorced. The custody of his children was given to him by the court so Matthew raised his children giving them the love of both mom and dad.

The celebrity father Matthew is on Facebook with 104 followers. Though he has a Facebook account, he doesn’t seem to be active on it. To date, Sprouse has just uploaded four photos on his Facebook in different years, from 2017 to 2021.

Since Matthew is an executive producer in the American Film Industry, so there is no doubt that he has earned a good amount from his profession. Hence, he is reported to have a net worth of $1 million as of 2023. On the other hand, the Sprouse twins have an estimated fortune of $8 million.