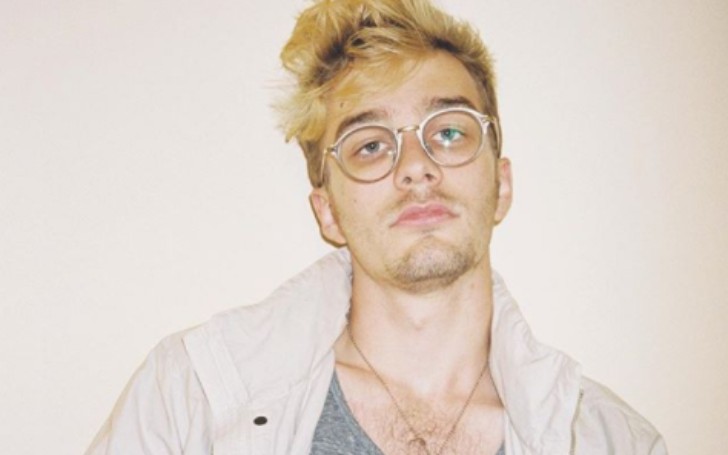 When your mom and dad are a big name in the industry, it is imperative people will ask about you. Likewise, people have been asking about Joe for the past few years.

The star kid has grown up and has turned out to be a handsome man. In addition, he is also into music so it makes him all the more attractive. Well, without further ado, let’s get right into the article and find out what is he up to these days?

What is David and Patricia Hunt’ Joseph Charles Hunt: His Wiki-Like Bio

Joseph aka Joe was born in June 1997. There are conflicting reports about the precise date of his birth. Various tabloids state June 2nd while one of Joe’s Instagram posts revealed he celebrates his birthday on June 5th.

gotta overdress for your own birthday right?

As far as his ethnicity is concerned the 23-year-old is Caucasian. Joe’s traces his ancestry back to Old England. Moreover, Joe is eligible for both English and American nationality.

Joseph has three brothers: Two older bros and one younger

David Hunt and his wife Patricia are proud parents of four boys. The pair welcomed eldest Samuel David Hunt in September 1993, and two years later came John Basil Hunt in May 1995. The youngest Daniel Patrick Hunt was born in January 1999.

All four of them are grown up and have left the Hunt household. Back in 2017 in an interview with Live with Kelly and Ryan, Patricia talked about being an empty nester.

Meanwhile, the eldest Samuel is a part of the musical group, Forest Fire Gospel Choir, and the youngest Dan is quite into photography. Not much is known about John Hunt.

Since 2018, Joe is a student at the University of Southern California, Dornsife College of Letters, Arts, and Sciences / Thornton School of Music. He is pursuing a BA and majoring in English literature and minoring in Music Industry and Music Recording.

Before enrolling at the college, he was a student at Campbell Hall from 2011 to 2015. For a few years, he also worked as a volunteer at Campbell Hall. His primary job was to guide freshmen and set them up for a better overall experience for the next four years.

David and Patricia are quite proud of what their children have achieved so far, especially Joseph. Yes, he is really making strides in the entertainment world. He is a multi-talented man with three different skills under his belt, Live Production, Engineer, and Drummer.

From 2017 to 2018, Joe was the drummer for singer Mikaela Mullaney Straus aka King Princess. He has been playing drums for the last 13-years or so. He even went to music tours in North American and Europe with King Princess. In July 2018, Joseph’s mom Patricia shared a picture from one of the concerts. He added a picture with her doting son Joe.

Most recently, he worked as the Director of Production at USC Undergraduate Student Government from 2019 to April 2020.

Aside from the above-mentioned work, his other works include Background Extra in a local TV station, Internship at BBC Studios in LA, Studio Assitant at Mike Malchicoff, and as an Artist Marketing Intern at Fender Musical Instruments Corporation.

Is Joseph Charles Hunt dating someone? About his relationship status

There is no right or wrong answer to this question. Going through Joe’s Instagram account @valley_heat, we found him pretty close to a woman named Kira Stiers.

Now, we’re not announcing they are girlfriend and boyfriend, but they do seem quite close to each other. In one of his posts, he even congratulated her after she graduated from college.

Apart from this, he also added a picture with her in October 2018 with the caption, Be Home Soon. Many of his friends even commented, ‘great couple’ or ‘my favorite couple.’

Well, they might just be great friends or there was something romantic between the two, the answer is not clear.

English actor David Hunt and Patricia Heaton exchanged vows on October 13, 1990. The duo met for the first time in Manhattan.

What happened was, Patrica was freshly off her college Ohio State University and moved to New York. Back then, David used to live in Manhattan. When Patrica moved to NY she sublet an apartment from a guy. The guy was, you guessed it, Mr. David Hunt.

The pair were instantly smitten with each other and subsequently started dating.

Both of Joseph’s mom and dad are big names in the entertainment business. His father, David is famous for his roles in The Engagement Ring, Moms Night Out, and The Dead Pool.

His mom, Patricia, on the other hand, is renowned for her role in Everybody Loves Raymond, The Middle, and Mom’s Night Out. She is also an author and wrote a few books including Your Second Act: Inspiring Stories of Transformation and Motherhood and Hollywood: How to Get a Job Like Mine.