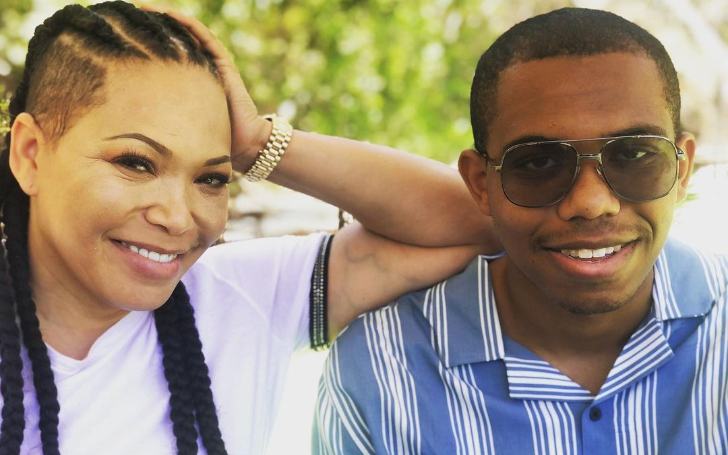 Xen Martin is famous for being a celebrity son as his both parents are well-known faces in the American Entertainment Industry. His mother Tisha Campbell (aka Tisha Michelle Campbell) is an American actress famous for the ABC comedy series My Wife and Kids, Rita Rocks, Dr. Ken, and The Protector. Further, she is also a dancer and a singer. Moreover, Xen’s mother is a several awards winner including Independent Spirit Award and NAACP Image Award.

Likewise, Xen’s father Duane Martin is also an American actor who is popular for his role as Willie in the 1992 film, White Men Can’t Jump, Philips in The Inkwell (1994), and Kyle Lee Watson in Above the Rim (1994). He is also a former basketball player who played NCAA Divison III basketball at NYU. Talking about Xen’s parent’s togetherness, as of 2022, his parents are no more together as their divorce was finalized in December 2020 after being in 23 years of a marital relationship.

Apart from his parents’ personal and professional details, who actually Xen Martin is? What does he do? Is He still Autistic? Today, this article will talk in detail about the life of Tisha Campbell and Duane Martin’s autistic child, Xen Martin along with his age, college, his disorder, Instagram, relationship status, and many more.

Who Is Xen Martin?

As we said above, Xen is the son of Tisha Cambell and Duane Martin. He was born on August 8, 2001, in Los Angeles, California, the United States which makes him 21 years of age by 2022. Unfortunately, at the age of 18 months, he was diagnosed with autism. So, his parents raised him together with so much love, care, and support.

Similarly, he is a Leo and is American by Nationality. Xen comes from African American ethnical background.

Xen Martin Was An Autistic Child? Is He Still Struggling?

When Xen was 18 months old when he was diagnosed with autism. His mother, Tisha started suspecting something different in Xen after he got the Hepatitis B injection as an infant. Then, he was taken to the hospital and the doctors confirmed he has autism. They had told his parents that he could never be able to speak and learn. So, throughout his childhood, he struggled with communication.

In this regard, his mom Tisha shared the struggle that her beloved son went through. She wrote,

But today, the situation is not the same. Xen is now much more healthy and can communicate as per requirements. He even goes to college. In an interview with Essence, his parents Campbell and Martin told,

Xen was non-verbal; he would flap his arms and rock back and forth. He’s never been in a special needs class because I wanted him to model after typical kids and now he’s a typical kid.

Xen says that he’s not autistic anymore. This is my baby’s reality.

Xen’s Sibling: He Has A Younger Brother

Xen has a younger sibling named Ezekiel Czar Martin. Ezekiel was born on the 8th of September, 2009. At the time of his birth, Ezekiel was 9 lbs., 9 oz, and 23 inches long. As per his mother, during his birth, he was so big that the newborn clothes didn’t fit him.

In this regard, Tisha told People,

“He can’t fit newborn clothes; he’s wearing clothes for three month olds. His cheeks are so fat. He is so healthy. He is just perfect.”

Xen’s actress mom is the co-founder of the non-profit organization named Colored My Mind which spread awareness of Autism.  She has been actively involved in raising awareness about the disorder since the diagnosis of her lovely child.

Xen Martin’s Achievements Despite Growing Up With Autism

In general, for autistic children, it’s hard for them to communicate and learn new skills. But, in the case of Campbell’s firstborn child, it goes just the opposite. According to his mom’s Instagram, he is doing better despite being autistic.

On January 26, 2021, Martin’s mom Tisha shared his achievements on her Insta saying,

My BABY!!!! Just got an “A” in his public speaking class!!! My baby who doctors said may not EVER talk!!! That’s MY BABY #AUTISM

Not only this but Xen has succeeded in getting a driving license. Further, his achievements also counted on his academic excellence. He’s never been in a special needs class and as a typical kid, he went to school and now is a college student.

Xen Martin’s Educational Details: Which College Does He Go to?

As of 2022, Xen Martin is already a college student. He graduated from a high school named California Virtual Academics in midst of Corona epidemics in February 2020. His achievement was celebrated by both of his parents on their respective social media accounts. In this happy moment, his father Duane wrote on his Instagram,

CONGRATULATIONS XEN MARTIN ON GRADUATING 👨🏽‍🎓FROM HIGH SCHOOL AND MOVING ON TO COLLEGE….

On the other hand, Xen’s mother Tisha talked about his entry into his dream college. She wrote.

Currently, Xen is studying Zoology at Moorpark College in California.

Xen Martin’s Career: What Does He Do For Living?

Talking about his professional career, he does not seem to be seriously involved in any field as he is more of a student than a professional. He is an aspiring Zoologist and currently attending college. However, his mommy’s recent Instagram post states that he has started working with his professor. The Instagram post says,

‘My son just got a job working with his professor! #proudmom’.

Xen Martin’s Relationship Status: Is He Dating A Girlfriend?

Xen is likely to be in a romantic affair with a girl whose name is yet to reveal. On the occasion of his 20th birthday, his mom put some praising words for Xen where she mentioned Xen having a girlfriend. She had written,

Your immense desire to be a STRONG DEPENDABLE man and to take care of me, your little brother, and to be a considerate, loving, and trustworthy person to your girlfriend makes me PROUD!

From this statement, it is clear that Xen is in a relationship and is a very loving and caring boyfriend to his girl.

On the other hand, his famous parent, mother Tisha is on Instagram @tishacampbellmartin with 2.2 million followers, and his father Duane is active on his Insta account under the username @duane_martin with 170k followers.

As per our information, Xen’s net worth is yet to be estimated. He is currently a college student so is obvious to say that there’s a lot of time for him to start his career.

On the other side, his mom, Tisha Campbell’s estimated net worth is $1.5 million while his father Duane has a net worth of $15 million.