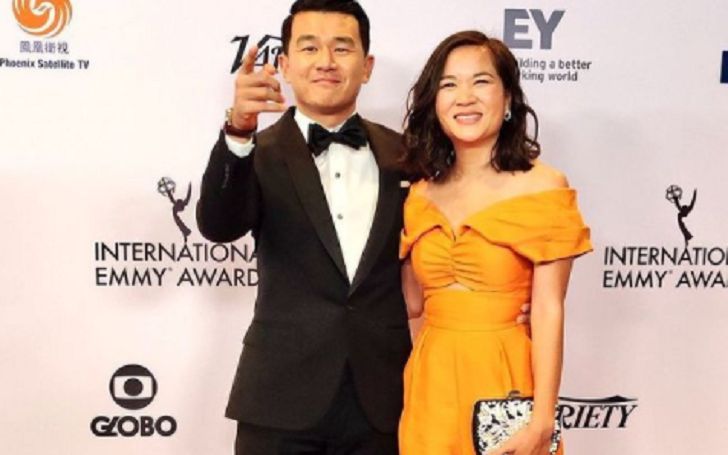 Ronny Chieng is one of the quickly-established stand-up comedians from Malaysia. He has gained massive success since his debut in the entertainment industry. He is better known for his hilarious presence on comedy shows, especially his crazy performance on Comedy Central’s The Dail Show brought the entertainer massive fame.

Aside from his successful comedy career, many of his fans are wondering if the funny man is married? If yes, who is Ronny Chieng’s wife?

Keep reading to know everything about his personal life!

Ronny has been married to Hannah Pham since 2016. The same year, the comedian revealed that the duo had three different wedding ceremonies in the Netflix stand-up special “Asian Comedian Destroys America.” The couple first tied the knot in Melbourne, Australia which is where his wife Hannah’s family members live.

However, the stand-up comedian wasn’t able to attend the traditional Chinese tea ceremony in Melbourne at a time due to flight delays.

For the second time, the pair exchanged their vows in Malaysia, where Ronny’s family resides. Back in late 2019, in an interview with Public Radio Tulsa, the comedian talked about marrying his wife in three different ceremonies,

“It’s more that when your families are spread out across the globe as ours are – Chinese weddings are a lot for the parents to kind of brag. And so as part of our duty to them, we make it easier for them to brag. So her family’s in Australia. OK, we’ll go – we’ll have one wedding there for them. My family’s in Malaysia. We’ll go to Malaysia and have one for them.”

Ronny and Pham got married thirdly on 9th September 2016, at the NYC City Hall. Their third ceremony in NYC was “for green card purposes.”

When did they first meet? The duo engaged a year before their Marriage

Neither Ronny nor his life partner Hannah has ever talked about how and when they first came across. Apparently, many sources suggest the future couple acquainted with each other at the University of Melbourne, from where they both graduated with the same degrees.

Talking about their engagement, Ronny proposed to his then-girlfriend after dating for some time in December 2015.

Like many celebrity couples, the duo has also kept their love life a little bit private. Over the years, their public appearances have been far and few between. One of their rare joint appearances was in Washington, DC., where they were seen sharing a kiss at the U.S. Premiere of ‘Mission: Impossible – Fallout’ in July 2018.

Besides, although the couple has been in a marital relationship for over four years, the two have yet to share any children, neither show any signs of having kids in near future.

Back in April 2018, the comedian told The New York Times that he and his spouse are pretty into cooking since their move to New York from Australia.

“Ever since we left Australia, we’ve been really into cooking Chinese food. We’ll make mapo tofu or won ton or steamed fish.”

Tonny revealed that his partner also created her own YouTube channel called, Pham Bam Kitchen. The channel which boasts a range of culinary videos mostly focuses on delectable Asian dishes. And it has 1.99k subscribers as of 2022.

In an introductory video of her channel, Hannah revealed how she learned to cook her favorite Asian dishes,

“When I moved to New York, I began to really miss home cooking so I watched a lot of YouTube videos, FaceTimed with my mum, and learned how to make my favorite Asian dishes.”

Here is the video,

They Both Are Law Students

Ronny and his spouse Hannah both studied law at the University of Melbourne in Australia. Ronny earned his Bachelor of Law degree from the college in 2009 while his future-wife Harm obtained the same degree in the following year. Furthermore, both of them have also earned a degree in Bachelor of Commerce from the college.

After that, Chieng studied at the Australian National University, graduating in Legal Practice in 2012. Although Chien was all set to become a lawyer, he eventually went for comedy landing his first gig at a comedy festival in Melbourne, Australia in 2013. At the time, he performed with Trevor Noah.

In July 2016, Ronny was included in the list of 10 Comics to Watch made by Variety.

Are Ronny And Hannah Still Married in 2023?

The husband and wife are still married and are apparently leading a beautiful marital relationship. Having been married since 2016, the couple share a great bond and there have been no rumors of conflicts between their relationship.

Who Is Rapper Logic’s Wife Brittney Noell? Untold Details About Her