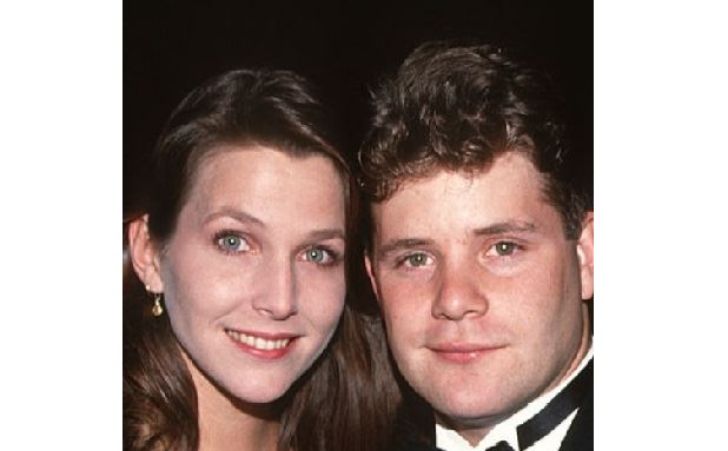 Christine Harrell is a TV and film producer and also the wife of The Lord Of The Rings and The Goonies actor Sean Astin. Harrell and Astin have been in a marital relationship since the early 90s and together are parents to three children.

Sean does look like a Hollywood star who is from a long and committed relationship and also to a more degree a father material. Together, Astin and Christine indeed are among the candidates for the couple’s goals.

So how come they came to be a pair with so much love in between? Where did it all begin for Christine and her husband, also what’s her own story? Scroll it down for the answers.

Christine is the daughter of Nancy Miller and firefighter Frank Harrell. Her actor husband, Sean in his book, There and Back Again: An Actor’s Tale, reveals his father-in-law and Harrell’s father, Frank was a man who had worked hard his whole life.

He was a career firefighter, who once spent his life’s savings and much of his family’s emotional equity in a failed attempt to own and run a grocery store. Astin’s wife grew up in Rolling Prairie, Indiana. She spent her childhood and youth in the Hoosier landscape of Rolling Prairie.

Harrell went to New Prairie High School. She used to be a teen beauty pageant and was also a model. In fact, she is the winner of Miss Teen Indiana (1984). Harrell won the title when she 17.

Christine Harrell Modeling Career At Her Home In Indiana

She originally was a modeling student under Evelyn LaHaie of Valparaiso who is a well-known personality herself. It was she who came with the idea to name The Jackson Family as the Jackson Five, after she met Joe Jackson and his singing sons, including then-6-year-old Michael in the mid-’60s.

Further, it was Evelyn who booked the Jacksons, just as they were launching their singing group career, to perform at her agency’s fashion show at The Big Top department store in Gary, Indiana. For decades, LaHaie ran her Evelyn School of Charm and Modeling at the Hotel Gary in Gary.

She helped give many young talents their start in the spotlight including Harrel. LaHaie was serving on the board of directors of the Modeling Association of America when Harrel was trying out for modeling.

She Left Indiana To Work In The Acting Genre

After having studied at Indiana University-Purdue University Indianapolis, Harrell left Indiana and moved to Los Angeles to begin her career in the film and television industry.

During her time on the west coast, she studied at UCLA and later graduated with a B.A. in History & a B.A. in English American Literature and Culture — reports IMDB. As for her acting career in the film and television industry, she first worked at Special Artists Agency as assistant to Elizabeth Dalling, CEO, senior partner, and head of international and celebrity representation.

There, Sean’s life partner was as an Executive Assistant. After marrying Sean, Christine produced the 1994 short film Kangaroo Court with her husband in the director’s seat. Later the couple went on to receive an Oscar nomination for Kangaroo Court.

In September 2018, Christine’s husband announced they had spent the last ten years working on a full-length movie based on Lois Lowry‘s Newbery Medal-winning novel Number the Stars. The project apparently was going to be a full-length feature and Astin’s directorial debut though the parents of three are yet to come up with an update.

What Is Christine Harrell Doing Now?

As for now, Harrell is the Vice President and CFO of Lava Entertainment, a performing arts company which is based out of Los Angeles.

She has been with the company for more than two decades, where her actor husband is CEO and President.

While raising her children, the Indiana-native was also working for a few or two community services, e.g, the Girl Scouts of Greater Los Angeles and local government. For the organizations, she lent her artistic talents to city beautification.

Sean was on the promotional tour of his 1990 war drama film, Memphis Belle.

He was roaming Thailand, Singapore, Japan, and Hongkong. It was during those trips that he first got to talk (though not face-to-face) with the woman he would eventually marry.

The Goonies star says he was sitting in the bathtub of a fancy hotel in Tokyo, watching CNN and listening to Bernie Shaw as he crawled around the floor of the Al Rasheed Hotel to pick up a phone. The voice on the other end was of Christine who was then working for a commercial agent in Beverley Hills who had set up meetings for Astin in Japan.

But it wasn’t until late January 1991, that the UCLA graduate finally met Sean in person. Sean was then nineteen while Christine was twenty-two. The Rudy actor in his book writes after the first encounter, Harrell and he was almost instantly inseparable. He says they became life partners in every way imaginable.

They also like telling people that they were comfortably codependent. Along the way, they moved in together, traveled to Asia, backpacked across Europe, and as per Astin himself, “fell madly in love.”

Christine Louise Harrell married actor Sean Astin, the son of John Astin and Patty Duke, at a ceremony on July 11, 1992, at her mother-in-law’s Idaho farm.

As mentioned, together they have three children, all daughters. Sean and Chris had their first daughter actress Alexandra “Ali” Astin in November 1996. The couple welcomed their second girl, Elizabeth Louise Astin in August 2002. Three years later, Harrell and her husband had their youngest daughter, Isabella Louise Astin in July 2005.

Christine’s daughter, Isabella Louise, was born a month prematurely. The family resides in Los Angeles, California. They, however, occasionally make it back to Harrell’s native Northwest Indiana.

Is Christine In The Lord Of The Rings?

Many have mistaken Christine for one of the casts on her husband’s career-defining film franchise, The Lord Of The Rings. To date, however, she is yet to have an official screen credit.

On the other hand, it was instead her first daughter, Alexandra Astin who was on the film. She played Elanor Gamgee, the daughter of Sean Astin’s character, Samwise Gamgee in Jackson’s The Lord of the Rings: The Return of the King.

During the theater period of The Return of the King, Alexandra, the Harvard graduate, also appeared and attended her father’s book signings. She was also on the promotional tour of There and Back Again: An Actor’s Tale.

Alexandria as for the present is a rising theater artist who has acted in numerous critically acclaimed plays.

Although Sean is certainly an A-list name in Hollywood with a millionaire status, the mother of his three daughters, Christine Harrell is quite an unsung celebrity as she is found more behind the scene works.

Multiple sources do claim Harrell’s significant other’s net worth sitting at over $10million though no such articulations have at any point arisen on account of Lava Entertainment’s CFO.

In any event, however, Harrell naturally ought to do fine given she is in a seriously prestigious and yielding position in quite a lucrative line of profession.

Her late mother-in-law, Patty Duke, Sean’s mother was the youngest Oscar winner at the time when she won it for the best actress in the 1962 film, The Miracle Worker. She died at 69 in March 2016.

Christine’s grandfather once tried to talk her husband to consider baptism.

Allegedly, Christine’s husband only made $250,000 for all the Lord Of The Rings films.