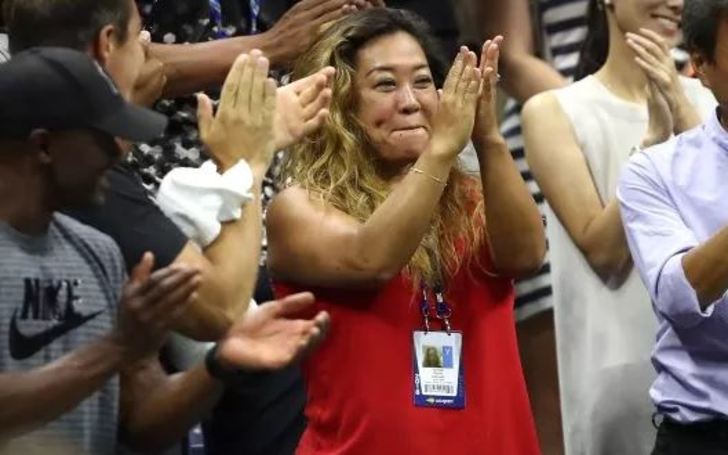 Tamaki Osaka is the mother of the Women’s Tennis Association no 1 player, Naomi Osaka. Tamaki’s daughter, Naomi is the first Asian player to hold the top ranking in singles as well the first player from Japan – man or woman – to reach No. She is a four-time Grand Slam singles champion.

In a short span, Tamaki’s daughter Naomi has become one of the most recognizable tennis stars on the planet. But there are two unsung heroes that helped cement her career. And even the 2019 Australian Open, herself, wouldn’t hesitate to give all the credits to them, her parents, Tamaki and Leonard.

While Leonard was the one who introduced Naomi to the game, Tamaki from the sideline was no less crucial to keep afloat her daughter’s dream. Take a look at what role Tamaki Osaka played while raising a future tennis superstar. Read all about her life from her upbringing to the historic moment after the final of the 2018 US Open.

Naomi’s mom Tamaki grew up in Nemuro, a waterfront town on the eastern tip of Hokkaido, Japan’s northern Island.

Tamaki grew up in a country with one of the least ethnically diverse populations in the world, Nemuro. It was at the time a bastion of homogeneity.

She only got to have a more diverse face-off once she moved to a high school in Sapporo, Hokkaido’s capital. Although it is not known what year, she was born in but she celebrates her birthday on January 31st.

Tamaki Met Her Husband Leonard Francois As A Student

While she was in high school Tamaki met Naomi’s father, Francois, a college student from New York. They shortly formed a relationship. However, Tamaki’s folks opposed her relationship with Francois, which prompted their alienation.

It was because of the feeling of rebellion in Japan—tracing all the way back to the 1630s when the Tokugawa shogunate removed the archipelago from the rest of the world.

Back then, the sense of separatism cultivated over the centuries hadn’t fully eclipsed especially in places like Nemuro.

Tamaki says she, at the time, was in her early 20s. Her father wanted to talk about omiai, the matchmaking process that would lead to her arranged marriage. But after learning about their daughter’s secret relationship with a black man, her father became outrageous. They then cut her off from the family for bringing disgrace to the family.

After having a rift with her parents, Tamaki and Leonard moved to the south of Osaka where they worked a lot.

When Did Tamaki Osaka And Leonard Francois Get Married?

It is not known when and where she married Francois. However, it is believed that Tamaki wed Leonard Francois in the month of June.

As such in mid-June, 2018, Osaka’s mother, Tamaki, posted a tweet. It featured a collage of three photos: one of Francois, shortly after the two met, one of a younger Tamaki, and one of their two toddler girls. Above the nostalgic photos, the Hokkaido native wrote a message. It read:

“was ‘disgrace’ to the family, had been in the desert&jungles for decades, I’m still surviving.” It was followed by two emojis — a flexed arm and a red heart — and a hashtag: #HappyLovingDay.

The New York Times insinuates Tamaki posted the tweet so as to commemorate the date of her wedding and the word “liberty.”

After moving to Osaka, Leonard and Tamaki had two daughters, Mari and Naomi in 1996 and 1997 respectively. While raising them, Tamaki would have conversations with Naomi and Mari in Japanese while they were at home, set them up kelp and rice-ball snacks for school. She additionally dressed them in kimonos for global days.

Tamaki’s Husband Started To Train Their Daughters From Childhood

When Naomi was three, her mother and her father brought her and her sister to Long Island. There, Tamaki’s husband decided to teach tennis to his little girls after hearing the story of Richard Williams; the father of Venus and Serena Williams.

After that, the family moved to southern Florida in 2006 to focus on their girls’ tennis careers. Tamaki and Leonard trained their daughters most of the day on the Pembroke Pines public courts. They additionally home-schooled their daughters.

Is Tamaki Osaka Still Not Talking With Her Parents?

After her girls grew in strength and talent, and in time, Tamaki decided they should meet their Japanese family. At this point, she hadn’t talked to them for nearly 15 years. And so, when the future Grand Slam winner was about 11, she and her sister visited their grandparents in Japan.

It, however, wasn’t as joyful a homecoming as Tamaki might have hoped. Her parents took an interest in the girls but ridiculed their regime of homeschooling and tennis training. They thought the sport was a hobby, not a profession.

Why Her Daughters Didn’t Have Their Father’s Surname

Since their infant times, Naomi and Mari have been more familiar with their Asian heritage. In fact, they even took their mother’s surname instead of taking their father’s last name. Osaka is a Japanese surname that, improbably, is the same as the city of their birth.

Tamaki and Leonard did so hoping it would become helpful for enrolling in schools and renting apartments. Their kids, however, ended up getting bigger in America, though their name would become a constant reminder of the homeland that they would one day represent.

Along With Her Father, Naomi Also Credits Her Mother, Tamaki For Her Success

The former world no 1 has credited her mother for supporting her passion for her sport on numerous occasions.

“Growing up, I saw my mother work incredibly hard to support me and my passion for play,”

She added how her mother, Tamaki always put others first and encouraged her to embrace her diversity. The five-foot-eleven-inches athlete also said her mother worked hard to pay for flights and accommodations during tournaments. She would get up at four in the morning in order to earn the money needed to finance her daughters’ tennis careers.

Tamaki, who had an office job, had to support the family financially. Leonard’s wife would leave for work at four in the morning. A Netflix documentary retelling Osaka’s rise to success reveals Tamaki even slept in cars back in those days.

Naomi, in an interview, said the possibility of earning money to help her parents in their later years had been a strong motivation for her.

Tamaki and her Haitian husband, Leonard are still married. The pair reportedly live in Long Island. It, however, is unclear, what the couple does in the present now that they don’t need to worry about their girls; at least financially.

Their profession is unclear but it is believed that they both serve some managerial purposes to their Olympic Cauldron – daughter.

Her Daughter Is The Highest Paid Female Tennis Player

In Aug 2021, Forbes announced its yearly rankings of the most earning tennis players. Tamaki’s daughter, Naomi positioned herself among the world’s five highest-paid tennis players (men and women). The list entailed athletes who got more cash off the court than on it.

Osaka who was then-No. 3 — outranked the likes of Serena Williams, Rafael Nadal, Novak Djokovic to be the second tennis player who earned the most in a given year. With her income — $5.1 million on the court and $55 million off the court in 2020, she was only behind the Swiss international, Roger Federer who made more than $90million alone off the court that year.

Tamaki’s daughter, Naomi, moreover, has – – deals with brands like Nike, Sweetgreen, Barbie, and Nissan, among numerous others.

Not to mention, she is one of the world’s most marketable sportswomen. In 2020, she was eighth among all athletes in endorsement income.