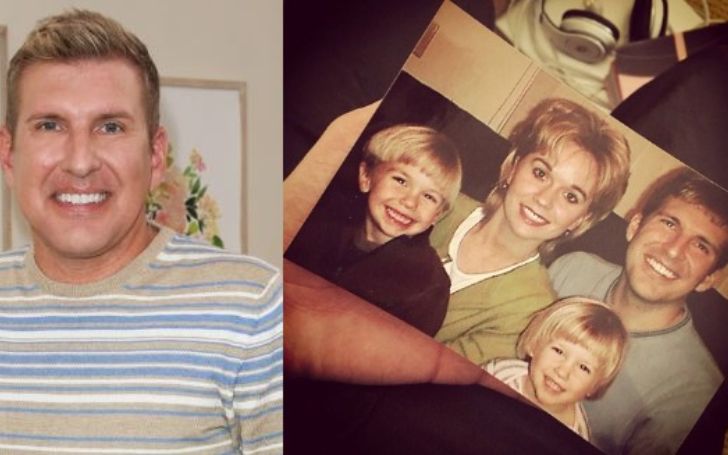 Gene Raymond Chrisley is the late father of the reality star, Todd Chrisley, known for his show, Chrisley Knows Best. Raymond’s son, Chrisley has garnered a fair share of attention be it for the success of his reality show or his infamous public falling out with his daughter Lindsie or his numerous health issues, or his recent shocking tax fraud case.

Speaking of Todd’s show, all his family members have appeared on his show except for his father who unfortunately passed away before it ever happened. As a result, not much about the Chrisley patriarch is known. Todd nonetheless has spoken about his late father on his show numerous times and almost always in a fond manner.

His family members attest that Gene was always there for his loved ones, especially for his grandchildren. People close to him always regarded him in high regard for his devotion to his family and his country. The Chrisley family often remembers him through pictures and social media posts. So here lies more wiki regarding the now-deceased war veteran, Gene Raymond Chrisley.

Gene Raymond Chrisley Was Born In The Mid 30s

The late father of Todd Chrisley, Gene was born on May 9, 1935, in South Carolina. He was the son of Leonard and Allie Mae Childers Chrisley.

Todd’s father has one brother named Miles Chrisley who at the time of Gene’s passing was residing in Easley, South Carolina. The former army man also has two sisters, Kathryn McAllister of Alpharetta, Georgia, and Jane Wilder of Greenville, South Carolina. Besides the aforesaid names, Gene also had two more brothers and two more siblings who though died before Gene himself.

Gene Raymond Chrisley Was In The Army; What Else Did He Do For A Living?

As a military man, Gene fought in the Korean War and earned a bronze star. Todd once revealed his father was just 16 when he first saw the war.

It is a bit ambiguous what Gene did after returning from the war. Some believe he turned into a businessman venturing into bedding and bathing home fashions. However, there’s no knowing what career he really pursued.

Todd’s father, Gene died of cancer on July 11, 2012, in Atlanta Georgia at Emory University Hospital. He, at the time, was 77 years old and within the confines of his family. According to reports, Gene lost his life to cancer however it hasn’t come to light what type of cancer it was.

Raymond’s kids and the rest of his family still speak highly of him. In fact, the late South Carolina war veteran’s family still pays tributes to him via their social media and also talks about his accomplishments.

Gene Married His Wife, Faye In The 60s

Gene and Faye Chrisley married each other in the ’60s. The more specifics regarding their nuptial date however is a mystery. Gene was nine years Faye’s senior.

Some writings claim Faye, real name, Faye Elizabeth Litchfield Smith, was married twice before she would become the wife of Todd’s father.

One of Gene Raymond Chrisley And Faye’s son Died

When together the couple was parents to three sons, Todd, Randy, and Derrick. However, only two of them are alive now. Derrick passed away when he was just four months old in 1971. Randy on the other hand seems to be living far away from his media-famous brother and his other family.

Gene was also the grandfather to eight grandchildren.

Raymond’s widow, Faye is a real estate investor who is also one of the casts on her son’s show, Chrisley Knows Best. The widow of Gene is a South Carolina born. She used to work in a textile mill to make ends meet during the time when Gene was in the army.

Since the death of Gene, his widow, Faye has been reportedly trying online dating. She apparently also joined Christian Mingle in search of a new man. A while ago, Todd affirmed to his mother finding a guy from a dating site. He in fact also had gone as chaperone to one of his mother’s dates.

During one of the episodes of his show, Todd, however, said that the man his mom was dating wasn’t his father despite being a nice gentleman. The real estate businessman has said that Gene was the only man that his mother, Faye ever dated.

Even Faye has admitted to no other guy being as close to her as her late husband. All that the widow apparently wanted was companionship. It though is unclear who Faye’s new love interest is.

Gene and his widow, Faye had Todd on April 6, 1969, in Georgia. Todd once mentioned he and his late father were inseparable. He revealed his dad, Gene was his biggest supporter and fan. The South Carolinians never missed his kids’ horse shows or their school events.

The five foot ten inches tall, Todd is now a reality star and quite a wealthy real estate tycoon. As discussed the now 53 years old runs a reality series, Chrisley Knows Best which centers around his rich Christian family. Todd’s IMDb states he is a self-made millionaire.

Gene’s son has also appeared in other reality shows like Growing Up Chrisley, Dish Nation, Celebrity Page, Celebrity Call Center, and According to Chrisley. Todd is married to Julie Chrisley who is also an actress and TV personality. They wed on May 25, 1996. Together, they have three children, Chase, Savannah, and Grayson.

Before Julie, Todd was married to Teresa Terry; they had tied the knot in 1990 but separated in 1996. When together, they welcomed two children, Lindsie Chrisley and Kyle Chrisley.

Gene’s famous son and his wife recently entangled themselves in quite a trouble relating to tax fraud. In Nov 2022, the celebrity couple, Todd, age 53, and Julie received twelve years and seven years in prison respectively.

This was months after the court found them guilty in their $30 million tax evasion case.

Similar to Todd, it has been reported that his late father, Gene, too faced and spent years in prison for burglary, armed robbery, larceny, motor vehicle theft, assaulting a police officer, prison escape, and cheque fraud, among others. This claim comes from a random Redditor who albeit provides a seemingly legit piece from the old newspaper that details what seems like Gene’s crime.

According to this archived journal, Gene apparently committed all these crimes in Georgia, South Carolina, North Carolina, and Alabama. The father of three at the time was 36 years old. While the report has some bit of credibility on the surface, it is unclear if the man whom the piece mentions is actually Todd’s father.

Derrick was the youngest child of Gene and Faye. Todd has seldom talked about his late brother Derrick and it is to date open to question what really caused his demise.

In addition to Todd and Derrick, Gene had one more son, Randy. Todd however was reported to have a bit of a feud with Randy in the past. It purportedly began when Randy’s wife, Pamela threatened Todd and his family to expose their one notorious scandal. The police however later arrested her for blackmailing. Randy himself in 2016 went behind the bars for stealing $22 worth of candy. Two years earlier he had been diagnosed with cancer but now he reportedly is free of it.

For some time now, there have been some rumors going on regarding the death of one of Gene’s grandchildren through his reality star son, Todd. However none of Todd’s sons or his daughters, fortunately, have met such tragedy. They all are still very much alive and kicking. But some of them did go through near-death experiences in the past.

For instance, in Nov 2022, Todd’s son survived a horrific car accident but not before he would sustain multiple injuries. Furthermore, the same month, Gene’s daughter-in-law and Todd’s current wife, Julie said their adopted ten-year-old daughter was being suicidal over the thought of her parents going to jail.

There also has been another misinformation going on which claimed that Todd’s daughter, Lindsie (born through his ex-wife) is no more alive. However she, too, is seemingly in better health. The only thing is that Lindsie doesn’t have much of a good relationship with her now-convicted father or his current wife.