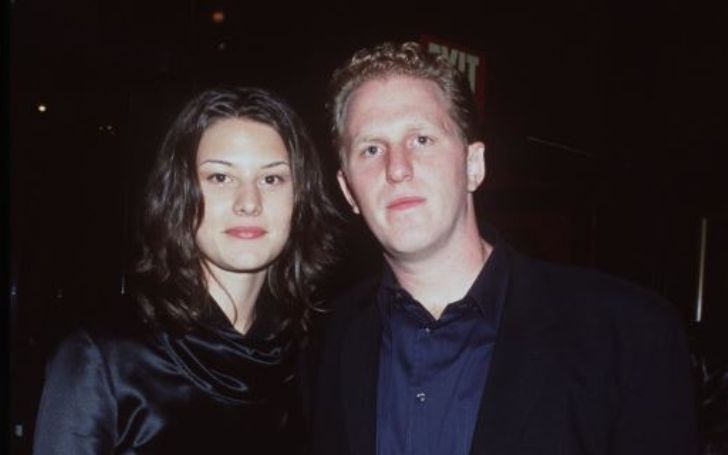 Nichole Beattie is a TV and film writer and an executive producer who has had a long career in the show biz. Although Beattie started writing as early as the 1990s it wasn’t until the mid-2000s that she gained attention. Her big break was the opportunity to write an episode on Sons of Anarchy in the year 2008. Beattie’s career as a screenwriter gained significant height with many TV shows, including The Walking Dead, Law and Order: Organized Crime, For All Mankind, Rubicon, and Prime Suspect.

Nichole Beattie has also had many opportunities to work as a producer, co-producer, supervising producer, and co-executive producer. Over the years she has become a sought-after Hollywood writer. Though in spite of her now high-profile job, she has gone through a fair share of tragedies.

One another identity of hers or the other way people define her is as the ex-wife of actor, Michael Rapaport, known for films like Higher Learning, Metro, Cop Land, Deep Blue Sea, The 6th Day, Dr. Dolittle 2, Big Fan, and The Heat. Beattie’s ex-husband and actor Rapaport has made over 100 appearances in films and TV shows.

Scroll down more to learn about her wiki; adventures as a writer, her chapter as the wife of Rapaport, the children of his mother, her own childhood, her family struggles, and more.

Though there are some other records that claim Beattie was born in 1979 in Stillwater, Minnesota. She, however, grew up mostly in the city of Bayport.

Beattie is the child of David and Melody Beattie. The former was a counselor, and Melody was a writer with more than 15 published books. Nichole and her brother Shane were just young children when her parents got a divorce.

After the divorce, the screenwriter’s father started drinking and suffered from alcoholism and later died of the consequences. Melody as a single mom started to raise Nichole and her brother.

She, though, dropped out before graduation. In an interview, the Minnesota native said while she didn’t have a college education for her writing career, she had a strong point of view.

Growing up in Bayport with her divorced and single mom Melody and brother Shane, Beattie said family finances were a struggle until Melody’s career took off during Beattie’s late teens.

Nichole Beattie once said it was embarrassing for her to be on welfare because of her family’s financial condition. She had to be getting free school lunch and be a recipient of annual charity Christmas gifts from K-Mart’s “giving tree.”

Her mother had initially launched a writing career with the Stillwater Gazette, and Beattie remembered fearfully riding with her mom as she investigated an area murder. At the time Rappaport’s ex, Beattie had little interest in writing.

In 1986, Nichole’s mother, Melody published the self-help book “Co-Dependent No More,” through Hazelden which has since sold 3.5 million copies. Melody would later pen nine other books and become a TV writer in her own right.

After “Co-dependent,” the Beattie family status upgraded from a rental to a five-bedroom house in Bayport, took vacations and bought every gift for others on K-Mart’s aforementioned giving tree.

After her mother became a writer, life was good for Beattie and her family for about 18 months. Then Nichole’s then 14-year-old brother Shane died in a skiing accident at the Afton Alps ski area in 1991.

He was skiing in the Afton Alps when he had a collision with another skier. The results were devastating; Beattie’s brother suffered a cracked skull and a significant brain injury and didn’t make it. Nichole says the death of her brother left both her and her mother with a lifelong broken heart.

Beattie Once Was A Drug Addict

While studying at Arizona State University, Beattie out of her grief from her brother’s death indulged herself in drugs and flunk out after a year in college.

Apparently, the news of the death of her brother had hit her hard. The Stillwater-born writer started using drugs and dropped out of the university as a consequence.

It was Beattie’s favorite teacher (Oak-Land Junior High retiree Tom Rasmussen) who spurred her love of reading. Beattie’s writing career began at age 19 when she moved to New York and started writing short stories for magazines on a freelance basis.

The Walking Dead storyteller once revealed her writing was rather an escape from her inner pain that had emerged in her because of her brother’s death.

Beattie has often said the reason she started writing was her brother’s death.

“I was in so much pain it was the only thing I could do. If I didn’t write, I was going to kill myself,”

said the ex-partner of Michael Rapaport. One of her first stories published was about her “horrific bullying experience” in seventh grade at Oak-Land. At age 20 she landed a highly competitive job as an editorial assistant at Interview Magazine in spite of her lack of a degree, largely learning on the job.

Beattie Breakthrough As A Writer

After that, Rapaport’s ex-wife met writer/producer David Milch of “NYPD Blue” fame who hired her to write for the third season of the 2004-2006 HBO western series “Deadwood.”

Later, the mother of two also wrote for Milch’s one-season HBO series “John From Cincinnati.” After the 2007-2008 Writers Guild of America strike, Nichole spent four years on staff with the popular FX drama “Sons of Anarchy.”

Following that, she worked with Bromell on the 2010 AMC drama “Rubicon,” the 2011 NBC police drama “Prime Suspect” and with FX vampire horror series “The Strain.”

For Beattie, the offer from “showrunner” Glenn Mazzara to work on Season 3 of “The Walking Dead” came at the end of 2011. It was after a 15-month dry spell in which her mom helped her pay her rent. Since then she has gone on to write and serve as executive producer for the FX’s The Bad Executioner, NBC’s Law and Order: Organized Crime, and Apple TV’s For All Mankind.

Other parts of Beattie’s job have included scouting locations, approving wardrobe, hair, and makeup, and overseeing the action as well.

Beattie first met the True Romance actor Michael Rapaport in the late 1990s. Rapaport was coming out of a very controversial relationship with a fellow actress, Lili Taylor. Taylor had reported him to the authorities, and a judge issued a protection order against him.

Rapaport this ex-partner, Lili claimed the actor wouldn’t respect her boundaries after they broke up.

The Atypical alum kept calling her on the phone and harassing her. She also accused him of showing up in the middle of the night banging on her window.

As for Beattie and Rapaport’s relationship, the former couple dated for a few years before getting married in January 2000. The pair kept their wedding private. In the same year, Beattie and her ex-spouse had their first son Julian Ali Rapaport. Two years later in 2002, the writer and the actor had their second child, Maceo Shane Rapaport.

Both of her sons, Julian and Maceo have said that they are not going to follow in the footsteps of their famous parents and live a quiet and private life.

Two years after having their second child, in 2004, Beattie filed for divorce, and the official end of their marriage followed three years later, in 2007.

Who Is Beattie’s Current Husband/Boyfriend?

Since the divorce, there is very little information about Beattie’s dating life. On many occasions, the ex-additional crew of Rubicon has stated she prefers and enjoys a single life, and might not need a man in her life.

In addition to remaining shut about her personal life, her absence from social media is also one of the reasons behind the obscurity of her recent personal matters.

Her ex-spouse, Rapaport, on the other hand, is now married to Kebe Dunn.

Where Does Nichole Beattie Live Now?

Beattie is believed to be residing mostly in Stillwater as such in the past she had often said buying a vacation home in the city was something that was always on her bucket list.

She admits to being very fond of her hometown and missing it occasionally.

How Rich Is Nichole Beattie; What Is Her Net Worth?

While Nichole is known mostly as a writer, she also has a long list of credits as the TV shows executive producer. And considering her more than a decade-long career in the TV industry, there shouldn’t be the case where Beattie is still raking up paychecks in the lowest percentile; the executive producer must be among the top takers when it comes to salaries and perks.

After all, she has penned and overlooked behind the projects for some of the hit brands including the much talked about The Walking Dead, Law And Order, For All Mankind, and others. Though whether she is a millionaire or not is still up to debate and anonymity. In any case, in light of the aforesaid details, Nichole Beattie should have an estimated net worth within the scale of seven figures. In fact, some sources have gone on to say that she could be worth as much as $10 to $12million.

Speaking of wealth, it might be worth mentioning that her ex-husband, Michael Rapaport also has a net worth of nearly $10millin.

In May of 2012, five months after Beattie started working on The Walking Dead, she had to remove a 7-centimeter cancerous tumor from her left kidney.