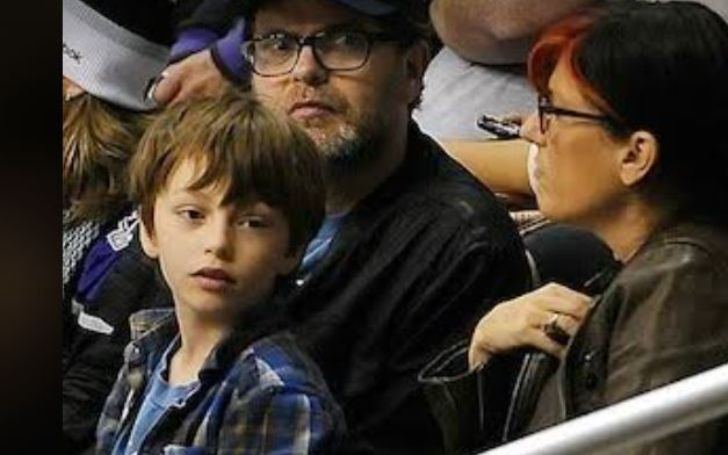 Walter Mckenzie Wilson is the son of The Office actor, Rainn Wilson and his wife of over 25 years, Holiday Reinhorn. Born a year before the launch of his father’s career-defining series, Walter is now in his late teens and is occasionally a star of the day featuring on his parents’ social profiles such as Instagram, Facebook, and Twitter.

Walter’s father is widely famous for playing a neurotic office worker, Dwight Schrute in the hit NBC series The Office along with Steve Carell and John Krasinski. Although there is a lot to tell about the actor Rainn Wilson, his son, who is getting slow yet genuine attention among the Office fans has hardly a narrative.

There, however, lies plenty of intriguing stories that specifically involve the only child of Rainn and Holiday. Read all of them in the details below.

Walter was born in Oct 2004 (age 17 years). His paternal grandmother, Shay Cooper was a yoga teacher and actress. His grandfather, also Rainn Wilson’s father, Robert G. Wilson (1941–2020) was a novelist, artist, and business consultant who wrote the science fiction novel Tentacles of Dawn.

Mckenzie’s maternal father, (Holiday’s dad) is a dentist who additionally was in the US marines. Walter’s grandmother, Mary Putka was a school instructor.

From his father’s side, Walter is of part Norwegian ancestry. The Wilson family are members of the Baháʼí Faith, a relatively new religion teaching the essential worth of all religions and the unity of all people.

His father, Rainn states Walter has an open heart, a ridiculous sense of humor, and an ability to always be curious in addition to making every moment an inspirational adventure.

The actor describes his son’s persona as a singer and dancer, but an unprompted one on any occasion.

Walter’s mother Holiday Reinhorn is a professional writer. The Portland, Oregon native, due to her father’s profession in the army, lived most part of her young life in Asia. She and her parents resided in countries like Philipines, Thailand, Japan, and Hongkong.

She attended a College in Seatle before shifting to the University of Wahington to study acting. The wife of the NYU graduate started off her career as a stage actress and performed in theatre productions. Holiday later would focus more to write fiction.

Reinhorn took part in a workshop for writers at the University of Iowa. Additionally, Walter’s mother, Holiday graduated with a Masters of Arts degree in Creative Writing from the same institution.

Walter’s mother divides her time between writing short stories and scripting. She has written for short films like PUSH.

What’s more, Reinhorn is also a Carl Djerassi Fiction Fellowship receiver from the University of Wisconsin.

She additionally has contributed many stories to the magazines like Tin House, Ploughshares, Gulf Coast, and many more.

Walter Mckenzie Wilson Parents Are Together Since College

Walter McKenzie’s parents, Rainn and Holiday met in an acting class at the University of Washington in the mid-80s.

Sometime after their first encounter, they began their relationship and eventually tied the knot on June 30, 1995, on Washington’s Kamala River.

They Were Poor At The Start Of Their Relationship

Rainn, in his autobiography, says he spent a lot of time remembering his first meeting with Holiday before finding the courage to look it up on the white pages.

“I don’t believe in love at first sight – it just doesn’t make sense – but that’s exactly what happened to me that night,”

Walter’s actor-father writes in his 2015 memoir, The Bassoon King: My Life in the Art, belief, and idiocy.

He also narrates how his wife and he were crazy, artistic bohemians in NYC when they first met in the 90s.  The writer/actor remembers them surviving for years with pizza, falafel, beef with broccoli, and scrambled eggs. Rainn reports he and his partner at the beginning lived above the poverty line – played theater and written strange things.

They used to go for walks with their pit bull, read books, saw experimental plays, listen to Wilco, and stay up until two o’clock every night.

Rainn admits due to his and his wife’s relatively old age, they struggled to have a baby of their own.

The actor in his book says it took him and his wife over a year to show the positive sign of pregnancy. The Seattle-native was thirty-eight while Holiday was forty.

The Dwight Schrute actor had just finished The Office pilot after which he learned about his wife’s pregnancy. The pregnancy for a while went incredibly smoothly.

Then, just two days before the Big Cats writer’s due date, Rainn reveals a bunch of really weird blood clot thingies that started periodically coming out of her vagina.

They went to the hospital but the examiners sent them home assuring them it was normal. The same night at three, the Washington-born actor discloses his wife started to pee blood again; only this time it was massive. He took her to the tub shortly after which the Portland native lost her consciousness. By the time help arrived there were blood and amniotic fluid all around Walter’s mother.

They Delivered Him In Not So Ideal Condition

They soon escorted her to one of the seediest hospitals of the San Fernando Valley at three in the morning. The emergency room was full apparently, so the paramedics parked Holiday somewhere and left in a hallway.

Rainn mentions he wasn’t even finding the pulse of his then-unborn baby in addition to nurses turning out to be of little to no help. The actor declares the birth process of his son, Walter was the most scariest and harrowing experience he has ever faced in his life.

Walter with his parents resides in their 1974 Spanish-style hacienda home in Southern California, per People.

Was Walter Mckenzie Wilson In The Office?

Unlike his co-star, Jenna Fischer’s baby, Rainn’s son with Reinhorn didn’t make it to the NBC series. There’s also a lot of speculations and hearsay stating Walter has already acted in several films. However, there hasn’t been any credible mentioning of such stories.

It, henceforth, is only a matter of time, before the senior Wilson’s fans get to know what his son is really interested in.