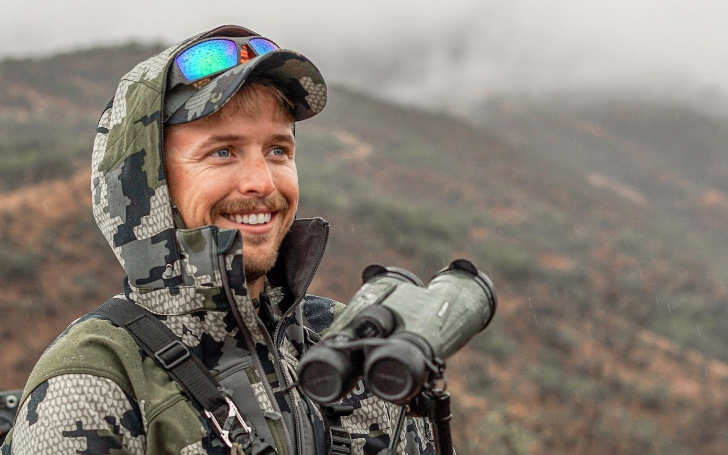 Robert Terkla is a former US army who fought in the Iraq and Afghanistan wars. Robert, however, rose to prominence for other than his military work, for being a YouTuber. Terkla abandoned his military career in 2014 following his medical discouragement and shortly after that, he started a YouTube channel, Lunkerstv which has more than 2 million subscribers in 2022.

Robert primarily features makes videos showcasing his outdoor sports that including fishing, hunting, and more. He appears joyful in all of his videos and Rob is quite satisfied with his ongoing YouTube career. However, on the other hand, he hasn’t been in a similar space when it comes to his relationships. It is a well-known fact that he has been married and divorced.

But what about his current relationship? Is he dating any girlfriend in 2022? Let’s find out all the nitty-gritty of Robert Terkla’s personal life and relationships in the sections to follow.

Robert Terkla is a Texas Native – How Old is He?

He was born on September 26, 1989, in Fort Worth, Texas, the United States. Robert Terkla is 33 years old as of 2022. The Texas native is an American by nationality and he is of Caucasian ethnic background. Talking of his parents, Robert’s mother is Shelly Batula Scism but his father’s identity is not revealed as of yet. However, Rob once revealed that his parents got divorced when he was around 14.

Meanwhile, talking about his education, Robert studied at the US Army Sniper School in 2009. Further, he also studied at Airborne School and Air Assault School.

His Father Died Years Before of Cancer

Even though Terkla hasn’t been outspoken about his family, he has gushed about it in his books. Likewise, Terkla once mentioned that his father died of cancer in one of his books, however, he didn’t reveal much about his late father’s fight for his life.

Robert Terkla is a Divorced Man – Who was His Wife and How Did They Meet?

As we mentioned in the first section, Robert is a one-time divorcee. He was married to Sarah Terkla whom he met during his high school days. The pair started dating shortly after their meeting and in no time, the pair was head over heels.

Robert and Sarah were inseparable already when the former joined the US army in 2008. As part of the military, Robert needed to go to war-struck countries, however, the physical distance between them didn’t weaken their relationship.

After Robert’s return to the US, he proposed to his then-girlfriend on June 3, 2009, and the pair were engaged to be married. Shortly after their engagement, Robert was deployed in Iraq which again separated the former lovebirds for two more years.

After Terkla returned from his Iraq mission, he and his then-fiancee, Sarah got married in January 2011, in Fort Worth, Texas. After their marriage, the husband and wife continued their romance and led a happily married life for over seven years.

Who is Robert Terkla’s Ex-wife Sarah?

Well, there aren’t many details about Robert’s ex-spouse Sarah on the internet. But, looking at her LinkedIn, we came to know that Sarah is the owner and founder of Rose & Thorn Clothing. Besides, Sarah previously worked for the companies like American Heart Association, East Georgia Regional Medical Center, and American Stroke Association.

Their Separation and Divorce

After living as husband and wife for more than seven years, the pair started having conflicts between them. There are no exact details for what reason the former husband and wife had conflicts. They finalized their divorce in 2020.

Amid their divorce, Robert gushed about the former couple’s separation saying he and Sarah didn’t call it quits because of money or some other related things, rather it was their mutual decision. Meanwhile, Sarah also put her views saying,

“Robert had his problems and so did I in our marriage. Relationships take 100/100 And we stopped doing that for each other.”

“He just saw it first before I did…”

Has a Daughter with His Ex-Wife

Terkla and Sarah remained together for more than a decade and they were married for around eight years before they separated. During their years-long relationship, they welcomed a daughter, Avery Terkla, however, the doting parents haven’t revealed her birthday yet.

We can Robert spend quality time with his daughter on his social media posts. He has posted a number of photos with his little girl.

Robert’s Love Life After His Divorce – Is He Dating Anyone Currently?

Not long after his divorce from his first wife, Sarah, Robert found a new woman in his life. And the woman is none other than his current fiancee, Cami Mantilla. The couple hasn’t shared much about their relationship in the media, however, the couple announced their engagement in March 2022 via Instagram.

In the photo Cami shared, we can see a big diamond ring sparkling on her finger as she held her newly engaged fiance’s hand. “Still absolutely speechless that this happened yesterday! Thank you for making me the happiest woman on the planet. I can’t wait to marry you,” wrote Cami in the caption.

As per her caption, we can say Robert and she got engaged on March 28th and they are planning to tie the knot soon. Besides, back in May 2022, Robert shared a couple of photos with his fiancee on his Instagram where he wrote he is going to tie the knot in a few months.

He is a Renowned YouTuber – All about His Social Media Career

Robert Terkla is a renowned YouTuber as of 2022. He started his YouTube career in 2015 by creating a channel named ‘Lunkers TV.’ Coming to the year 2022, Robert has already amassed more than 2 million subscribers on his channel.

He mostly features his adventures and outdoor activities in his videos which have been liked by millions of viewers over the years. Some of his most common activities on YouTube are hunting and fishing. By far, he has posted more than a thousand videos and has amassed more than 350 million views altogether.

Likewise, one of his most-viewed YouTube videos is “The First Time I Killed Someone” which has boasted around 6.5 million views so far.

Besides running a YouTube channel, Rob is also a host of a couple of podcast shows named ‘Googan Squad’ and ‘Speak The Truth’. Like his YouTube videos, Rob mostly talks about fishing and hunting in his podcasts as well.

Is a Former US Army Veteran

Before Terkla started his career on YouTube, Robert was in the US Army. He joined the US Army as an 11 Bravo in January 2008. Subsequently, Terkla was deployed to Kirkuk, Iraq. After his return to the States, Robert trained to be a sniper.

Later on, Rob was deployed to Afghanistan where he served for two years before returning back to his nation. After around six years in the military service, Robert had to quit his career due to his health issues. He left the US Army in 2014 and then started to pursue a career as a YouTuber where he got to explore his hobby of wildlife hunting.

Robert Terkla Career as an Author

Apart from being an ex-Army and a YouTuber, Robert is an author as well. Rob has already published a couple of books so far; his first book was “Never Fear Anything: My Untold Story as a Sniper in Our Nations Longest War.” The book came out on September 10, 2018.

He talks about his journey as a sniper in Afghanistan where he had to operate covertly behind enemy lines.

Robert Terkla has earned a decent amount of money from his career. If the sources are to be believed, he has a net worth of $2 million. He has been earning well from his YouTube channel for the last few years. Besides, he also raked a good sum of money from his time in the US Army.