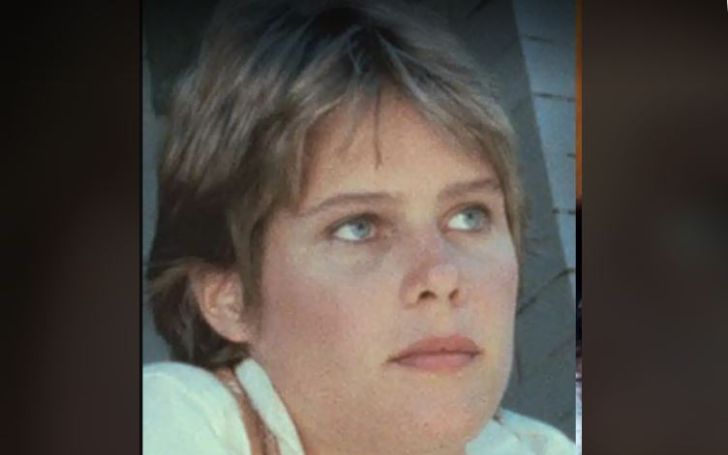 Sarah Holcomb is among the celebrities who had one of the short-lived careers in Hollywood. Holcomb was known for films like National Lampoon’s Animal House and Caddyshack. However, after the 1990 sports comedy film Caddyshack, she completely dived into nothingness totally drifting away from the limelight.

Many claims she started to vanish from show business after involving herself in alcohol and drugs. Verbal evidence widely suggests she also suffered from mental illness.

Read details recounting her descent through alcohol, drugs, sexual abuse, mental illness, and ultimately oblivion. Divulge into the discussion whether her derailment was the outcome of the 70s and 80s pop culture surrounding or something else was to blame. Also, know where is she now and who is she married to.

Sarah Holcomb Is From Connecticut

The Animal House actress Sarah Holcomb was born on Sep 11, 1958, in Weston Connecticut. The internet or the people from Hollywood has nothing much to say with respect to her early life. Not a great deal is in the records that could have explained her prior life.

Although she was born in Connecticut, some random sayings state her parents also had a house in San Miguel Allende, Mexico. Her mother reportedly was an artist but there isn’t much to say about her father.

She has one brother named David Holcomb, who is also an actor. He is married to Julie Nathanson and shares one child with his wife.

She supposedly studied at Weston High School, in Connecticut. A quantity of people has also come out with a claim that she went to some high school with the initials, AHS, in Mexico City, Mexico. According to some public forums, Sarah was a freshman there in 1974.

Holcomb started her acting career in her late teens. She initially appeared in several TV commercials including an ad video for Big Yank Jeans.

It however wasn’t until 1978 that she stepped into wider recognition. It was through her role as Clorette DePasto in a low-budget comedy that turned into one of the biggest blockbusters of the year, National Lampoon’s Animal House. That year she initially was set to star in then one of the most anticipated movies, Jaws 2.

However, since the movie went through so much rewriting, the film also went on to cut Holcomb’s part among many other newcomers.

In the National Lampoon’s Animal House, while Holcomb plays 13 years old Clorette, the actress, in reality, was then 19.

In the aftermath of Animal House’s success, it looked like Holcomb was soon going to get busy with a number of movie roles. And she did appear in a few or two projects. Following Animal House, she was on the 1979 film, Walk Proud, the comedy mockumentary Mr. Mike Mondo Video, and the 1980 comedy Happy Birthday Gemini.

Also, Read: How Much Is Blake Bortles Net Worth? His Salary & Career Details

Her last ever screen appearance would be in the 1980 film, Caddyshack by the makers of Animal House. In the film, she played the role of Maggie, an Irish Caddy.

Although not part of it in any official way, Holcomb, as like it or not, would become the key inspiration behind a 2004 movie, Stateside. The film follows the love between a young US marine and a hopeful actress and singer (performed by Rachel Leigh Cook) who later struggles with schizophrenia.

The Party Life Of Hollywood Started To Ruin Sarah’s Career

The fallout of her career as an actress, so the story goes, started in the wake of her personal problems including struggles with drugs and mental illness.

Her problems themselves were the result of her hard-partying environment which she had found after her first big break in Hollywood with Animal House.

What Happened To Sarah Holcomb After Her Last Film Caddyshack

As mentioned Caddyshack is the last on-screen appearance of Holcomb. The Walk Proud actress after that didn’t appear in any magazine pieces let alone a movie or series until her former coworker from Animal House, Chris Miller talked about her in 2006.

Miller was talking with Mr. Skin, a web magazine that specifically discussed film nudity when he revealed how Holcomb fell into the bad company and developed an addiction to drugs.

[Holcomb] was young, younger than the rest of us. We were a fast crowd. Drugs were everywhere. She fell into what, for lack of a better term, you would have to call the bad company. And got f***ed up on drugs. Coke, primarily, if memory serves. This was not unusual at the time.

said the author and screenwriter, Miller.

According to Miller, Sarah wasn’t the only one from that circle of people who got into addiction and bad track. Kenney, the writer, and producer of Caddyshack died in Aug 1980 after falling from a cliff. Though the doctors ruled it an accident, many believe it was suicide. The film’s lead cast John Belushi also lost his life from multiple drug intoxication in March 1982.

Fortunately, however, Sarah met no such fate as her ex-costars but her afterward life still turned bitter. The screenwriter Miller said that Holcomb ended up in some rehabilitation facility and admitted to knowing nothing of her since then. He though said hers was a sad story. Some past verbal accounts say, the Connecticut-born actress, following her unofficial goodbye to the films, did spend some time in a psychiatric hospital. This was particularly after she was diagnosed with schizophrenia.

The following year of Miller’s interview, a blog post appeared in 2007 wherein a little more albeit minor detail was known about Holcomb.

The piece was from Connecticut Blogger author, Bobby who proclaimed and explained to have met Sarah Holcomb in the Stanford train yard, Stamford, Connecticut. But this was back in 1989 or somewhere around.

Bobby writes at the time, Sarah looked like she was in her mid-20s and was heading to Westport, Connecticut. This person also claims after exchanging a few words with Holcomb, she told him,

Acting jobs are hard to come by, and I’ve been dealing with a lot of personal issues lately.

Holcomb reportedly also told Bobby that she didn’t reside in Westport but had relatives there.

Where Is Holcomb Now; Is She Married?

It has been widely agreed that Holcomb for years has been living a quiet, low-key life away from the glamor of Hollywood. She furthermore has supposedly taken an assumed name. And considering how her career panned out it’s understandable if the former actress does not wish to be around the media attention.

Some in 2014 nonetheless professed that Sarah had been living in Amherst, Massachusetts. However, the statement does lack substantiation.

At times, there has also been a lingering curiosity with respect to her marital whatevs. However, considering the ambiguity nothing has surfaced about her marriage either; or her current personal life for that matters. While bearing in mind that she’s been around for quite some years, it’s more than plausible that Holcomb has had several relationships in the past, whether or not she has a husband in the present is a big mystery similar to her whereabouts for the time being.

What’s pretty undisputable is the fact that Sarah Holcomb currently would be 64 years old.