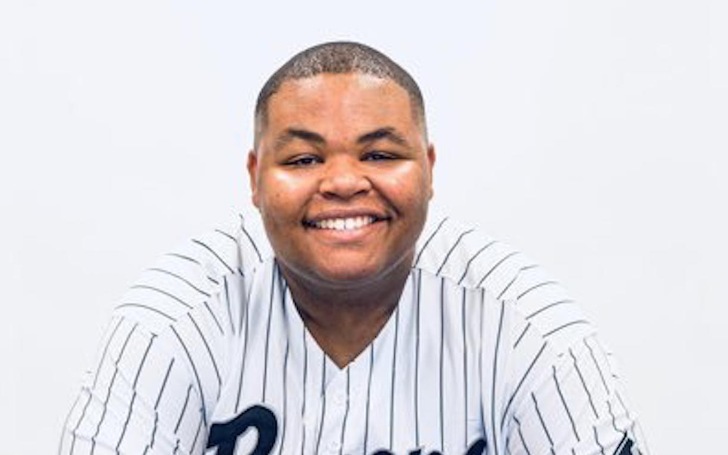 Alex Christian Jones is  an American actor who is best known for his role as Eddie Jones in 2011 American series Kickin’ It and Sekou Hamilton in Black Lightning 2017. Besides acting, he is also a game lover and is interested in singing too.
While he started off as a actor and singer, he shifted his profession to becoming a Digital Content Producer at WBRC FOX6 NEWS and currently works there as a news producer, as well. So, has he quit his career in acting? Well, apart from his career, his love life has also been a subject a interest. So, is he dating a girlfriend in 2022?
Today, we are here to adress all these queries about Kickin’ It fame actor, Alex Christian Jones along with his Age, professional career, relationship, net worth, and many more.

Alex was born on September 6, 1996, in Birmingham, Alabama, USA, under the birth sign, Virgo. As of 2022, Jones is 26 years of age. He grew up in his hometown alongside his little sister named Alexis Jones. He comes from African-American ancestry and is American as per his nationality.

From his early childhood, Alex was a stage performer and actor. In fact, at the age of 3, the Birmingham-born actor started performing skits on stage locally. Later at the age of 9, he started giving his performances in association with Birmingham’s Red Mountain Theatre Company.

Moving on to his education, he did a bachelor’s in Mass Communication/ Media studies from the University of Alabama, Birmingham (2014- 2018).

Alex Christian Jones Started As An Actor: His TV shows

As we said earlier, he started acting in his very early years. He first professionally started his career as an actor in the music video Flying Without Wings, a song by Ruben Studdard. His debut caught the attention of Disney XD which later granted him a role in a TV series named Disney 365 in 2006.

Similarly, he was cast in other TV series like Peper’s QUICK picks in 2010 and Kickin’ It in 2011. In fact, he rose to fame after he played the character of ‘Eddie Jones in the first and second seasons of Kickin’ It. In the series, he appeared alongside actors like Leo Howard, Olivia Holt, Jason Earles, Austin North & many others.

Later in the year 2017, Alex Christain Jones appeared in season 2 of an American Superhero fiction series Black Lightning, where he portrayed the role of Sekou Hamilton, a student at Garfield High.

Why Did Alex Jones Leave Kickin’ It? Know The Reason

In January 2013, Alex decided to leave the series, Kickin’ It which granted him the identity of an actor. Despite accumulating huge love from the audiences in seasons 1 and 2, he didn’t return back to play his part in season 3 as he had shifted to England after his announcement of departure from the show.

Actually, he was more occupied by his family issues and his education as well. In the meantime, his grandparents were ill and he took the responsibility to take care of his grandparents. Alex was busy with his personal life which overlapped with his acting career.

His Stage Performances And Interest

Alex has performed several roles on stage shows which include Beauty and the Beast, The Wizard of oz, Barnstormer, and Alice in Wonderland. Almost all the stage shows that he did in his acting career were in association with Red Mountain Theatre Company, Birmingham.

Further, the Kickin’ It actor is also interested in singing and video games. He is much active in the church’s activities and youth programs. His other interests include writing and Games.

Alex Christian Career At Present: He is A Content Producer

Alex is currently a Digital Content Producer at WBRC FOX6 NEWS, a Birmingham-based news channel. however, besides acting, he has done several jobs in his professional career. After he graduated from the University of Alabama, he worked as a college representative at his university for 3 months where he used to communicate to the students about SportManias App.

Further, in August 2017, he landed at WBRC FOX6 News as an intern. There, he worked as a scriptwriter for a newscast, and editor, and also served as an assistant to directors and producers. Moreover, he also worked as a General Manager of BlazeRadio in his professional career.

Accordingly, he joined WBRC FOX6 NEWS in September 2018 as a News Producer. Now in the year 2022, Alex is working as a news producer as well as Digital Content Producer for the same news channel.

Alex Christian Jones’ Personal Life: What Is His Relationship Status?

Despite being an actor and a media person, a WBRC FOX6 NEWS producer is incredibly a private person. He prefers to live a low-key life as his social media account is not approachable to know about his personal life. Moreover, when it comes to his relationship, the actor has remained quiet.

For now, all we can say is that the 26 years old Alex has been prioritizing his career more than any other things. But, who knows maybe, he is also in a romantic relationship which he may have kept out of the limelight. Anything can be possible, just that his relationship status at present cannot be said with certainty.

Moreover, he had also joined Twitter under the username @AChristianJones.

What Is Alex Jones’ Net Worth?

The popular Eddie character in the Disney series has a net worth of $1.5 million, as per sources. He accumulates a major portion of his income from his work as a producer in WBRC FOX6 NEWS. Moreover, he is also an actor who has acted in several TV series.

Who is Perdita Weeks? Her Marriage, Husband, Siblings, Movies

What Is Matthew Brown Doing Now? Everything You Should Know