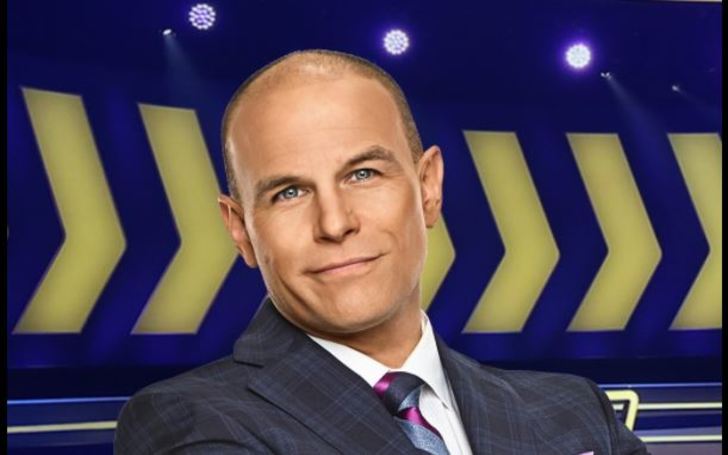 Dylan Lane is the host of GSN’s television game show, Chain Reaction. It is a game show that has players compete to form chains of words that make up a set of phrases.

People in the entertainment came to know about Dylan Lane when he started hosting Game Show Network’s Chain Reaction from 2006-07. He also gained wider recognition for hosting the National Vocabulary Championship.

Dylan left the hosting job for a significant amount of time but would return in the year 2021. And with the comeback, the questions with respect to his history, his departure, and even his personal life also got attention.

So, who is Dylan Lane? What is the depth of his life as a TV presenter and also when he is not on the camera? Decode the answers in the details below.

Dylan Lane Is A Native Of Huntingdon, Pennsylvania

Dylan Lane was born on July 18, 1977. Although his birthplace is Tyrone, he mostly grew up in Huntingdon, Pennsylvania. He is the son of Clyde and Donna Lane. He also has a sister, Emily (Lane) Elder, and extended family that still live in Huntingdon.

The occasional game show host graduated from Huntingdon Area High School in Huntingdon in 1995. During high school, he was actually into athletics but his parents convinced him to audition for a part in the school musical.

Further, his profile on Game Show Network reports Lane attended Muhlenberg College, majoring in Philosophy and studying Theatre. He also lived in Astoria, New York for a while. According to News 10, Dylan is now a Fort Johnson, N.Y. resident.

His father is a general contractor and has done a lot of house remodeling.

Dylan Lane Started His Career As a VJ

Lane started off his TV career first serving as a VJ and host on music-centric channel Fuse TV – having hosted The F-List and co-hosted Daily Download.

When a Fuse staff saw Lane talking to people on set, he hired him to be a VJ on Fuse. And that’s how Dylan says, he went into hosting. He, though, initially thought of acting as his main objective.

Lane was also on VH1’s Tool Academy (season 2)’s first episode. In this edition, he played the host in the Party King competition before the real competition started.

His Time In GSN’s Chain Reaction

It was during the mid-2000s that Dylan Lane would gain ground after becoming the host of Chain Reaction in the year 2006. Just a year later, however, Lane would leave the show to pursue his education and live a normal life.

During the years he hosted the game show Chain Reaction, Dylan also appeared as Justin Carter on The N series What Goes On. He additionally was the host of the National Vocabulary Championship, another production of GSN.

After quitting the host job, Dylan went to college to pursue a renewable energy engineer.

Since then, the host who is often mistaken for having cancer due to his baldness, worked various jobs in marketing before he decided to work in the wind turbine industry.

Lane went to a technical school to learn how to maintain wind turbines. He moved to Kansas where he worked on wind turbines before moving to New York after receiving a job offer with GE as a fleet performance engineer.

The Huntingdon High School graduate has been working as an engineer for General Electricity since Nov 2018 in Schenectady, NY, and has been assisting North and South America’s renewable energy sites.

He still works for the same corporation.

Lane would make a comeback as host of the popular GSN show, Chain Reaction fifteen years later in Feb 2021.

For the 2021 revival of Chain Reaction, he received a leave of absence from his workplace so that he could go to California and finish another season of the show.

When asked if he had come back for a long time, the engineer/tv personality responded,

“If there’s another season or two that’d be great, I’d love to host but he said he also loves to stay as an engineer.”

In Feb 2021, the network gave the green light to a new version of Chain Reaction. The word-association format originally aired during the 1980s. The second reboot came in 2006-07 and third in 2015-16.

He confessed he didn’t know he received the call with the Game Show Network wanting him to reprise his niche role as host of the game show.

“I have a couple of very good classmates from high school and I initially thought someone was playing a prank on me, to be honest with you,”

he described how his initial reactions were upon receiving the call.

The Pennsylvania native added he found it flattering that somebody would think of him but was also very skeptical wondering why the studio wanted to hire an old guy with less hair.

Dylan Was Also Into House Renovations

Lane once revealed, when he is not working, he’s into home renovation. He also does everything from electrical wiring to plumbing. In fact, he DIY-ed an old farmhouse into a 2-bedroom with a kitchen and 1 bathroom to 2 bathrooms and 3 bedrooms.

He, though, did it for his own family. Dylan even thought about flipping houses on HGTV and also consulted with his wife but she refused.

Dylan Lane is indeed married. When announcing the news of his comeback to Chain Reaction, he also mentioned how his wife gave him a blessing to return to his former job.

He at the time also said he and his spouse were in the potty training phase of parenthood. Lane and his wife, apparently, have two young daughters and they had been living in upstate New York.

How Did He Meet His Future Wife?

Lane and his wife each had friends who were going to get married to each other in New Orleans.

While his would-be wife was on the wedding guest list but he wasn’t. The former theater student, nonetheless, went to the ceremony anyway and kind of crashed the nuptials, admits, Lane himself.

He apparently knew the groom, yet didn’t make it to the list as they had run out of quotas. Lane met his wife on the dance floor; he was swinging around and it was his future wife who first approached him.

She commented on him and shortly afterward they started talking. They initially had a long-distance relationship for a couple of months. The father of two, however, hasn’t mentioned who his wife is or even her name.

A Perspective On Dylan Lane Net Worth

While it would clearly be an overstatement to say Lane’s richness is in the ballpark of famed game show hosts like Pat Sazak, Alex Trebek, Drew Carey, and such.

Each of the aforesaid names is veteran in hosting TV games and certainly has made a name for themselves, moneywise and also in terms of popularity.

Lane, on the other hand, who isn’t even a full-time host remained off the radar for more than a decade and instead lived a rather laid-back life. He likewise committed to a white-collar job and presumably didn’t strive for funneling himself materialistic fortunes in larger than average portions.

Accordingly, it would only be a surprise if in the future Dylan Lane happens to have a net worth tallying in the range of millions.