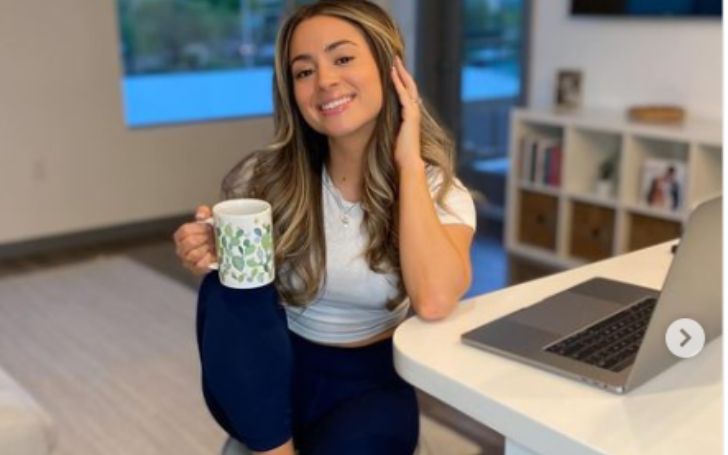 Talia Scott is a social media influencer, a Tiktok star, as well as a Youtuber. Besides, Scott also likes to call herself a singer and she came to more notice after she did a cover of the “Despacito” which has earned millions of views.

Scott is prominent for making dancing and singing content along with comedy videos on her social media platforms. Apart from her social media life, Talia is doing fantastic in her love life. She is a married woman with her supportive husband Roger Scott. Talia and Roger are together for a long time now and are happy in their wedding life. In addition, the lovebirds have an interesting story of their first meeting which we will reveal below.

So, scroll down below to discover all the unknown facts about the Tiktok star Talia Scott. Also, find out her age, nationality, family, wedding, and more.

The TikTok star Talia was born on April 14, 1991, making her age 31 years old as of 2022. She was born to her parents in Las Vegas, Nevada, USA, under the birth sign Aries. Furthermore, Talia Scott’s nationality is American and follows Christianity. As for her ethnic background, Scott is of Nicaraguan and Mexican ethnic descent.

Since she rose to fame in her later days, information about her family is fewer in the media. Her mother’s name is Cecilia Martinez and she has a younger sister Danisa Martinez. However, while going through her sister’s social media, we found a chance of her having more sisters. Yet, we aren’t sure of that as there is not any proof of the girls being her own siblings. Similarly, there is no information about her father as well.

To mention her academic qualifications, Talia is a graduate who attended Graceland University to complete her education. But like her family information, the details of her academics are also not revealed.

She reportedly studied at a local school in her hometown, Las Vegas for her primary education.

Talia Scott First Met Her Husband In a Club

The social media influencer was born with her family’s surname Martinez, but after marrying her husband Roger Scott, she adopted his last name and became Talia Scott. The couple are together for quite a long time now and are going strong in their relationship.

Talking about their first meeting, the duo met at a club when she was 25 years old and living with her cousin. She has explained her love story in the video “You Can Find Love in the Club.” According to the shorts on youtube, it was her cousin who wanted to go to the club but when she was all dressed up, her cousin said she changed her mind.

Even though Talia too wanted to stay at home, she had already invited some of her friends out to meet, so she left alone. There she met the love of her life, Roger, and find him very cute. The pair started chatting and her then-boyfriend then asked who her dream boy was. When she said she don’t know yet and asked the same question back, he started describing her features.

Though the two started flirting and joking casually, they also felt some connection right then. That is why Mr. and Mrs, Scott started dating just after their first meeting. From that moment, the husband and wife are together and happy in their love life.

Who Is Talia Scott’s Husband?

As we mentioned above, the 31-year-old’s husband’s name is Roger Scott. Her husband is also a media personality just like her. He is a youtube star and uploads videos alongside his wife on their social media platforms.

When Did Talia Scott and Her Hubby Roger Scott Marry? Their Wedding

Well, the lovebirds walked down the aisle on May 19, 2021, in an outdoor wedding ceremony. The one-time girlfriend and boyfriend sensed the spark between them on their very first encounter. They then decided to meet often and formed a beautiful relationship. After dating for a couple of years, Roger proposed to the love of his life with a gorgeous diamond ring on a beach.

The entire video was shot and uploaded with the title “WE’RE ENGAGED.” Talia on her fourth engagement anniversary posted some pictures of her with her boyfriend turned husband on her Instagram. She wrote a caption showing her appreciation towards Roger.

“I’M FREAKING OUT😭💍 Rog surprised me with my absolute dream ring in the same spot he proposed to me four years ago, but this time it was just us & sooo beyond special🤍 thank you so much my love, I am forever grateful for you and our love!”

Her caption depicted how grateful she is to have her partner in her life and how much she loves him. Looking at the growing love between the couple, we can say they are going a long way in their wedding together.

Her Career Highlights: Is Talia Scott a Dancer?

Talia Scott is a social media star who is prominent for her dancing and singing videos. Even though she is not popular as a professional singer, she has an amazing voice and does cover songs which she posts on her youtube channel.

Also, her cover of the “Despacito” has earned millions of views. In fact, she released her own original song, “Feel That,” in April 2017 and “Mama” after a year, via her youtube channel.

Likewise, she is also a good dancer and gets lots of appreciation for her dancing videos as well. Talia is often seen with her husband in her videos dancing together. They both set a great mood for all those who love to dance with their unique and fun-loving styles.

Coming this far with us, you may have already known Talia Scott is the social media sensation these days. Therefore, it is obvious for her to be active on most of her social media handles.

Talia Scott is an all-time active user of Instagram with 1.7 million followers and 902 posts. Similarly, she has a personal youtube account by her name Talia Scott with 164K subscribers on it and a Tiktok account at taliascott with 85.5K followers.

On the other hand, she is more active on the combined accounts on social media with her hubby these days. Talia and Roger together handle the youtube channel under the name “The Scott Family,” which has 722K subscribers. Furthermore, the couple also mostly appears on their Tiktok account at _thescottfamily with 4.8M followers and 147.4M likes on overall videos.

How Much Is Talia Scott Worth?

The social media star is flourishing in her career each day. She is creating content for all her social media handles with the helpf of her husband and making a good life out of it.

As of now, Tiktoker Talia Scott has a good net worth of over $1.5 million. She has made her worth through her videos, content, and cover songs. In addition, she is also allegedly a fitness and health expert.

Having millions of fans and followers, she may have also been approached by various brands. However, she has still not opened up about it.

What Is The Height of Talia Scott?

Scott stands at a height of feet and 5 inches tall. She is a social personality who looks fit and attractive and maintains a beautiful body. She has a black set of eyes and gorgeous light brown hair.