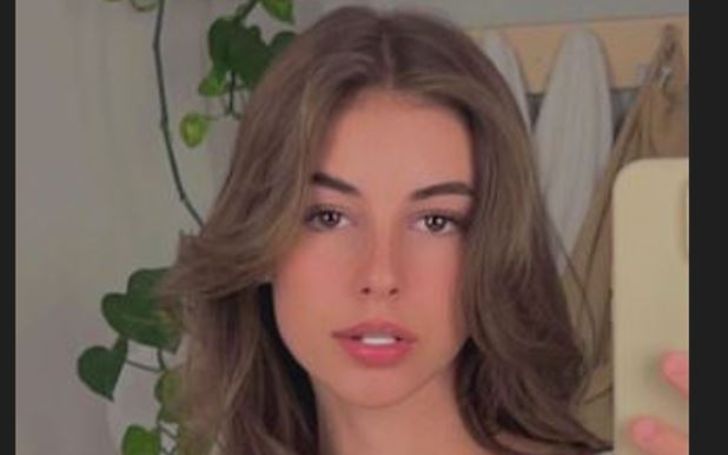 Eva Cudmore is a Canadian TikToker and Instagram influencer/model. The girl who became popular for her dances and POV trends often stands out for posting lip sync videos on her TikTok. Cudmore further is also an ex-member of a content creator group called Just A House (launched in 2021). Before that, she was also a member of Not A Content House.

Eva additionally was also one of the content makers in one more creator group called Top Talent House. Cudmore likewise is popular on social media platforms including Instagram; the honey brown-haired internet personality has hundreds of thousands of followers on the image-sharing platform. She though is more renowned on TikTok with over 100 million likes and millions of followers.

While she is mostly celebrated for lip-syncing and dance content, many of her videos also cover cosplays and anime. Read what else there is to know about Eva Cudmore; know about her early life, her parents, how she got into creating TikToks, her boyfriend, and further.

Eva Cudmore Parents; Her Mother Is A Lawyer

Cudmore’s mother is from England and the Instagram model has been to the country several times. In fact, Eva also has a good amount of British followers. Her mother is a lawyer. Some reports claim her mother is also a tutor.

Cudmore’s father, on the other hand, allegedly is an editor for a local newspaper.

Eva Cudmore Was Born In The Middle East

The 19-year-old Gen Z TikToker Eva Cudmore was born on Feb 26 in 2003. Although she is Canadian, Cudmore’s parents had her in Abu Dhabi. During her birth, both of her parents were working in UAE. In fact, her younger sister, Beth was also born in Abu Dhabi.

After her birth, Cudmore remained in the middle east until she was 18 months old after which she and her parents moved to Dubai.

In fact, for some part of her early life, Eva studied at American International School in Abu Dhabi before her parents moved her to Canada. She later attended secondary school in her hometown in Ontario, Canada.

How Eva Became Famous On The Internet?

While she became popular via modern social media platforms, Cudmore was never regular with the uploads in the initial years. It was her younger sister who convinced her to join the online community full-time.

Cudmore had an interest in acting and dancing from a young age and it was only a matter of time before she would step on TikTok first posting lip sync and dance videos.

In the beginning, Eva would do lip syncs to scenes from popular teen movies like Mean Girls. Cudmore’s popularity soared with her allegiance to TikToker groups called Not A Content House and Top Talent House. For this, Eva moved to Los Angeles in Oct 2020.

She met the other girls from Not A Content House when they were all in the same management company, Town Management.

The aforesaid houses, however, would dissolve by late 2020 after which Eva would join another TikTok collective, Just A House. The all-girl content house was launched in Feb 2021. During her time in TikTok houses, Eva would develop quite a friendship with a fellow content creator, Anna Shumate, who has over 12 million and counting people following her on Tiktok.

Though Just A House would also last no longer and as for now, it is unclear if Cudmore is affiliated with any other houses.

In the meantime, thanks to her popularity Eva has also been able to spawn her own merchandise like T-shirts, posters, stickers, and others.

She once also collaborated with an online shop Evry Jewels. Cudmore also occasionally makes thirst trap contents. Cudmore now has over 3.6 million people following her on TikTok, a figure that she thought would never reach in a million years.

As mentioned Cudmore is also considerably popular on TikTok as well as on Instagram. The 19-year-old as of 2022 has over 3 and half million followers on TikTok and close to one million on Instagram. However, for all the traction she has gotten in the last few years, Cudmore has also experienced a few or two scares.

Eva in April 2022 when talking with TheSync Podcast said that she long stopped opening her Instagram dms because of how bad it has been to her.

Explaining further about it, Cudmore said

I stopped no like I Oh my god I’ve had some gruesome things of people saying like they want to do to me.

Cudmore in the interview also revealed that she has had stalkers too.

Eva Cudmore Relationship With Connor Tanner; Are They Still Dating?

Back in Feb 2021, Cudmore had a thing going on with her ex-boyfriend and fellow TikToker, Connor Tanner. The couple often collaborated on Tiktoks and shared pictures of them posing in one frame on each other’s social media handles.

Eva and Tanner however parted ways sometime in April 2021. The news of their separation emerged when Eva on Twitter wrote that she had just started time to work on herself. Sometime later, Cudmore announced the big news once again on her Twitter. Stating the breakup, Cudmore wrote,

hi loves, Connor and I are no longer together : (he’s an amazing guy and he’ll always be my person. we both just rlly have to take some time and work on ourselves. so much love for him.

As for now, it is unclear who Cudmore is dating or if she is all single for the time being.

Back in June 2021, Eva and her fellow content creator, Katie Pego and Sabrina Quesada entangled themselves in quite a drama.

The conflict among the three apparently was so high profile that their beef also made it to the official Instagram profile of their then-content house, Just A House.

Quite a shocker on June 23, 2021, the house’s bio had a sentence that said, “Eva Ruined The House.” A hoard of fans flooded with a query why there was drama between the fellow house members.

Eva addressing the situation said the house’s main handle had been hacked. This she said in her live stream which was shortly after the news of the feud.

At the same time, Quesada claimed Katie had been “a very toxic friend to her and to many other girls.” She then also mentioned Eva and revealed how Cudmore had said to her that she wasn’t going to talk to Katie but anyway complimented her on her Instagram live.

Shortly after all these, the house then manager, Devyn Walker announced the dissolution of Just A House. The real reason for the discontinuation of the TikTok collective, however, was never revealed.