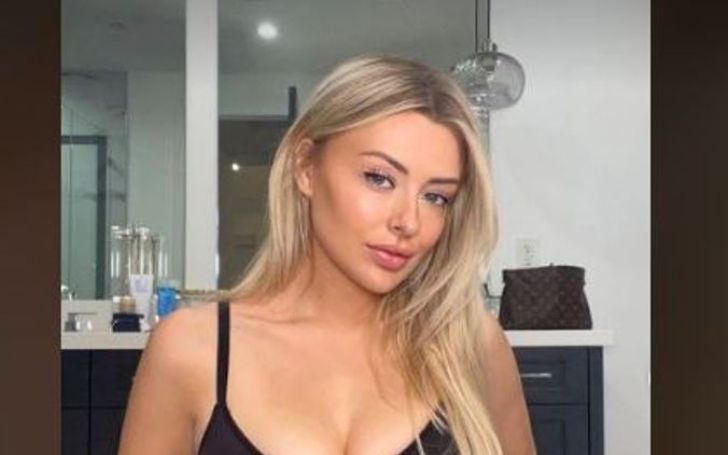 Corinna Kopf is an Instagram model, a Facebook game streamer, and YouTuber. Kopf was in one of the earliest vlogs of David Dobrik, one of the most celebrated YouTubers and bloggers. In fact, she has been a member of Dobrik’s vlog since 2015. People started noticing her when she first appeared in David Dobrik’s vlog in June 2015 in a video titled, I want thow to be friends with the Gabbie show!!?

Like many faces that appear in Dobrik’s Vlog, Kopf would also have her own following the more and more she appeared in the Slovakian-born American Youtube vlogs. She’s been in some 20 of Dobrik vlogs. Corinna is also famous on the internet as Pouty Girl and additionally is a model in Only Fans, a subscription platform known for its vast r-rated images, videos, and likewise subjects.

People also remember her for being the girlfriend of noteworthier YouTubers like Logan Paul, Turner Tenney, and Toddy Smith, among others.  Down below lies the uncut story behind Corinna’s relationships with all of the guys above. In addition, read a complete wiki on her; starting from her parents, to how she became a household name, her sudden rise to internet popularity, and even her surprising net worth.

Corinna Kopf was born on December 1, 1995, in Palatine Illinois. She apparently also spent some years of her childhood growing up in Wisconsin, Iowa, and Missouri.

Corinna’s father, Jayrod is a farm man who has also appeared in several of his daughter and her friends’ vlogs. Much like her father, Kopf’s mother, Trina has also shown up in her daughter’s videos.

Back in March 2022, Kopf made a Youtube video where she gifted her mother a Ferrari worth $50,000. Like her daughter, Corinna’s folks too have their own Youtube channel, titled, On the Road with Jayrod and Trina. The couple decided to launch their own vlogs after they quit both of their jobs in the wake of covid-19, 2020.

Corinna Kopf Worked At The Hooters Before Becoming Famous

Corinna used to work at the hooters before her popularity. When Corinna first moved to LA, she was a nanny making $400 a week. She used to look after the babies of three different families. In the initial years, she also lived on her friend’s couch.

Kopf credits David’s followers for her sudden rise in popularity.

Kopf Career As An Only Fans Model; The Story Behind Her Nudes Leak

Kopf launched her Only Fans in June 2021. As per Kopf’s Only Fans account, $25 per month is the basic fee for a subscription to access her 18+ content.

At the beginning of her Only Fans days, there were quite a number of criticism that alleged Kopf was simply charging money for the content she had already posted on her public Instagram.

Then in June 2021, Corinna herself stepped up and said,

Not every picture is going to be the crazy thing you’ve ever seen.

Kopf likewise added her Only Fans feeds were just extra content for her fans to enjoy and that they ought to take for what they are.

She said had she posted everything right out the gate all of the exclusiveness would have gotten leaked. She also told her Only Fans subscribers to just wait. Kopf at the time reasoned since some of her underage fans were leaking her nude content she was also being cautious by not sharing overtly implicit matters.

After the leakage of her nude content, she tweeted a post where she said she was making a long list of people who were responsible and reporting them. Earlier, Insider reported that there were some accounts that were retweeting Corinna’s nude matters at a discounted price.

Corinna Kopf Made Millions Within Days Of Becoming Only Fans Model

Since Only Fans has become a great avenue for Instagram models to boost their wealth, Corinna is no exception either. For numerous provocative content Kopf has aired across several platforms including Only Fans, the 1995-born has made a grand net worth.

Back in Aug 2021, Kopf made headlines when she admitted to making $4.2 million in a little over a month.

She revealed the figures whilst answering David Dobrik when the YouTuber was making just another of his TikTok videos. In the recording, Dobrik asks Kopf to share how much was she making from her Only Fans.

To that, Corinna replies,

It’s actually not as crazy as you think.

Shortly after, Kopf revises by saying

Earlier in one of Dobrik’s vlogs, Corinna said she made $1 million in the first 48 hours after joining Only Fans.

In David Dobrik‘s video, Corinna had told Dobrik her first ever semi-frontal nude from the waist above made $165,000. Dobrik posted the video back in July 2022.

Fans metrics once reported Kopf’s earnings stretched out within the domain of $2 to $3 million per month. Later the Illinois-born millennial came herself with the number very close to the aforesaid estimation. Back then Kopf had around 129,000 subscribers and about 65 posts.

She reportedly made a little over a million dollars within the first 48 hours of her Only Fans career and $3 million in the first week. Estimates projected from the time she started her Only Fans in June 2021 to Feb 2022, the Pouty Girl raked in close to $11 million.

To say more that was $1.2 million a month on average that Corinna was pulling in. The highest in a month that Kopf had earned being an Only Fans model was $2.4 million from June 2021. She had achieved the number in just a 30-day span.

In the meantime, she also has a deal with Facebook Gaming which she signed in 2019 after getting banned from her previous gaming platform Twitch. Her payoffs also led her to bag a premium house in Los Angeles back in 2020 which she showed to her YouTube subscribers through a vlog.

As per recent reports, Kopf now has an estimated net worth of over $10 million.

Corinna Kopf Relationship; All The Boyfriends She Dated Till Now

Over the years, Corinna has had several boyfriends ranging from fellow YouTubers to vloggers and gamers from a time when she hadn’t even gained ground. Many of the guys whom she dated also appeared in several of Dobrik’s vlogs.

Among many of her famous boyfriends, Kopf was first the girlfriend of Toddy Smith, another member of Dobrik’s Vlog squad.

However, this relationship was apparently complicated. Kopf once revealed she and Smith had initially started out as friends with benefits but things eventually didn’t work out for the two.

After Smith, Kopf would date a Twitch streamer, Adin Ross. This union, too, was a bitter one for Corinna with the model once admitting that she regretted dating Ross.

Following Ross, Corinna started dating another fellow streamer Tfue or Turner Tenney, one of the members of the popular streaming group, FaZe Clan.

The media started noticing them as a couple in Dec 2018. Corinna and Tenney however didn’t confirm that they were dating until March 2019. They put out their relationship in the open by posting a picture of a couple on their respective social media handles.

However, by June 2019, the couple started experiencing rifts and by Feb 2020 Corinna and Tenney had already separated. Tenney or Tfue and the blonde model had reconciled in between before ending up things once again in late summer 2019.

Several times, Tfue and Corinna were on and off as a couple with their first break-up happening in late summer 2019. After that, they patched things up once again but ultimately called it quits for once and all in early 2020.

Corinna Was Also The Girlfriend Of Logan Paul

They first appeared publicly in 2019 at a basketball game with the pair wearing matching yellow sweatshirts. Kopf initiated the contact after she approached the now WWE fighter on his Twitter dm.

During an interview whilst talking about her relationship with Paul, Kopf said she initially despised him for his Japan’s Aokigahara forest controversy. It apparently felt personal to Corinna as her own brother had killed himself.

They later talked it out and patched up the differences. Speaking of relationships, it was reported that Kopf once also took her roommate’s virginity though for a while it was unclear who this roommate of Corinna was. And if the millionaire model ever had a serious relationship with him.

Then when doing a podcast with Paul, Kopf admitted the guy too was a streamer and he apparently still lives with her.

Did She Also Date David Dobrik?

During an interview with Impaulsive in 2021, Kopf admitted while she was attracted to Dobrik and vice versa, they never got intimate. In 2020 she tweeted that she was dating David Dobrik.

They also often kissed each other in vlogs. Kopf, at one point, also tattooed the words, David’s Vlogs on one of her fingers.

However, as per Dobrik’s family and friends, their relationship was more of a platonic type. Corinna during her interview with Playlist Live in 2019 said she first met Dobrik at a concert for the pop duo Jack and Jack. They both at the time used to live in Chicago.

The 18-plus model and the Youtuber with over 19 million subs later became roommates and some time afterward they both moved to Los Angeles.

In Oct 2021, there were headlines that claimed Corinna slept with TikTok star, Bryce Hall. However, Kopf, the Youtuber with close to 2 million subscribers later denied any such thing happened. In fact, they instead had a little social media feud in late 2021.