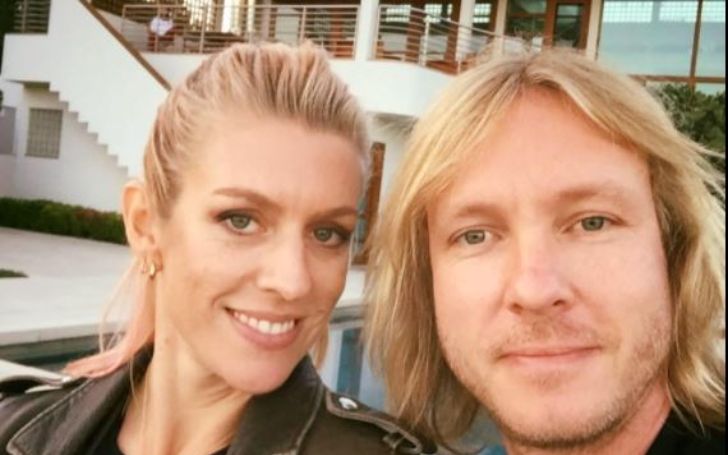 Hannah Gibson is a former actress and make-up artist turned hoop dancer. She is better known as the daughter of the Academy-winning director and actor, Mel Gibson and his ex-wife, Robyn Moore Gibson.

The daughter of the American-Irish actor is also often talked about for her marriage to Kenny Wayne Shepherd, a guitarist, singer, and songwriter who has released several studio albums and experienced significant commercial success as a blues artist.

Hannah is the first part of Gibson’s large and extended family. The Braveheart star, Mel Gibson has often stated his kids are the reason he works so hard.

Know what the first child of the Lethal Weapon star Hannah Gibson is doing in the present. Also, read about her life as the celebrity kid of one of the most recognizable faces in the movie industry. Further, get extended details in regard to her marital life and her family.

Hannah, the eldest child of the Golden Globe-winning actor, Mel Gibson, and his first wife, Robyn Moore was born in Nov 1980.

The now 41-year-old, Hannah is the oldest of Mel Gibson’s seven kids with his wife, Robyn, and their only daughter. Her famous actor father is from a large Catholic family of 10 brothers and sisters. He additionally describes himself as “an old-fashioned Catholic.”

Paternally, Hannah, the former student of Malibu High School is of Irish descent. Her actor-father is the sixth of 11 children, and the second son of Hutton Gibson, a writer, and Irish-born Anne Patricia (née Reilly, died 1990).

What Is Hannah Gibson Doing In The Present; Has She Been In Any Movies?

Like her father, Hannah has also worked in the film industry, albeit formerly as a makeup artist in the 2000 rom-com film, What Women Want and as a production assistant for the 2000 war drama, The Patriot. Her only credit as an actor was as Arja in the 2014 mini-series, Toisen Kanssa.

The Catholic film star once described his daughter as “adventurous” and well-traveled. As of recent, Mel and Robyn’s first child, who also goes by the name, Hannah Mae Brobst, is more into Hoola hoop body movement.

She often shares her dance moves performed with the hoops over her Facebook, Instagram, Tiktoks, and Twitter. It, however, is a bit unclear if hoops are what she does for a living.

At the time of their wedding, Hannah was 26 while Shepherd was 29. Mel watched his daughter becoming the wife of Kenny in his own personal church. The Mad Max actor and the rest of his family also use the private chapel to conduct services every Sunday in Latin.

The building is situated on Mel’s £2million estate in Malibu, California. The bride’s family performed the traditional Catholic wedding ceremony entirely in Latin. After the ceremony, the couple left the celebration in a jet black limousine.

Hannah, the only daughter of Gibson and his wife Robyn, married Shepherd after over two years of being engaged. Shepherd the native of Benton, LA, proposed to Gibson on New Year’s Eve 2004 in Rome.

As a music artist, her husband, Shepherd had his first platinum album while he was still in high school (1995’s Ledbetter Heights). He has also received two Grammy nods; first for his 1997’s Trouble and second for his 1999 album Live On.

Together, Hannah and Shepherd have five children: three daughters and two sons. The couple with their children live in Calabasas, California.

Hannah Gibson Once Decided To Become A Nun

A few years before marrying Wayne Shepherd, Hannah had thought of a whole different career. Back in Sep 2002, Californian-born spawned quite a surprise when she announced to become a Catholic nun.

On his daughter’s then decision, the Oscar winner at the time said he found it delightful of Hannah’s decision to join a religious order.

“I believe in God. My love of religion was given to me by my father,”

He additionally expressed happiness on his daughter’s then undertakings to become a nun. In the wake of the announcement, a number of Catholic websites, including Latin Mass News and Traditio, a site for traditional Roman Catholics, had reported Hannah’s interest in becoming a Bride of Christ as far back as February 2001.

Hannah’s father, Mel was then filming the movie Passion Of The Christ in Southern Italy.

She Has Six Siblings

Hannah’s parents welcomed seven children including Hannah. Following Hannah, Gibson and Robyn welcomed two twin boys in 1982, whom they named Edward and Christian.  Presently, Edward is quite distant from the entertainment world and doesn’t share much about his life. He though reportedly is the owner of a furniture company Natural Edge, in Los Angeles.

As for Hannah’s other brother, Christian, he is also in the same line of profession as his father. He’s worked on Netflix’s Bird Box and Coyote. He further has been in his father’s film Hacksaw Ridge. He, however, mostly works as a camera operator.

After, Edward and Christian, Hannah’s parents, Mel and Robyn’s had their third son, William, in 1985.  Similar to Ed, William too is seemingly a low-key celebrity kid.

The hoop dancer’s other brother Louie Gibson was born in 1988. Louie is a writer, director who has also served as a producer for several TV shows and movies.  His IMDb states, the first feature film he wrote and edited was Happy Hunting in 2017.  Louie is also the director and writer of the 2022 movie Manifest West.

Likewise, her other brother is Milo, who also followed in his father’s footsteps and pursued acting. He made his acting debut in 2016 in his father’s war drama film, Hacksaw Ridge. Milo also appeared in the 2018 comedy Breaking & Exiting and the 2021 film Under The Stadium Lights.

Mel and his former partner, Robyn’s youngest and the last child, Thomas, was born in 1999.

In addition to the aforesaid names, the mother of five with a rock artist is also half-sibling to her father’s two more children, Lucia and Lars Gerard, each born from Mel’s relationship with a different woman.

Is Hannah As Rich As Her Father, Mel Gibson?

While Hannah might be the daughter of one of the richest actors in the world, the possibility of her own net worth being in the domain of hundreds of millions seems quite untangible.

The ex-makeup artist’s actor, director, and producer father, Mel Gibson has wealth, a little less than half a billion-dollar, and considering the massive figure, it might quite a while before the media starts talking about Hannah in the same realm of richness.

Also, given her otherwise unspecified profession, the specifics with regard to her net worth are anything but numbers denoted.