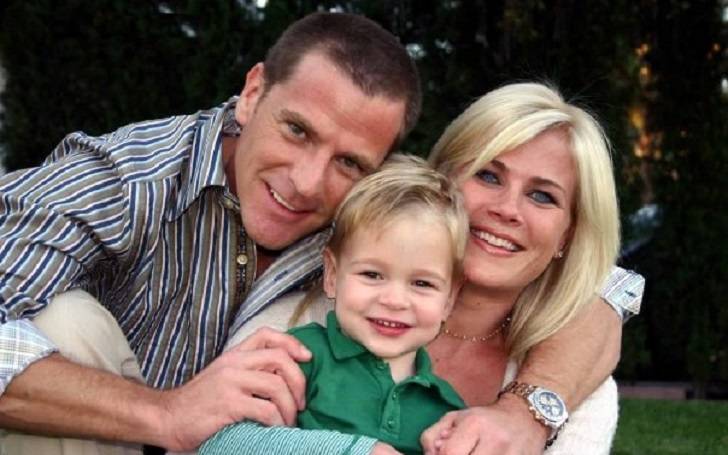 David Sanov is a former California Highway Patrolman by profession but rose to prominence after his marriage to actress Alison Sweeney. His wife is best known for her work on the NBC soap opera Days of Our Lives.

The long-lasting couple is blissfully married for over two decades and yet to show any signs of slowing down. David also shares two children with his wife. Furthermore, we will mention several other secrets to their enduring marriage in the following article.

In addition, take a look at many hidden facts about Alison Sweeney’s husband David Sanov!

David Sanov Was Born and Brought in Los Angeles

He was born on 4th October 1972, in Los Angeles, California. He spent most of his early life in LA along with his family.

Talking about his education, David, 48, attended the University of California, Irvine, and completed his graduation in 1994.

His nationality is American and has a Caucasian ethnicity.

What does David Sanov do for a living?

He previously worked as a highway patrol officer in California. He spent several years as a patrolman until his retirement.

But in the past several years, Sanov has kept his professional life behind closed doors.

David has a net worth of $500,000. He mainly collected his wealth from his work as a former highway patrol officer. On the other hand, his spouse has a $9 million net worth. She was paid a salary of $45,000 per episode as a host of The Biggest Loser.

David’s wedding with wife Alison Sweeney: What is the truth behind their long-lasting relationship?

The couple tied the knot on 8th July 2000. They exchanged their vows in a private wedding ceremony which was attended by family members.

It’s been nearly twenty years that David and Alison are married but their commitment and support to each other seem like it’s never been stronger. Therefore, many of their fans wonder what is the key to their successful marriage?

The answer to the question is the annual evaluation they do every year on their anniversary. She talked about the fact in an interview with Health magazine months ago their 15th anniversary. She explained the tabloid,

“Every year on our anniversary, we have a dinner date and talk about how our relationship is going.”

The actress opened up they also discussed three things they should/could work on,

“We kind of give each other a job evaluation, which sounds a little embarrassing! We talk about our three favorite things about the other person and then three things that we could work on.”

Alison every year celebrates the couple’s big day posting an adorable photo of themselves on her social media. On 8th July 2020, they commemorated their 20th anniversary with a glass of champagne. She captioned the photo,

“Dave and I are celebrating our 20th anniversary in our own backyard. Not quite how we’d planned it, but … that’s one of the best lessons we’ve learned over the last 20 years. Some of the best adventures come when plans get chucked out the window.”

First of all, both of their parents are life-long friends. David’s father and Alison’s mother used to play the violin together for feature film soundtracks. Due to the fact, the couple knew each other from an early age and Alison even had a crush on him from their childhood. Growing up together, their bond was too strong from the very first.

Dave later took a cop job in California while Alison embarked on show business. When both of them were busy in their professional career, Dave, one day, met Alison at a party. And it was when the Highway Patrolman asked her for a date.

David and his wife Alison welcomed their first child, a son Benjamin on February 25, 2005. The actress once told that her experience as a first-time-mom was awesome. She said,

“With Ben I got four weeks off. It was awesome for a first-time mom. I took advantage of every minute.”

Their second child, a daughter named Megan was born on January 12, 2009. The proud mom of two children, Sweeney reveals in an interview with Closer Weekly that one of the most beautiful moments of motherhood is “watching your kids flourish” and keeping eyes on them to find whether they are doing good or not.

The actress also revealed in the same interview their son Benjamin loves to play tennis. She explained,

“My son is super active with tennis and he loves it.”

The family of four resides in Los Angeles, California at present.

Back in 2011, Days Of Our Lives star revealed how she lost an impressive 30lbs in an interview with Daily Mail. The actress faced a lot of problems while acting in movies and TV shows due to her extra weight. But, Alison told when she joined The Biggest Loser in 2007, it played a major role to lose her weight in the following years. She was a host of the competition reality show and left the project at the end of its sixteenth season in 2015.

Although the actress struggled with her body for most of her life, she suggests her daughter “love yourself no matter what your situation is.”

Inside The Life of Lora Chaffins, Matt King’s Wife And Their Married Life

Who Is Sandy Corzine? Untold Facts About Sharon Case Ex-Husband