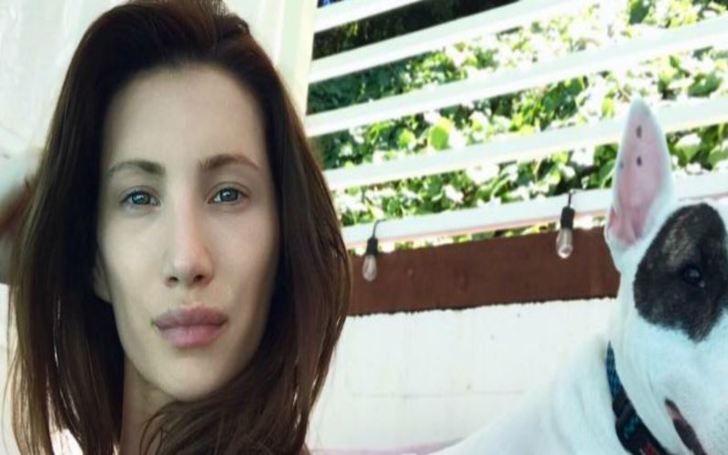 Sonni Pacheco is the former wife of MCU actor, Jeremy Renner. Pacheo’s ex-spouse is known for playing Clint Barton aka Hawkeye in the Marvel movies. Renner and Sonni were married for a total of ten months.

Individually, Pacheco is a model and an actress, now a full-time sculptor. She and her ex-husband entangled themselves in a bitter divorce despite being together for more than four years and having a daughter in between.

Their separation included no shortage of caustic remarks with Sonni Pacheco revealing some chilling things about the famous Marvel hero. In this article, know all about her relationship with Jeremy along with facts about her life prior to being the girlfriend and wife of a Hollywood star.

Sonni Pacheco Is A Former Model And A Real Estate Agent

Sonni Leigh Pacheco (Sonia Pacheco) was born in 1988 and grew outside of Vancouver, Canada, in Pitt Meadows. In her home country, she modeled for numerous brands, most notably for the very popular Jaide Clothing.

Initially, Sonni worked as a hairstylist. She lived in Mexico for a short period where she dabbled in real estate, selling timeshares for a Mexican resort at the age of 19. After that, she went to China, where she worked as a lingerie model.

The five-foot-eight model also worked as a realtor at KW Beverly Hills – M.E. PROPERTIES. In addition, she was a model/spokesperson for Monster Energy Drinks in early 2013.

Moreover, she has also had few film credits. The brunette has played in films like American Pie Presents: The Book of Love (2009) and The Wingman (2012).

She Presumably Is Of Spanish/Portuguese Origin

It’s a matter of wait and “if” to know, for sure, what exactly is the lineage of Ava’s mother, but, considering her name, stats suggest she very well could be of Portuguese and Spanish descent.

According to some historical documents, a Roman general called Vivio Pacieco, sent by Julius Caesar to fight in the Iberian peninsula is one of the first persons recorded with this surname. It to a significant extent translates to “Noble One.”

Pacheco is roughly 20 years Renner’s junior. The duo kept their relationship under the radar and was pretty good at it keeping so for a while.  They tied the knot in January 2014, 10 months after they had welcomed their daughter in March 2013. Jeremy though confirmed the union only in September – months after they actually exchanged vows.

Explaining why he kept his marriage a secret to Capitol File, The Wind River star said “I have tried to protect my family’s privacy, my wife’s privacy. I don’t need her to get hammered with my life.”

“Privacy issues are important because I want her to go about her day without being bothered.”

Reports at the time suggested the couple were secretly living in LA. Renner and Pacheco had met in Vancouver on the set of Mission: Impossible Ghost Protocol.

While they managed to keep their marriage low profile, they, however, couldn’t protect the privacy of their divorce.

Their split was anything but amicable. The former couple, Renner and Pacheco got embroiled in a confusing “he said, she said” war of words. They both pointed out some unconvincing facts about each other; from Renner stealing his baby mother’s passport to Sonni marrying the actor just for a green card.

Allegedly, the pair had first broken up even before the birth of their daughter but they had decided to reconcile after becoming parents.

Starting from their separation; several court documents surfaced where the MCU actor and the Canadian model each had their own story of what happened during their separation.

The sculptor said Jeremy was often under the influence of substances and at times threw verbal and emotional tantrums to her.

Renner’s former wife also asked for physical custody of their daughter, Ava Berlin, then 21 months. And yes the spousal support in addition to the use of their Range Rover and for Renner to pay for her moving expenses and rent.

Pacheco first filed for divorce from Renner in December 2014. After the separation, the majority of custody went to the American Pie actress with Renner ordered to pay child support and other expenses.

Later Ava’s mother claimed her baby father was nearly $50,000 behind on paying child support. Then in April 2015, both Renner and Sonni agreed to joint custody of their daughter.

The fiasco didn’t just end there. Renner and Pacheco’s ensuing court encounters kept on presenting more and more accusations from both sides. Some of them include Sonni claiming The Hurt Locker stealing her passport, her birth certificate, and social security card.

Did Jeremy Renner bit his daughter? Sonni claims so

The Canadian artist also accused the actor of biting their daughter and leaving a bruise on her shoulder. Pacheco said she spotted the mark on their then-6-year-old in April 2017 and that the girl told her, “Daddy bit me.”

As per the documents, Ava said, “It’s OK Mommy, it was an accident. I told him to never do it again.”

The filing further stated Ava explaining the bite happened when [Renner] was being mean and yelling. Renner, however, denied that the bruise came from him, saying Ava’s seat belt “pinched” her.

Worth mentioning is the fact that in 2018, there were headlines where Pacheco alleged how at one point, Renner shoved a gun in his mouth and threatened to kill himself. He, however, fired the shot up in the ceiling’.

Furthermore, documents said their nanny claiming Renner once left cocaine on a bathroom counter that was within reach of Ava. Sonni stressed in one instance, their nanny overheard Jeremy say he was going to Sonni’s house to kill her and then kill himself, because “it was better, that, Ava had no parents than to have [Sonni] as a mother.”

May 2020 court records showed Renner claiming Pacheco had transferred nearly $50,000 from their then 7-year-old daughter Ava’s trust fund into her own bank account over a two-year period. Jeremy also accused his former spouse of transferring an additional $10,000.

Ava’s mother admitted to Renner’s business manager on April 29, 2019, that she indeed transferred the money from the minor’s trust account to her personal account. She, though, reasoned the money transferred to her bank were to keep her afloat/provide her daughter with Christmas presents/birthday gift bags and essentials for her bday party.

The Canadian artist said she needed extra funds to retain legal support, undergo a child custody evaluation, and have a planned parent coordinator. Pacheco, hence, ruled, “This is NOT cheap.”

In a response to all the accusations thrown by Sonni, Jeremy’s rep told the claims were “categorically not true and another straight-out character assassination made by Ms. Pacheco and her attorney.”

The actor’s team explained the well-being of his daughter Ava has always been and continues to be the primary focus for him. They stressed how the dramatizations made in Sonni’s declaration were a one-sided account made with a specific goal in mind.

In March 2020, Pacheco’s former husband, Jeremy filed court papers requesting to lower his child support payments. This was despite the fact that the actor then had a net worth of around $50 million and has continuously appeared in the blockbuster franchise including Marvel’s Avengers, Mission Impossible, and The Bourne Legacy.

Worth mentioning is the fact that in 2018, Renner’s Marvel salary made him an “extraordinary high-income earner” with an $11.4 million income.

Renner reportedly told the court he was expecting to have a big impact on his income amid the 2020 virus outbreak.

What Is Sonni Pacheco doing nowadays?

Renner’s ex now is an artist specializing in figurines. She has often shown off several of her clay and other statuettes on Instagram. Her pieces mostly include nude female forms.

The former model describes her artwork as her way of exploring “the visceral narrative of love and suffering, through her ability to internalize her own harrowing journey through young motherhood, divorce, and grief.”

Pacheco primarily combines the human form with the skulls of animals. She explains she has been using clay as a therapeutic medium since becoming pregnant with her daughter.

Sonni says she discovered sculpting in Los Angeles in 2012 when she stepped into her first class while six months pregnant. The Pitt Meadows native has good knowledge in hydro stone and growing crystals on forms.

She works for Grøss Creative Studio out of her home in Los Angeles where she resides with her daughter Ava.

Some Interesting Facts About Sonni Pacheco