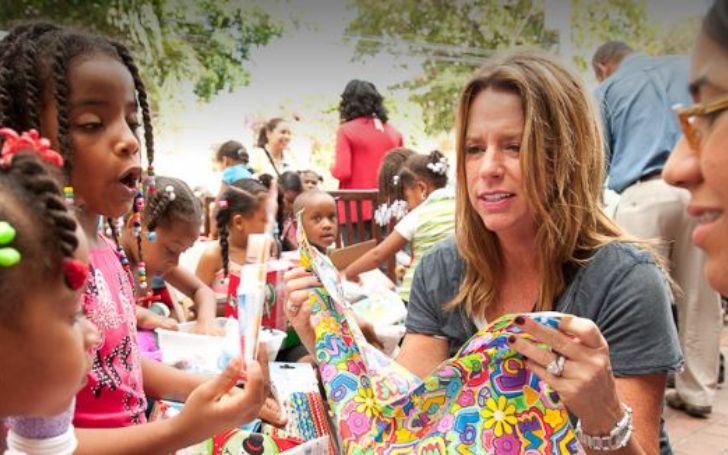 Jill Rhodes is a columnist, author, and journalist who has been covering lifestyle, social and political figures for more than 30 years. She though is better known as the ex-wife of the host of FOX News programs, Hannity and The Sean Hannity, Sean Hannity.

Jill’s ex-husband, Sean Hannity is one of the big names on Fox as a notable socio-political commentator. He is also equally notorious for some of the controversial things he doesn’t hesitate to share whilst cameras are still rolling. He more than often has a thing to say about the White House. But for all the attention he gets on his work, his life with Jill has sufficiently remained private.

As per insiders, Rhodes is quite opposite of her anchor ex-husband. Read more about her in the ensuing write-up; start from her history to the first time she met Hannity, their marriage, divorce, why they separated, her current whereabouts, and further.

Jill Rhodes Was Born In The 60s

The ex-wife of Sean Hannity, Jill Rhodes, full name Merri Jill Rhodes was born on Aug 27, 1962. The now 59 years old is from Alabama. She apparently is a native of Montgomery.

She has a brother who also works with her ex-husband on his TV show.

As per her now-defunct Facebook page, the Southern-born, Rhodes was a journalism student at the University of Alabama. She in addition also studied theology and pastoral counseling at conservative hotbed Liberty University. And a post on the institution’s website has also listed her as one of the former students.

She attended her high school in her native Montgomery, Alabama.

Jill Rhodes Has Been A Columnist; Where Does She Work Now?

Initially, Rhodes used to work for the Huntsville Times as their political columnist. It was during the early 90s also the time when she first met her husband. Rhodes also worked as a book editor in Manhattan during the year 1998.

She in past was also a host for TV and radio. After marrying Hannity, Rhodes, however, became a homemaker and later his advisor.

She now reportedly is an editor and columnist for national publications like Better Homes and Gardens. Rhodes additionally is the author of National Security Law: Fifty Years of Transformation.

Rhodes has also contributed to some charitable causes. Back in 2010, both she and her ex-husband separately donated $5000 to Michele Bachmann’s political action committee.

Also back in 2015 during Christmas, she visited the Dominican Republic and Haiti alongside her husband and others for some charity works.

Rhodes married the conservative political commentator, Sean Hannity in 1993. The couple remained husband and wife till 2019. When together they became parents to a daughter Merri Kelly Hannity and a son, Sean Patrick Hannity.

When Did Jill And Sean Meet?

Hannity during an interview with People in Feb 2002 said he met his ex-wife Rhodes when he was an employee for Alabama for WVNN radio. They both, at the time, were working in Alabama at the same radio station.

The year reportedly was 1991. Back then Jill, on the other hand, was working as a political columnist for the Huntsville Times. Rhodes, however, first saw the ex-WVNN host in person when he was at a mayoral debate that he himself had organized.

After seeing Hannity for the first time, Jill admitted to People that she had thought of marrying the Hannity host then and there.

I looked at his face and I said, That is the man I’m going to marry.

The ex-Hannity And Colmes co-host says he build up familiarity with Rhodes by sending her frequent voice mail messages and frequent exchange of ideas.

In 2011, talking a bit about his relationship with Rhodes, Hannity said he had fallen for his ex-wife even before meeting her in person. He first came to know about her through a piece Jill had written for a local newspaper that also included her picture. And it was her that image that made Hannity fall for the columnist.

She was really talented – gifted, but I really just fell in love with the little picture in her column.

Jill Rhodes Friends Warned Her Not To Date Sean Hannity

Apparently, every one of her ex-colleagues from her past job as a newspaper columnist had warned Jill to stay away from Hannity. They reportedly were all against her dating Forbes’ most watched host. Further even their marriage pastor questioned Jill if she was certain of marrying Hannity. The host/author had gotten into a political argument with their marriage officer.

They nevertheless tied the knot and until the late 2010s looked like the “it couple.”

The New Yorker and his former partner, Rhodes when still husband and wife, were regular churchgoers. They also raised their two children as Catholic and even sent them to schools of the same faith.

Jill Stood By Sean During His Controversy

Despite no longer husband and wife, back when they were together, Rhodes stood by her ex-husband’s side even when he had involved himself in allegations of sexual harassment by a former regular guest on his show, Debbie Schlussel in April 2017.

Though according to Schlussel herself it was more of an inappropriate behavior rather than harassment that the Trump supporter did her. Debbie at the time claimed Hannity had invited her to a hotel room in Detroit. This the father of two proposed after Schlussel had approached him for a book signing.

When in a hotel, Debbie said, Hannity made a move on her but she refused after which Schlussel added Rhodes’ former partner banished her from his show. Hannity on the other hand has denied the accusations.

Sean Dedicated A Book To His Ex-Wife, Jill Rhodes

Hannity says his 2002 book, Let Freedom Ring: Winning the War of Liberty over Liberalism is his dedication to his ex-wife, Jill Rhodes. When he first declared this, he had referred to Rhodes as “the love of his life.”

The Deliver Us From Evil writer once called his children with Rhodes, “the greatest gift God ever gave to me.” While announcing the book, Hannity had also said,

“The most important acknowledgment I make is to my family – my wife, Jill, and my two children, Patrick and Kelly, to whom I dedicate this book.”

Rhodes’ ex-husband added his wife and their kids were the ones who had put up with the long work hours for the project that he needed to invest in.

He further stated it was because of them that he felt the book was something worth going for. The former UC Santa Barbara host said he was really blessed to have his then-wife and children in his life. Hannity in the past had also thanked his ex-wife and credited her for his success on Fox News.

He during an interview called Jill the brain behind his prominence on Fox and a contributing factor in helping him finish his best-selling book, Let Freedom Ring.

Jill And Sean Kept Their Divorce Secret For Years

Hannity and Jill’s divorce has quite a bit of mystery and a few or two questions. For starters, the former couple apparently had long separated before the news of their divorce made it to the public in late 2019 to early 2020.

Rhodes and her ex-husband, the Marconi Award winner announced their divorce in 2020. The parents of two, however, had already signed their divorce papers a year prior, reports Page Six.

As per People they had gone their own ways around 2016. Rhodes since had also stopped appearing by the devout Catholic’s sides, especially at Fox News events.

When finally divorced, they issued a joint statement wherein they implied that they were going to remain friends for the sake of their kids. Apparently their friends and family had known about their split for years. The former couple apparently kept the news of their split secret because they didn’t want to upset their children, Patrick and Merri Kelly.

The former husband and wife still attend their children’s tennis tournaments and other functions as a family. Before their separation, the couple was living in Long Island, New York also the place where Rhodes’ ex-husband Hannity hails from.

The Reason Behind Jill Rhodes And Sean’s Divorce

Considering the fact that for many years they appeared to be a perfect couple, people were in quite a shock to know about their separation.

Rhodes also didn’t mince a word when people criticized her former partner for defending his bosses at FOX when the network was under fire in the summer of 2016 in the wake of several sexual harassment cases. She also used to accompany the father of her children in several of his freedom concerts.

It, however, is unclear whether infidelity or unfaithfulness was the reason behind Rhodes and Sean’s divorce. The thing worth remembering is Hannity had also caused a minor controversy on social media back in 2013 when he admitted to a caller on his radio show that he did use to think about other women despite being the husband of Rhodes.

Page Six reports Sean didn’t cheat on Jill and that there was absolutely no foul play during the separation. It was rather mutual. Daily Mail later reported Sean’s busy work life may have contributed to the split.

Jill And Sean Marital Life After The Divorce; Is She Married To A New Husband?

While Sean as of late has been in a relationship with fellow conservative news network anchor, Ainsley Earhardt, a University of South Carolina graduate. The news reporter couple apparently has been dating since 2019 but hasn’t spoken about their relationship publicly so far.

Conversely, though, no such specifics regarding Rhodes’ life have been in any archives whatsoever. Unlike her former husband who is quite blunt on platforms like Instagram, Facebook, and Twitter, Jill is yet to be seen on alike domains giving updates on what is going on in her life post the Hannity chapter.

It consequently is up to the best theories as to what Rhodes has been doing in recent, especially with respect to her personal life.

Jill Rhodes Might Be A Multimillionaire Following The Divorce With Sean

Jill’s ex-husband, Sean has been signing new and lucrative deals for decades at Fox. His show, Hannity, too has seldom dropped from the number one rated show on Fox News. But among all titles, his highest-paid star on Fox is something that people prefer to call him most of the time. The 60 years old with an annual salary of $45 million is reportedly the owner of a massive wealth estimated at around $300 million.

Having discussed that and not to mention his fairly recent divorce with Jill, it is pretty given Rhodes may have had sizeable or even more gains following the separation in terms of settlements and all. Though the details of the divorce clause and the financial rulings between the ex-couple are yet to be made public. It nonetheless wouldn’t be much of an argument in saying that Rhodes’ net worth was inflated by millions or even by eight figures in the aftermath of her split from the FBI criticizer.