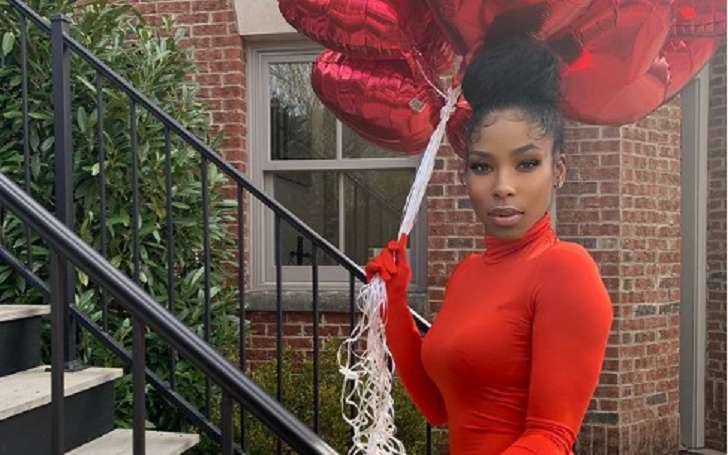 Arionne Curry is a nurse by profession. But, Curry, over the past few years, has been in the headlines as the mistress of Martell Holt, a reality TV star. He is better known for his appearance in the TV series Love and Marriage: Huntsville along with his then-wife Melody Holt.

Well, Martell was still blissfully married to his spouse Melody when the TV personality began his extramarital affair with Arionne. However, soon after their romance started surfacing in the media, it also took a huge toll on Martell’s marriage to Melody. As of now, the former flames who shared four children together officially are divorced.

So, let’s find out if Arionne was the only reason behind their separation. In the meantime, also know if Arionne and her partner Martell are still together, their son, and many more facts about Curry!

As per some online tabloids, Arionne is a nurse. Unfortunately, any other details about her professional endeavors are yet to be revealed. As we have mentioned above, the nurse has actually been in the media for her personal drama rather than her professional success.

Her Age and Other Early Life

Reportedly born and raised in Alabama, Curry is 30-year-old as of 2022. Talking about her ethnicity, Curry is an Afro-American and is American by her nationality.

Her other early details including her family background and her school life are, nevertheless, still unavailable.

Arionne Curry Is Popular As The Longtime Mistress of Martell Holt: When Did They Meet?

As previously stated, Arionne gained huge attention only after her romantic relationship with Martell made headlines in the late 2010s. The two met for the first time through Martell’s cousin several years ago in the mid-2010s.

Curry and her colleague attended the barbecue party at his cousin’s home located in Huntsville, Alabama. It was where the two exchanged their phone numbers and started talking. At the time of their meeting, Arionne was 24-year-old, while her new boyfriend was 34.

Initially, they became close friends. And gradually, their friendship turned into love. In an exclusive interview with UNWINEWITHTASHAK, Curry told Tasha K she knew that Holt was married to his wife only about a year after they began dating,

“I found out he was married within those 9 months. But our conversations kept me there. And I was wrong for continuing to deal with a married man. He did not lead me to believe that he was going to leave his wife. He always felt guilty for the situation that he put her in at first.”

She added that her partner “didn’t even give a lot of details.” She also acknowledged, “it’s my fault for continuing to have a relationship…”

Did Arionne’s Whirlwind Romance With Martell Led To His and Melody’s Divorce?

As soon as Martell’s infidelity hit the media, his marriage with his long-time wife Melody Holt also hit a rough patch. The couple tied the knot back in July 2008, in an intimate wedding ceremony. They led a happy marital relationship for years. But things between Martell and his ex-wife started becoming worse and worse when his cheating scandal came out.

Meanwhile, Curry said it was never her intention to put any strain on their marriage. Instead, she said the only one responsible for all that’s happened is Martell, the then-married man who was continuously pursuing her.

The reality TV star Melody filed for divorce from her husband in 2020, citing an “irretrievable breakdown” in their marriage with no possibility of reconciliation.

What Led Melody To File For Divorce From Her Husband?

Amidst her husband’s ongoing cheating scandal, the 36-year-old Love & Marriage: Huntsville star said that her hubby’s infidelity wasn’t the only straw that ruined their marriage. She told HollywoodLife what actually compelled her to take this final step,

“For me, during that time there were certain statements and comments that were made that showed me that he had not matured at all.”

“That showed me that he was still at step zero and hadn’t even gotten to step three, four or five.”

Although Martell is now divorced from his spouse Melody, he had a close relationship with his wife even after she knew about his dishonesty. After everything went public, he was actually in dilemma to move forward whether with Melody or with Curry. His ex-wife told the host Carlos King during the Season 3 reunion of the show,

“What I feel is that Martell couldn’t leave either of us alone. He was still there [with me]. If I hadn’t have left, he still would have been there.”

Melody also recalled her husband’s attempt to cut off his relationship with Curry. But, somewhere in the line, the reality star always found his way back to her.

Curry who never appeared in Love & Marriage: Huntsville said she isn’t actually reasonable for the end of Martell and Melody’s relationship. In the same talk with Tasa K when asked if she would apologize to Melody for having her relationship with her husband. She said there are lots of bad things that happened behind the scenes which are still lingering on her mind. So, she will never apologize to her.

She further said that Melody even, “brought her hairstylist and friends to my home. She says she wasn’t trying to fight, but who brings three people to your house?”

Curry also stated it was quite wired as Melody was following her rather than checking her own man.

But at the end of the discussion, she said she would only apologize to Melody if she receives an apology back from her.

Arionne is the mother of one kid, a son with her partner Holt. She previously suffered one miscarriage and had one abortion too.

At the same time when she was pregnant with their son, Melody was also impregnated by Martell. At the time, Martell reportedly asked her to abort the baby, but she totally denied his proposal.

In addition, her partner Martell has four kids with his ex-wife. Their children are Maliah Selene, Mariah, Martell, and Malani Holt. Their fourth child Malani was born in January 2020.

Although things got extremely messy between him and his ex-wife, they have now shared joint legal and physical custody of their all kids.

Curry Also Has a Kid From Previous Marriage

Prior to being a mother of a son with Martell, Curry has also a daughter from her previous relationship. She often shares her girl’s photos on her Insta but has yet to reveal anything about her baby’s father.

Since Martell’s divorce from Melody, the reality star has continued his affair with Arionne. But, they have kept their relationship a little bit private.

In one of her stories caught by The Shade Room, she wrote that her man never left her side. Take a look,

Meanwhile, talking about whether or not the two got married, it looks like they are yet to tie the knot.

Who Is Katherine Hough? Everything About Julianne Hough’s Sister