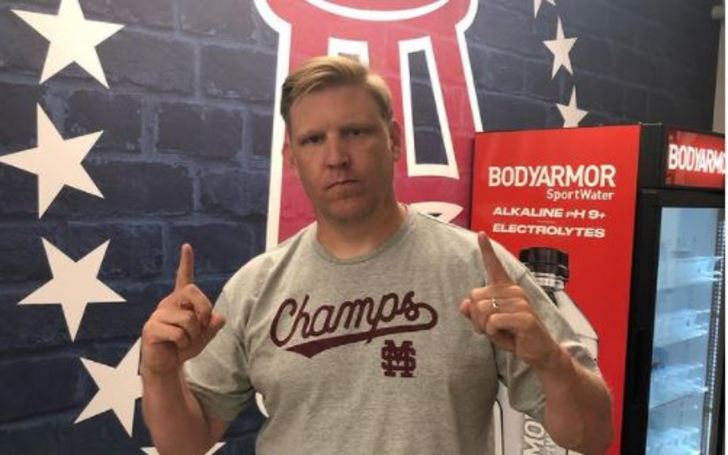 Brandon Walker is a sports gambling analyst who works for Barstool Sports. Walker provides a punditry on college and commercial sports. He has worked the majority of his life as a sports writer, analyst, and occasional host.

Walker is known for his great comedic timing, willingness to be self-deprecated, and above all, for his ridiculous knowledge of football. His rise to fame is something that deserves attention.

And so the piece down below discusses an un-cut version of Brandon Walker’s career, his wife, and his children.

Brandon Walker Is Yet To Reveal His Early Life

While it is unclear when Brandon was born, he has been noted of celebrating his birth anniversary on April 14. Apparently, Walker is so secretive about his age that not even his co-hosts have knowledge about what year he was born.

Additionally, he is also quite concealed about his paternal heritage. He has barely teased the conversation about his upbringing or about his parents. Though some suggest he is from the South.

Brandon allegedly graduated from Mississippi State. He has a sister, Caitlyn Walker.

He Got Into Sports Analysis Right After The College

After graduating college, in 2004, Walker landed a job as the sports editor of the Daily Times Leader in West Point, Mississippi. There he covered high school sports, junior high softball, and little league for a newspaper circulation of 2,000.

For the next decade or so, he moved around newspapers, cruising throughout Louisiana, and had stops in Fort Walton Beach, Florida, and Meridian, Mississippi. He thought SEC Country was his “big break.” However, but then Cox Cox Media Group abruptly pulled the plug on it when everyone in the building, including the lead decision-makers of the digital network, believed they were on a five-year plan and exceeding all their goals.

So in 2018, Walker exited SEC Country thanks to Cox’s decision. The following year, in early 2019, he started doing videos for the offshore betting site MyBookie for a modest digital audience. He would leave MyBookie in April 2019 and join Barstool.

In under 10 months after joining Barstool, Walker became one of its most prolific stars. He is a regular on The Yak with Dan Katz at 1 pm ET. He also hosts Picks Central at noon ET on Barstool Radio’s daily SiriusXM lineup. The six-foot-five inches tall gambling expert also does sketch videos for social media and the website. Additionally, he is also a member of the site’s weekly college football show with Portnoy, Katz, and Kayce Smith.

Brandon Walker Landed In Barstool Because Of The Feud

Walker joined Barstool in the aftermath of a feud between Barstool and his ex-employer, MyBookie. The dispute started after MyBookie questioned the legitimacy of David Portnoy’s gambling addiction.

Portnoy, the founder of Barstool, in response, leaked the complaints of MyBookie’s customers. The company, in consequence, lost customers and sponsors due to the loss of credibility that stemmed from David’s whistleblowing.

Barstool then took one of MyBookie’s most important employees, Brandon Walker. Brandon since has become one of the most famous figures at Barstool.

The Barstool comic anchor is married. He, however, has not revealed who his wife is. While he is quite expressive with his work life on Instagram, he is yet to share a post about his family. He has mentioned his spouse and children on numerous occasions either through Twitter or Ig but is yet to discuss them in detail. Or share a picture of them. Brandon and his wife have four children; presumably three daughters and a son.

In April 2021, some group of people called the employer of Walker’s wife and his kids’ school in the aftermath of what he had said about a specific football team.

Brandon Struggled Before Coming To Barstool

Walker started working as a writer after graduating from college. While he rose the ranks to the editor, he found it difficult to make the step from small-town publications to major news. The polarizing analyst moved around the country in an attempt to find work at big companies. He, however, always ended up working for small outlets.

Walker says initially he failed a lot at trying to get a high-paying job, but he didn’t give up. The projectionist claims he has his long list of experiences to thank for landing him a job at Barstool. When they hired him, the digital media company admired him for his enough experience as a sports writer and his personality to execute the role.

After talking with his wife, Brandon finally took the job. He says he finds Barstool fun because the company doesn’t attempt to censor or control what he wants to say on the camera.

“Barstool is real, which means whatever you really are, that’s what you portray at Barstool,”

The host of Walk The Line stated in an interview on Barstool’s YouTube channel.

He also explained he gets to portray whatever he really is. Walker also complained about how the world except Barstool tells their presenter where to be, what to do, where to stand, and how to act. He admired Barstool saying, “Here everything! Go!’ It’s up to you.”

Brandon Says His Wife Supported His Move To New York

When Walker got the job at Barstool, the former MyBookie’s employee wasn’t sure how his wife would react. He was nervous about telling her that they have to go to New York because he’d landed a gig with Barstool Sports. Walker, however, got a better reaction than he’d anticipated. His spouse agreed to move without condition. She was, in fact, thrilled that her husband had finally gotten the big break.

Ms. Walker then informed her own employer that she was moving and started working on plans to move the family to New York. Brandon referred to his wife’s support as ‘abnormal.’ He though admitted if he would have the same mindset if he was in his wife’s position.

The Mississippi State University graduate said he would’ve put up a roadblock. He added while he would have eventually done it, he and his family would have had to jump over every obstacle.

People for a while criticized Barstool and even Walker for their relationship. They assumed Barstool offered Brandon to piss off MyBookie, and not because of the potential that David saw in him. Walker, however, from the first day, has been proving himself as a standout asset to Portnoy’s form. Throughout his time at Barstool, he showed that he wasn’t just a pawn in the duel between David and MyBookie.

Walker has become a notable figure in the presentation world, and he believes that his 10-year-old son, Tommy, has a similar talent or even more. Among his four children, it’s his son that he claims — has shown the most interest in what his father does. In an interview, Walker said Tommy once talked to him and said, ‘Dad it’s time to start my podcast. When are you going to start my video show?’

As far as the theories go, Walker is speculated to be much richer than he appears. The sportscaster has appeared besides jets and luxury items on several occasions. And although it has not been disclosed if the things belong to him, he is very much assumed to be an affluent star for a sportscaster and host. Still, the estimated figures behind his net worth are no less than a mystery itself.