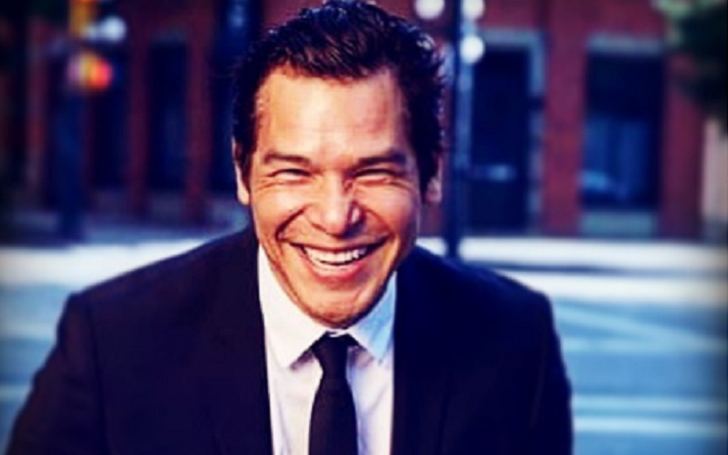 Nathaniel Arcand is one of the industrious and prolific actors from Edmonton, Alberta, Canada. Over the years, Nathaniel has amassed numerous movie and TV credits. Most notably, the indigenous actor played in the Canadian drama series North of 60. He gained further recognition after portraying Agent Clinton Skye on the CBS drama series FBI: Most Wanted.

Besides, along with his marvelous acting career, Arcand has also been leading a happy married life with his graphic designer wife Jolene Arcand. In the past, the actor was married to Shar Arcand. The former flames also have three grown kids.

In the below-mentioned article, we will further explore Nathaniel’s life. Let’s take a look!

Nathaniel Arcand Was Raised By His Single Mother: All About His Family

Born and raised in Edmonton, Alberta, Arcand grew up with his five siblings. All of them were nurtured by their single parent, a mother. So, there were also lots of responsibilities Nathaniel had to take care of his siblings. His great grandparents also helped him a lot throughout his life.

The actor often shares photos of his doting mother on social media platforms, showcasing the strong bond the son-and-mother duo have shared. Back in March 2020, Nathaniel posted a single picture of his mom on the occasion of International Women’s Day.

Also, in June 2017, Arcand shared a photo of his dad on the occasion of Fathers Day. He wrote,

How old is Nathaniel?

Nathaniel is Nēhilawē (Plains Cree), the Native American tribe. His nationality is Canadian.

His passion for acting, especially for action movies and TV shows developed after Arcand saw some Bruce Lee movies during his childhood. He soon asked his mother how He could be in the show business. And his mother told him that He should follow his passion and dreams to be an actor like Bruce Lee, a late martial artist, and actor.

Arcand’s first acting stint came when the then-hoping young boy was in Junior High School. He performed with ten other students and was the only one student who played two different roles in the play.

It was many years later that Nathaniel got the chance to land another acting gig when a talent agent Darry Mork discovered him. Later on, the highly-devoted actor was also paid $250 for his one hour and forty-five minutes performance.

He snagged his first acting role, playing Tree-Climber in the movie Savage Land with Corbin Bernson in 1994. The same year, Arcand scored the role of William MacNeil in the TV series North of 60, the character that amassed him huge fame. He appeared in the show until 1997 along with Tina Keeper, Tom Jackson, and many other notables.

In the following few years, the actor featured in the likes of Caitlin’s Way, Before We Ruled the Earth, Longmire, Smallville, and The Lone Ranger as well. From 2007-19, Arcand played the recurring role of Scott Cardinal in the TV series Heartland.

In addition, Nathaniel has also appeared in numerous movies like Speaking of Sex, Skins, Ginger Snaps Back, Cold Pursuit, and more. Furthermore, in 2020, Arcand had roles in two movies Monkey Beach and Indian Road Trip.

Yes, Arcand left the crime drama CBS series FBI: Most Wanted.  He officially announced the news via an Instagram post in June 2021. He wrote,

He made his debut in its 18th episode of the first season, playing Agent Clinton Skye, a well-trained sniper with a law degree. The highly-devoted actor played in 14 episodes out of 15 episodes in its 1st season. Throughout its 2nd season, Arcand played in only three episodes. And the last FBI: Most Wanted episode Arcand portrayed in was ‘Deconflict’ on 8th December 2020.

Besides, Nathaniel is a music lover who often shares photos of himself, playing guitar and other musical instruments. He also loves to sing.

Who is Nathaniel Arcand Wife? All About His Married Life

Nathaniel is now married to Jolene Arcand. The couple tied the knot on 5th December 2016, in a private wedding ceremony. Although the duo has yet to disclose more about their dating life and wedding, they are leading a happy married life since their 2016 nuptials.

Also, Nathaniel and his wife Jolene are quite active on social media handles. And they never felt hesitant to share their terrific bond with the public. They frequently share romantic photos of themselves on their respective social media profiles.

In the meantime, many of their fans also wonder to know if they have any children or not. In fact, the loving duo doesn’t have kids, neither they have revealed anything about having kids in near future.

His spouse of over five years, Jolene is an aspiring graphic designer and visual design communicator. Born in Alberta, Canada, Jolene went to the Southern Alberta Institute of Technology and studied Nutrition for Healthy Lifestyles. In October 2021, the celebrity spouse completed her graduation with communication design essentials from Emily Carr University of Art and Design.

Nathaniel Arcand Past Marriage With Shar Arcand: They Have Three Children

Arcand was previously married to Shar. The former flames remained highly secretive throughout their marriage. So, most parts of their nuptials like when did they exchanged their vows, how did they separate, and more are still out of the media.

But, the exes shared three grown children, a daughter Trisha Arcand and two sons Griffin and Jaden Arcand. Back in October 2019, the actor uploaded a throwback photo of his sons with the caption,

Apparently, Nathaniel Arcand’s son Griffin has also followed the same career path as his father. Born on 19th October 1997, Griffin has appeared in a couple of TV shows like DreamKeeper, Moccasin Flats, and more.

What is Nathaniel Arcand Net Worth?

Nathaniel’s net worth is $3 million as of 2022. His main source of income is his work in both movies and TV shows. The best box office hit movie Nathaniel appeared in was Cold Pursuit that grossed over $76 million worldwide. He played in the movie sharing the screen along with Liam Neeson, Tom Bateman, and Tom Jackson.