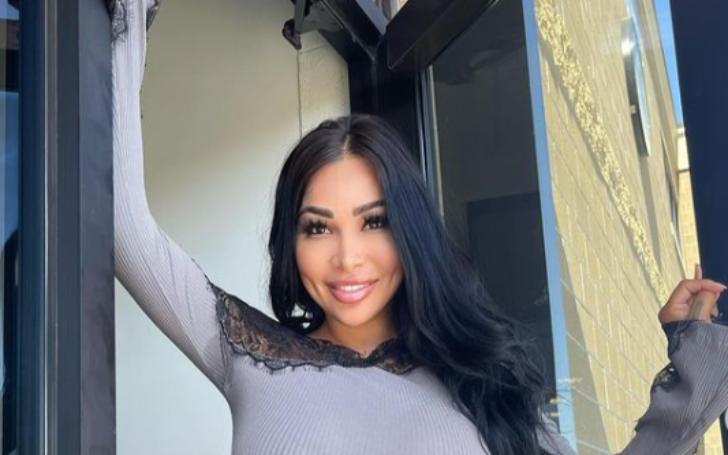 Brittanya O’Campo Razavi is a well-known social media influencer and reality TV star with over 7.2M followers on her Instagram handle. She rose to fame after appearing on shows like Rock of Love, Charm School, I Love Money and many more.

Apart from her blooming social media career, Brittany also makes quite a good income through her Only fans account. Although Brittanya is very active on her social media, not much is known about her personal life. In fact, there is a lot of curiosity about whether Brittany is dating a boyfriend or is already married.

Well, we have got answers to all your queries about Brittanya Razavi. Let’s get right into the article to find out other interesting facts about her including her boyfriend, net worth, family, & more.

Brittanya O’Campo Razavi was born in Oxnard, California on July 7, 1985, and grew up along with her parents in her hometown. Her zodiac sign is cancer and she belongs to a Caucasian ethnic background. Her mother’s name was Mary Campo. However, she has not revealed details about her father yet.

Besides, she also has four siblings, two sisters Tiffany O’Campo & Treasure Campo, and two brothers. Her oldest sister is Treasure Campo, who is married with two children.

Similarly, her brother name is Isaiah & was born in 1990. Unfortunately, the details about her other brother are not available in the media. Among all her siblings, Brittanya is the closest to Tiffany O’Campo. In fact, they often make appearances together on social media.

As per Brittanya’s LinkedIn profile, she completed her schooling in her hometown. Later, she joined Atlanta International School for her higher studies. She joined the college in 2011 and graduated in business in 2016.

Brittanya Had a Traumatic Childhood: She Became Teen Mom At The Age of 15

Brittanya revealed in a podcast with No Jumper that she had a very rough childhood. She disclosed that she had to go through a harsh situation because of her parents. According to her, her mother had cheated on her father which led to their divorce. Soon after this, her father was sentenced to prison which made her life further difficult as she had to struggle to make ends meet.

Things worsened after Brittanya became pregnant at the age of 15. Due to the lack of guidance and support, Brittanya had to go through a difficult time being a single mother. She further said that her baby’s father was her long-time crush. He was in Navy service but she did not reveal many details about him.

Furthermore, she made a post on 6 March 2020, informing everyone that her mother passed away on that day. Her mother reportedly died of cancer.

Is Brittanya Razavi Married? Who is Her Husband

Brittanya Razavi is a married woman and tied the knot with Lucky Moe Razavi in 2010. Her husband is the CEO of Digital Media and Entertainment Group.

Though she walked down the aisle with Lucky later, she reportedly had not imagined that she would ever marry her. Talking about her relationship with him, she stated that she had opened up everything about herself to her husband before getting married. She also said that she just wanted to have kids with Moe and he could leave her after that.

She also told him that she would not ask for any child support after that. But Moe already had a heart for Brittanya and he said,

Brittanya was speechless after that and further said,

mm-hmm I wasn’t ……you know and he believed in me he let me do my thing and for that, I’m forever like like he has my heart for life the relationship is still super strong yeah that’s all I mean

How Many Kids Does She Have?

As mentioned earlier, Brittanya gave birth to her first child at the early age of 15. She has three kids as of 2022. From her marital bond with her hubby, she had two sons.

The couple welcomed their first child named Cash king Razavi, on March 16, 2001, and later gave birth to their second child named Legend King Razavia on 22nd October 2021. Further, she has also made an Instagram handle with over 136K followers under the name @cashandlegend.

The beautiful Brittanya rose to prominence after she started appearing in American Reality TV shows like Rock of Love, Charm School, and I Love Money. She utilized her fame from shows and gained many followers on her Social platforms.

Apart from Brittanya’s social media career, she is also an entrepreneur. She has her Online clothing store named 187 Avenue. She has been selling dresses with her different prints.

As per her LinkedIn profile, she had been working in her own company for about 14 years and 5 months.

As aforementioned, Brittanya has been working as an Instagram model. She is active on her Instagram under the name @imbrittanya with over 7.2 million followers.

She usually does brand endorsement and makes money promoting products and services. She is mostly seen collaborating with a famous fashion brand named Fashion Nova. She also collaborates with many bikinis and Lingerie brands.

She Is Also a Youtuber

Brittanya is also a Youtuber & her fans and followers love to watch her vlogs with her kids. She has posted many videos on her account under the name Brittanya Razavi. On her channel, she has about 128K followers as of 2022.

Although she doesn’t post regularly, she gets quite a nice number of views on her videos. Apart from that, she has also appeared in various podcasts from her collaboration with other YouTubers.

Brittanya Makes Million Out of Her Only Fans Account

The famous social media influencer is also renowned as Only Fans celebrity. She is active on her Only Fans account and makes quite a good amount of money from that. She has made two accounts for her Vip and Non-Vip members.

Her subscribers have to pay a minimum of $20 to get access to her account. She has made different subscription bundles i.e $42 for three months, $72 for six months, and $120 for 12 months.

What is Brittanya Razavi’s Net Worth?

Brittanya has been able to amass quite a good amount of fortune through her involvement in different sectors. Her estimated net worth is around $4 million.

Her major source of income is modeling and brand endorsement. She also makes good side income through her  Only Fans account and her online store.

What is Brittanya Razavi’s Body Measurement?

Brittanya Razavi has a decent height of 5 ft 3 inches and her body measurement is 38-27-43.