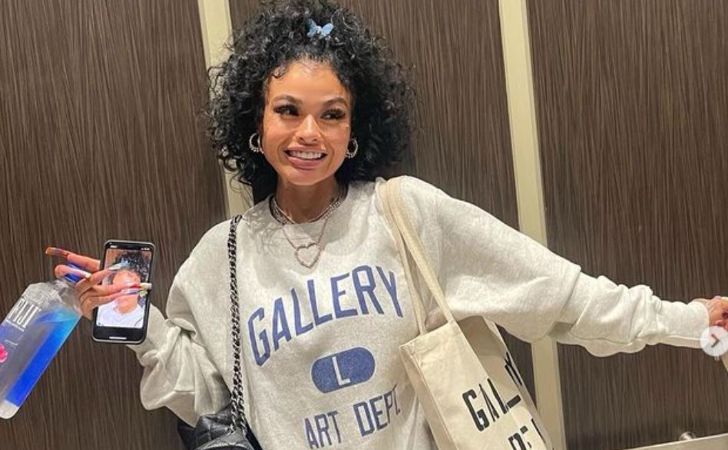 India Westbrooks, famous in the media as India Love, is an actress, model, singer, reality TV star, and social media personality. She gained early traction as a blogger on Tumblr, and eventually became a sensation on platforms like Instagram and Vine. Further, she is also praised for her idea of self-love and her outspoken attitude.

And for the same reason, Westbrooks also get caught up in controversies. Well, in this article, we will cover up all these aspects of her life. Not only this, but we will also discuss India Love’s boyfriends and all the relationships she has been in.

Continue reading if you want to know.

Who Is India Westbrooks?

India Westbrooks is primarily a social media star but has also made a mark in the reality TV world. She was born on February 3, 1996, in Compton, California. As of 2022, she is 26 years of age and her birth sign is Aquarius.

She is one of five daughters of father Warren Westbrooks and mother Candy Westbrooks. She spent most of her childhood in Compton, along with her parents and siblings. All her sisters Crystal Westbrooks, Morgan, Bree, & Brooke are well established and doing well in their professional fields.  She also has two brothers Pop and Blake Westbrooks and she shares a great relationship with all her brothers, sisters, and parents.

Talking about her education, she is a graduate of Santiago High School.

Her real name is India Westbrooks but she is famous as India Love. Talking about her ethnicity, she belongs to mixed ethnic background.

While Westbrooks stands as one of the most successful social media stars, she began the journey years ago from the scratch. She began her career through Tumblr blogging in 2011, when she was just around 15 years of age.

Though she didn’t gain enough fame on Tumblr, she discovered the career she wanted. Soon enough, she also expanded her wings on other social media platforms like Instagram and Vine, gaining recognition as “India Love.” With all the fame, she soon grabbed the attention of several established media houses including BET Networks, which also opened their door in TV.

As of 2022, she has over 5.2 million followers on Instagram and has over 187k followers on Twitter. She mostly posts fashion-related posts on socials and has already made a mark as a fashionista.

She Appeared In A Reality TV Show ‘The Westbrooks’

With all the fame and recognition she achieved as a social media star, she has also made her entry into television. Just around the beginning of her career in 2015, she was discovered by a renowned media house BET Networks. To her benefit, the media house offered her and her sisters to appear in a reality show The Westbrooks.

The TV show stars all her sisters but is led by India. Well, the series was decently received in the media but also was hugely compared with Keeping up with the Kardashians. Not only this but India was also criticized for allegedly following the footsteps of Kendall Jenner.

Apart from The Westbrooks, she has also appeared in another TV series Droppin’ Cash: Los Angeles. In the series, she appeared alongside other actors like Alfredo Flores, Xion Michelle, Toni Romiti, and others.

India Was Against Appearing In The Westbrooks Initially

Not many know, but India Love was against the idea of appearing in a reality TV series like The Westbrooks. As per her, she finds it hard to deal with things that come along with appearing in such reality shows.

But despite her initial decision to avoid the show, she finally made up her mind just because he sisters wanted to be in the show. In one of her interviews with XXL, Westbrooks stated,

“It’s very hard for me to deal with something like that, especially in the public eye where they’re seeing exactly what I went through. In all actuality, I never wanted the reality show… I sacrificed that decision [to do the show] for my family because that is something that my sisters were dying to do and that my family knew would be a good opportunity…”

Though the show was praised, it didn’t live up to the hype.

Well, she has been through a lot of criticism and bullying, especially in her early days. As per the reports by Paper Magazine, she faced a lot of bullying at the school in Corona after moving from Compton.

In a candid interaction, she stated that nobody wanted to be with her at the new school and was left all alone. She said,

She had a similar experience after she started posting on Tumblr and Instagram. As per her, everyone would make fun of her which broke her confidence as a person. She added she would get tattoos as a coping mechanism.

However, she eventually found better ways to deal with all the frustration. Talking to Rolling Stone, she said,

“They didn’t know me, but they were judging me, and it hurt. The hurt that I was feeling on the inside, I wanted to feel on the outside. I began to get tattoos to feel that pain. But as I’ve matured, I’ve learned that there are better ways to cope. I can’t control the way the way that people feel about me.”

She Credits Someone Else For Her Successful Musical Journey

Westbrooks is decently successful in her career as a singer as well. She has released a few songs on her YouTube channel that includes LOCO, TALK YO SH!T, & Pretty.

Her songs are decently successful but she credits her singing career to American rapper Will.i.am. She says the rapper was the one who inspired her to make a move. They met for the first time during the shooting of Boys & Girls and instantly approached to become the brand ambassador of Apple headphones.

Their brand collaboration soon turned into a musical collaboration in the song Pretty. She talked about this journey during an interview with Paper Magazine. She said,

“After that, he sat me down and told me that he sees more for me and asked if I would trust him to take the next step to help me develop as an artist. I kind of was shy about it and didn’t know what to say because sometimes my nerves step in, but I had to go for it because I would be crazy not to take that opportunity.”

Check Out The Song Here:

She also toured with Black Eyed Peas as a show opener. She said,

“This is a once-in-a-lifetime opportunity, any artist – especially a much-developing artist at that, it’s heartwarming to know that Will feels strongly about me as an artist to where he wants me to jump right in… To be going on tour with the Black Eyed Peas? To open up their shows? It’s mind-blowing to me.”

Unlike many singers out there, India loves to talk & spread self-love and compassion. She is very vocal about loving oneself and strongly stated it as one of the most important things in self-growth.

In fact, she even tried to reflect it through her songs. In her single Talk Yo Shit, she clearly spreads the importance of self-love, which she came to during her struggles in the early days. About the matter, she said,

“I felt like it was something that I really needed to highlight because in today’s world everyone is trying to be the same way, trying to look the same, have the same body shape and everything – I just wanted everyone to stay uniquely them, stick with who they are and know everything else will be fine.”

Like any celebrity, Westbrooks’ love life has also been a matter of media scrutiny. In fact, over the years, she has been linked with several men like Lil Yachty, Rick Ross, Sheck Wes, Brandon Wimberly, Cliff Dixon, Lou1etay, Soulja Boy, Rich the Kid, Justin Combs, Game, and many others.

However, she has denied most of the linkups stating all the rumors as false. She also once addressed the common perception about her being in numerous relationships as baseless. She said,

“Another thing people get wrong is that I’ve dated all of these men. That’s probably the No. 1 thing that people have gotten wrong about me… But just because I might take a photo with a guy doesn’t mean that I’m dating him, fucking him, or none of that shit. That just means that I’m getting to know the person, having a good time, and wanted to share it with the world.”

That said, there is a possibility that she could have dated a few from the list, Justin Combs, Brandon Wimberly. Besides, she also dated rapper Drake in the past, as per Mirror. Well, that’s the past, but who is India Love’s boyfriend in the present?

There are rumors that she is dating Football tight end Jonnu Andre Smith. Though they have not confirmed the news, they have been spotted several times together which acts as a basis. They were also spotted together in a zoo during Easter.

How Much Is India Westbrooks Net Worth?

As a social media star, India has amassed a large sum of money, which comes from brand endorsements. Further, she also has appeared in a few TV series which has added up to her wealth. Well, as of 2023, she has a net worth of $1 million, as per Celebrity Net Worth.