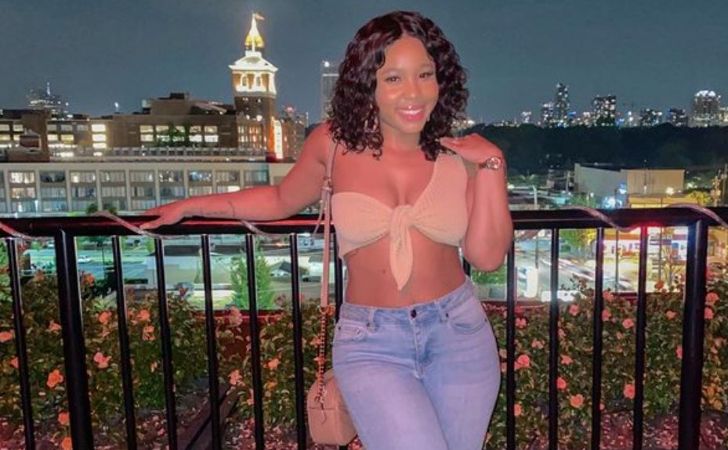 Kennedy Franklin is a former cheerleader and currently serves as the Executive Assistant at KS Lewis Media. She is most famous as the youngest daughter of American gospel singer Kirk Franklin.

A graduate of Baylor University, Kennedy is just 24 and has already achieved pretty much professionally. In fact, she is also very much popular on social media platforms like Instagram and Twitter as well.

Well, in this article, we are going to explore some untold details about her career, parents, and also find out if she is married or dating a boyfriend. Let’s zoom on.

Who Is Kennedy Franklin?

Like we said earlier, Kennedy Franklin is the youngest daughter of father Kirk Franklin and mother Tammy Collins. She was born on May 4, 1997, in Texas. As of 2021, she is 24 years of age.

Back in June 2021, she shared a beautiful photo with her dad on her Instagram where she was all praises about him. On the given Father’s Day post, she wrote a lengthy caption, where she expressed her love for her father. Check out the post here.

Kennedy has a very good academic background. After finishing high school, she attended Baylor University from 2015 to 2019, where she finished her bachelor’s degree in journalism. Later, in 2020, she joined Savannah College of Art and Design, where she studies Advertising.

Unfortunately, she does not share a very good relationship with Kerrion. In fact, he is not even invited to family gatherings for a long time now.

Similarly, Caziah is her biological brother, who is younger than her. Well, she shares a great relationship with all her siblings.

What Does Kennedy Franklin Do For a Living?

From November 2016 to October 2017, she worked as a cashier at Spice Village. Eventually, after she finished her journalism degree, she went on to intern at Essence Magazine.

It is very much evident that Kennedy’s older half-brother Kerrion does not share a good relationship with their father. Their relationship has gotten worse to the extent that he released a private conversation with his father online that led to a lot of controversy and criticism.

In leaked audio, Kirk can be heard shouting profanely at his son. In the phone call from a while ago, he used some abusive words leading to a lot of controversies. He says,

I’ll put my foot in your a**, I will break your neck ni***, don’t you ever disrespect me,” to which Kerrion responds saying “I didn’t.

While many stood up against Kirk criticizing him, Kennedy on the other hand defended him saying,

If somebody keeps disrespecting me and spewing out false allegations that could ruin my reputation I would cuss them the hell out as well, I just think that as a grown person over the age of 30 you just don’t air out business. But if you wanna air out we can air out. You don’t gaslight people and expect them to be nice to you…and then be mad when they respond.

She Was Heavily Bullied Online In the Past

Back in January 2017, Kennedy became a victim of the online bully. She was reportedly bullied by a couple of religious people. While their identity was not revealed but her father Kirk came to her rescue where he fired back at them.

The Emmy-winning gospel singer who was in Japan at the time made a tweet saying,

It’s 10 am here in Tokyo and my wife just called me to let me know my daughter is in tears because 2 so-called Christian people online have bullied her, and called her everything but a child of God

@kenn_elizabeth is! She’s a sophomore in college, a smart young woman, the apple of my eye, and a girl…

Very little is known when it comes to the love life of Kennedy Franklin. As of 2021, she is not married and she does not seem to have any plans to tie the knot any time soon.

But what about her boyfriend? Is she dating anyone? Apparently, she is single and not dating anyone. That said, it is highly possible that she has simply managed to keep details on her love life away from the media. In fact, back in 2015 & 2016, she made a few posts addressing her boyfriend as fine but she didn’t reveal the name, just in case if she was actually dating back then.

She Is Very Active On Social Media

Tammy Collins’ daughter Kennedy seems to enjoy social media. She is very active on all social media platforms, especially Instagram and Twitter. As of 2021, she has over 32k followers on her Instagram, where she often flaunts her bikini photos.

Do You Know Double Shot at Love star Derynn Paige