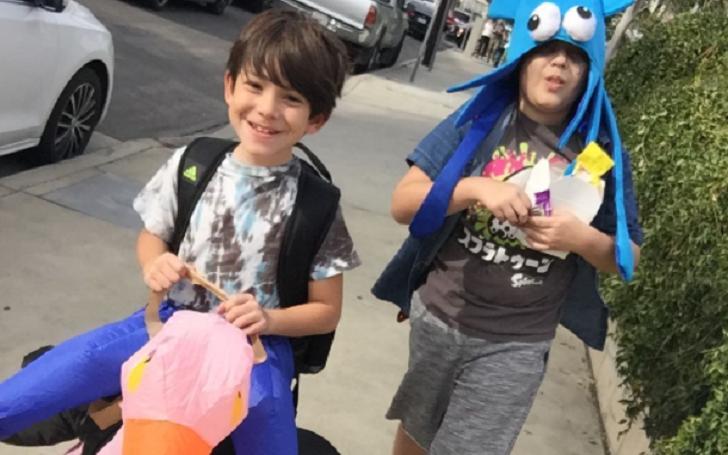 Thomas David Black is the son of one of the most adored actors Jack Black and his wife Tanya Haden. His multi-faceted father is mainly known for his comedic roles in several highly-hit movies like School of Rock, Orange County, and High Fidelity. On the other hand, his mother Tanya is an artist and musician.

Being the son of such talented parents, many people wonder to know if Thomas has also inherited their prowess. So, let’s find out what is the famed star kid doing now? In the meantime, we also talk about his family background, school life, and more details.

Check it all out!

How old is Thomas David Black? His Birth Details

He is aged 13 in 2022. Born on 23rd May 2008, in the United States of America, Thomas was weighed in at 6 lbs at the time of his birth. His father was the first who revealed the huge news to Entertainment Tonight, telling the show his newborn was “fresh out of the oven.”

Besides, Jack and his wife came with their pregnancy news in December of 2007.

He Was Named After His Father

In a talk with Today, Jack, fully Thomas Jacob “Jack” Black said that his son Thomas was named after him. He said,

“It’s Thomas. I said we named the baby after me, but I didn’t say that my actual name is Thomas.”

In addition, Black is of English, German, Irish, and Scottish descent from his father’s side. As for his nationality, the star kid is an American and is from a mixed ethnic background.

His parents Jack and Tanya both attended Crossroads School. Following their graduation, it was about 15-year after, the two again met at one of their friends’ birthday. And this time, the duo hit it off instantly. After some time they began dating, Jack and his future wife Tanya also engaged in Jan 2006.

As for their marriage, the duo exchanged their vows in March of the same year. They wed in a low-key ceremony held in Big Sur, Calif.

Grew Up With His Brother

Thomas has an older brother named Samuel Jason Black. He was born a few months after his parents’ nuptials in June 2006 at Cedars-Sinai Medical Center, in Los Angeles.

Both the Black brothers are super closed to each other and also shared the same love of making short movies.

Although Thomas’ dad Jack doesn’t believe in the existence of God, the comedian identifies as nominally Jew. He also decided to raise both of his sons in the Jewish faith. In a 2012 interview with Team Coco, Jack revealed about his kids’ early education. He said that he and his wife were on, “so much stress about where they’re gonna go to school.”

But, eventually, the duo decided to allow their kids to attend a nearby Hebrew school, where the education mostly focus on Jewish history.

His mom Tanya is one of the triplet daughters of Charlie Haden, a late American jazz bassist, and his wife Ellen Haden. Like her, both of her triplets sisters Petra and Rachel are also singers. They came up with their first album named The Haden Triplets, in Feb 2014.

In late 2019, the School of Rock actor opened up something interesting about his relaxed approach to parenting his sons. He told Australian radio duo Fitzy and Wippa on Nova 96.9 that he allows his kids to watch mature content in films and  TV.

Although the comedian has been more in family-friendly projects lately, Jack admitted to allowing his kids to watch mature films too ‘if they’re really begging to see it’.

But, in the meantime, there are also some conditions Black has installed to let his kids see such films. He said there must be their guardian to become aware of what is going on,

“As long as you have the remote in hand so if something gets out of control, you can pause and have a little talk. As long as you’re there and aware of what’s going on and you’re ready to talk to them or ready to leave if it’s too intense.”

Thomas and His Brother Are Super Creative in Making Short Movies

In a 2019 exclusive interview with People, Jack said that his sons are more interested in making short films lately,

“They both have made cool little short films on their iPhones. I [am] so proud and grateful for my family.”

In the same talk with the magazine, Black also said that the actor loves to spend much of his downtime from his workload with his family,

“I love just hanging poolside with the boys, with [wife Tanya Haden] and the boys. A day by the pool, that’s a nice day off.”

Thomas’ Relationship With His Dad

On one hand, Jack is too grateful to have such creative sons and on the other hand, the wild entertainer is a little bit frightened by his youngest son. He told Us Weekly while at the Hollywood premiere of his movie The D Train in 2015,

“My little boy [Thomas] doesn’t love me anymore. But my big boy [Samuel], I’m still doing good with him. But I think it’s going to work out in the end.”

“Sometimes I’m afraid my little one is going to murder me. Sometimes there’s some genuine rage in his eyes. And he told me he’s going to kill me. But I think it’s just a phase.”

In fact, it was long before Thomas turned a teenager. And, as of now, the father-and-son duo seems to have a healthy relationship. Thomas often appears with his father, attending several star-studded events.

In March 2021, Thomas and his dad were also seen, riding on their Super 73 electric bikes in Los Feliz.

What is Thomas David Black Net Worth?

As the son of two successful parents, Thomas definitely lives a lavish lifestyle. However, as far as his net worth is concerned, it is yet to estimate. In the meantime, his father Jack Black has an estimated net worth of $50 million as of 2022. His main source of wealth is his work in movies and TV shows.