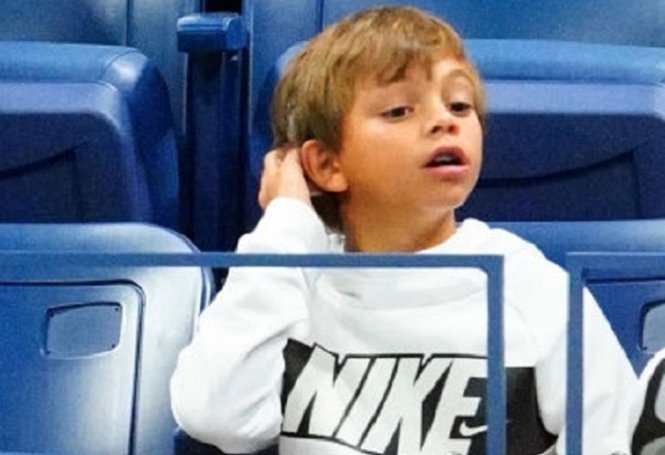 In life, few people are born famous, while others have to work hard to make their dream came true. Here today we are going to talk about one of the popular star kids Charlie Axel Woods who is the son of legendary golfer Tiger Woods and model Elin Nordegren.

Even after their infamous divorce, the two are doing their best to co-parent their two kids. Charlie from an early age also started crafting his golfing prowess under the world’s popular dad Tiger’s coaching.

To know more about his affluent upbringing, parents, siblings, and many other facts read the full article.

Does Charlie Woods Play Golf? His father Tiger Caddies for him on Junior Golf Course

In early 2020, Tiger was seen working as a caddy for his son Charlie during the junior golf event in South Florida. He showcased his best swing with advanced skills on the golf course. The video captured by an onlooker went viral on Twitter.

Imagine strolling up to a junior event … only to see Charlie Woods put on a STRIPE SHOW while Daddy Caddie Tiger looks on pic.twitter.com/T54Y4aCLBr

the kid looks like he could play challenge tour already

After such applauses from social media users, the star kid will definitely try to do his best in golf. Furthermore, in June 2016, Charlie also tied for second in a U.S. Kids Golf Boys 7 event.

Charlie also appeared as a caddy for his father

Woods frequently appears with his dad watching several golf matches together. Besides, both of Tiger’s kids Charlie and Sam were also seen caddying for their daddy during the 2015 Master Par-3 Contest.

Is He Charles or Charlie? The real truth about his Name

“Charles” isn’t his name but it is “Charlie.” Apparently “Charlie” was given in honor of late World Golf Hall of Fame member Charlie Sifford. Tiger considered Sifford as his role model and even called him “Grandpa.”

As per sources, Charlie’s middle name “Axel” has been inspired by his mother Elin’s brother’s name “Axel.” The name is pretty common in Scandinavian countries. His mom was also born in Sweden, so it’s evident where is the name came from.

Charlie was born on 8th Feb 2009, in the United States, to Tiger Woods and Elin Nordegren. He holds an American nationality and belongs to a mixed ethnical background. His old man is one of the greatest golfers of all time who will be corporated into the World Golf Hall of Fame in 2021.

While talking about his mother, Elin is a model and nanny.

Woods and wife Nordegren exchanged their vows in October 204. Their wedding ceremony took place at the Sandy Lane resort in Barbados. The two began dating in the early 2000s after Swedish golfer Jesper Parnevik first introduced them during The Open Championship in 2001.

They dated for over two years before getting engaged in late 2003. Their marriage, however, started falling apart and became the center of the media after Tiger’s infidelity towards Nordegren attracted huge notoriety in 2009. Apparently, several women claimed their intimate relationship with Tiger. Their divorce proceedings came to an end in August 2010.

Charlie Axel Woods has a sister

Woods has an older sister named Sam Alexis Woods on 18th June 2007, the day after Father’s Day. Her name “Sam” was given as a tribute to Tiger’s late dad Earl Woods who told him “Sam” since the day he was born.

Following their divorce finalization, the couple agreed to share joint custody of their two kids. So Charlie and his sister Sam have a close connection with both dad and mom. Elin told People magazine appreciating Tiger’s great role as a father,

My relationship with Tiger is centered around our children and we are doing really good — we really are — and I am so happy that is the case. He is a great father

Although their bitter divorce, the two seem on good terms as of now doing a pretty good job in co-parenting.

Charlie also has a step-brother

His mother Elin Nordegren is now in a committed relationship with NFL player Jordan Cameron. Charlie became the step-brother when the couple welcomed their baby boy, Arthur Nordegren Cameron in October 2019.

His relationship with Tiger’s new girlfriend

Tiger is currently in a relationship with Erica Herman who managed his pop-up restaurant. The couple has been dating since late 2017. Talking about her relationship with Tiger’s two kids, they are still living happily together. They also attend several golf matches and many other major events together.

Charlie loves puppies. He has appeared several times playing with his daddy’s three pooches. Tiger spends his spare time with his canines entertaining two kids along with also.

Is a Soccer Lover

Besides Charlie’s often impressive golfing stints, he also seemed to have a passion for a few other team-oriented sports. Both of Tiger’s kids Charlie and Sam are avid soccer lovers. The golfer told Golf.com,

They’re keen into soccer. If they want to play golf, that’s great. If they don’t, that’s fine, too. As long as they have a good time playing sports

Tiger has collected a tremendous amount of money from his successful golfing career. His net worth stands at $800 million. On the other side, his now ex-wife Nordegren has $200 million. She also received $100 million as a divorce settlement. His dad has a mansion on Florida’s Jupiter Island that worth $48.09 million.

It boasts several solid bedrooms and bathrooms. The oceanfront property also has a 100ft swimming pool, a golf course, and a tennis court.

Born in Cypress, California, Tiger is the only child of his parents. He has three half-siblings from his father’s previous marriage, two brothers Earl Jr. and Kevin, as well as a sister Royce.

He began his golfing career very early and became the youngest U.S. Junior Amateur champion too at 15 while was a student at Western High School in Anaheim.