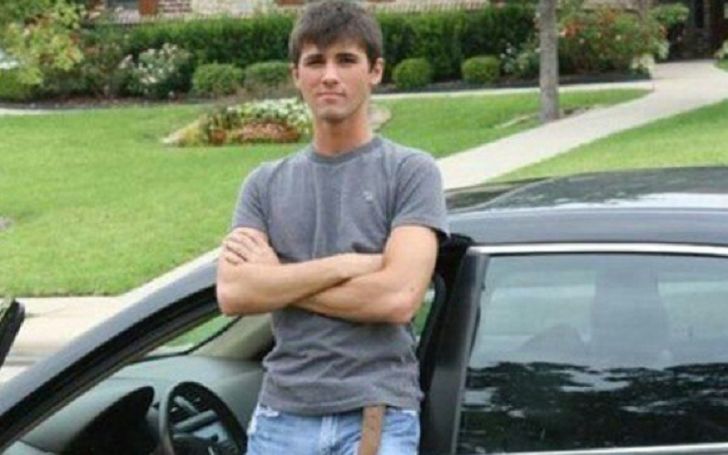 Similarly, Billy’s kids also have fantastic careers in their respective fields. Trace, Brandi, and Noah are all accomplished artists. However, at the same time, there is one kid, Christopher Cody (aka Christopher Cody Cyrus) who has remained totally out of the public radar.

Well, let’s know more about him and find out about his family, his current whereabouts, and more.

Christopher Cody Shares The Same Birth Year With His Half-sister Miley Cyrus: Who Is His Mother?

His mother is Kristin Luckey who was once a waitress in South Carolina. As for his date of birth, Christopher was born on 8th April 1992, in Myrtle Beach, South Carolina. And his age as of 2022 is 30.

Besides, at the same time, Billy Cyrus was also in a relationship with Leticia “Tish” Finley, an actress and producer. He welcomed a daughter, Miley Cyrus with Leticia, seven months after Cody’s birth on November 23, 1992.

After knowing that Billy was also expecting a child with another woman, Christopher’s mother Kristin was completely devastated. In an interview, the waitress recalled her utter heartbreak,

“He went on TV and announced that he had a beautiful baby boy and another baby on the way. And that’s how I found out about Tish being pregnant with Miley. My jaw just dropped. There was a lot of anger in me but we kept talking. Then Billy Ray went on TV and said he and Tish were getting married and she was pregnant again.”

Since then, Chris’s relationship with the Cyrus family, especially with his father became estranged.

Christopher was clearly disappointed after the Cyrus family kept him out of the family reality show. But moving toward his relationship with Miley Cyrus, Chris loves and admires his half-sister, Cyrus. Despite that, the half-siblings rarely met each other for the past decade.

Miley once said, “My priorities are my friends and my family,” referring to her father Billy Ray, mother Tish, and siblings. The wrecking ball hitmaker is yet to talk about her older half-brother Chris publically.

They met last time at a Miley concert near Cody’s home in Fort Worth, in November 2007. He recalled the moment,

“While she was on stage I was watching her from the sidelines. Afterwards we spent 20 minutes in her bus. Her voice is fantastic and I’m very proud of my sister.”

Christopher Had a Part-time Job in an Electronic Store

Following the split of his parents, Cody did a lot of odd jobs to put food on the table. He used to work at a store and was paid $7.50 (£5.50) an hour. He recalled the moment,

On the other side, his sister Miley was making a huge from her music career and many other endeavors. In 2020, the pop artist collected £37 million from her tours.

Although they are worlds apart, Christopher is always happy when he talks about his sister. Several years ago, he said,

“She doesn’t play the superstar in private. She’s a normal teenager having fun and she can laugh at herself.”

“She’s the same now as she was before all this fame. She’s still my goofy sister. Miley is not a self-obsessed person at all. She’s just trying to have fun while working hard and I don’t know anyone who dislikes her.”

Christopher always wanted to get close to his father and the rest of the Cyrus family. In spite of his effort, his father never really acknowledged his efforts.

Once, Billy Ray gifted a recording studio to his daughter Miley on the occasion of her 16th birthday. But, Christopher never got a single phone call from his dad on his birthday.

Furthermore, he read out the text messages between him and his dad on 2008 Christmas Day. It began with Chris, texting, “Merry Christmas.”

Billy responded to the message, a few days later, on 4th January, saying, “Hey bud, where you been? You disappeared on us.”

Christopher replied, “I disappeared? You disappeared. I tried to get a hold of you.”

He Has a Half-sister From His Mother’s Relationship

His mom Kristin Luckey, after her relationship ended with Billy Cyrus, moved on with Mark Sorine (Chris’ stepdad). They later got married and now also have a daughter named Ali.

His mom currently resides in a suburb of Fort Worth, Texas. Christopher shares a deep bond with all of them.

His College: Is a University of Texas Law of School Graduate

Cody went to the University of Texas School of Law in 2014 and obtained his Juris Doctor (J.D.) from the college in 2017.

What is Christopher Cody Doing Now? Is a Litigation Associate at Baker Botts

Although Cody hasn’t followed in any of his family’s footsteps, the star kid is pretty successful in his own way. He currently serves as a Litigation Associate at Baker Botts. He joined the office in Sep 2019.

Christopher did his legal and judicial internship at EEOC and U.S. District Courts respectively. Chris then worked as an editor at Texas Law review. He later joined the United States District Court for the Southern District of Texas as a judicial law clerk. He worked there for a couple of years (August 2017-18).

Is Christopher Cody Married? Who is His Wife?

Cody has been in a serious relationship with a mystery woman for a long time now. While several sources reported the couple also got married but none of them hasn’t confirmed the speculations to date.

On the other side, Christopher has posted a number of photos with two little girls on his social media. Neither Cody nor his rumored wife has made any confirmation whether they are their own daughters or not.

He currently resides in Fort Worth, Texas with his family.

What is Christopher Cody’s Net Worth?

Furthermore, his superstar half-sister Miley Cyrus’ estimated fortune is $160 million. She has racked the majority of her money from her music and acting gigs.

He is the son of Billy Ray Cyrus and Kristin. He has five other half-siblings excluding Miley. His dad secretly tied the knot with his second wife, Leticia “Tish” Finley in December 1993. The couple has three biological children, a daughter Miley Ray, a son, Braison Chance, born in 1994, and a daughter, Noah Lindsey Cyrus, born in 2000.

Braison is an actor and composer. Besides, Noah is a singer and songwriter, who also has a great career as an actress. Furthermore, Billy Ray adopted two young children; a daughter Brandi and a son Trace from his wife Finley’s previous relationship. Both of them are singers.