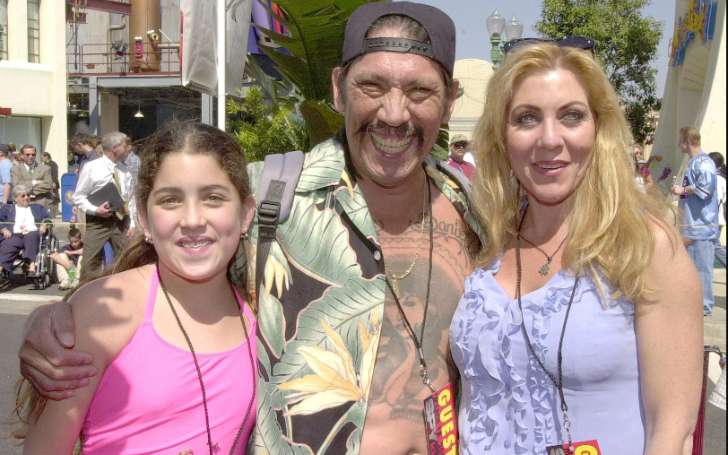 Danielle Trejo is an actress known for her work in the movies like Strike One (2014), Bullet (2014), and 1st Strike (2016). More than her profession as an actress, she is most recognized as the daughter of an American actor Danny Trejo who is famous for his character ‘Machete’ in the movies Spy Kids, Spy Kids 2: The Island of Lost Dreams, and Spy Kids 3-D: Game Over.

Talking about her father Danny is one of the most celebrated American actors of Mexican descent. Despite having a difficult childhood, he became successful in marking his name in Hollywood by doing more than 300 movies and series like Desperado, Heat, From Dusk Till Dawn, and several others. So, being grown up seeing her father playing different characters, Danielle also chose to become an actress. And by following in her dad’s footsteps, she also did some movies that starred her dad Danny.

Well, let’s get to know the movies in which Danielle acted. Further, this article is also intending to talk about every life detail of Danny Trejo’s daughter, Danielle Trejo along with her age, social media account, net worth, and many more.

Danielle was born ‘Danielle Reyna Trejo’ to her parents Danny Trejo and Maeve Crommie on June 14, 1990, in Los Angeles County, California, United States. As of 2022, she is 32 years of age and holds a birth sign Gemini.

Similarly, she was raised in her hometown alongside her siblings. Likewise, talking about her nationality, she is an American citizen and belongs to the Mexican-American ethnicity.

Danielle’s Siblings: One of Them Is A Writer & Producer

Danielle is not the only child of her parents. She has a biological brother named Gilbert Trejo who was born on March 8, 1988, and is 34 years of age in 2022. He is a writer, producer, and director by profession who is known for Machete (2010), From a Son, and Skinny Dip. He wrote and produced the 2019 thriller movie Black Licorice which star cast Danny Trejo.

Further, she has a half-sibling named Danny Boy Trejo from her father’s relationship with Dianna Walton. Danny Boy was born in 1981. She also has other two half-siblings named Esmeralda Trejo and Jose Trejo whose information is not available in the media.

If you go and search for Danielle Trejo’s mother, most of the websites have written Debbie Shreve as her biological mom. But, we have found out that, Danielle’s real mother is Maeve Crommie with whom her father Danny was in a relationship from 1986 to 1997 while Debbie came into her father’s life in 1997 as his wife.

Further, On October 13, 2021, Danny also mentioned Maeve as the mother of children on his Instagram. He wrote,

Happy birthday to Maeve! The beautiful mother of my beautiful children!

Danny’s relationship and marital history are quite interesting. In his lifetime, he experienced romance with multiple women but he married only 3 among them. His first wife’s name is Laura whom he met while he was in California’s juvenile prison. Then, in 1975, he tied the knot with a lady named Joanne.

After 3 years, the couple separated, and later in 1997, he shared a vow with Debbie Shreve. In 2022, he is no longer together with Debbie as the couple got divorced in 2009.

In the year 2002, Danny’s daughter, Danielle at the age of 12 debuted in acting. She made her first appearance in the role of a granddaughter in the short movie named Simplicity, in which her father starred as a small Colombian town barber.

Following her debut, it took 10 years for her to do the next movie. Eventually, in 2012, she was seen in the movie Amelia’s 25th alongside her father and Electra Avellan, Margaret Cho, and James Duval.

Likewise, in 2014 she appeared in Strike One portraying the character Manny’s Entourage. Then, she did a short project Frankie Teardrop and the film 1st Strike, both in the year 2016. After this, she hasn’t done any other film projects. Besides acting, she has also worked as a customer in the 2014 film Bullet. She also served as a production assistant in Video Bad Ass 2: Bad Asses. Further, she was also featured in the Documentary titled Inmate # 1: The Rise of Danny Trejo.

Is Danielle Trejo Married? Who Is Her Husband?

Danny’s beautiful daughter is now 32 years of age. So, it is obvious for Danielle is to start her own family. With this concern, when we tried to trace her personal life, we came by with an empty hand. Danielle despite being a public figure, is absolutely living a low-key life. Besides her profession, she has managed to cover up her personal life from the media world.

As a result, we are unable to say whether Trejo is married or not. She has not left any sign of being married or her relationship status in the media. So, until and unless, she herself opens up about her family life, it is safe to say that till today she is unmarried.

Moving on to her presence on social networking sites, at present, she seems to be a little bit private. But, back in 2015, she used to use her official Instagram account under the username @danielle_reyna which is unavailable now. She also does not seem to have an account on Facebook as well as Twitter.

But, on the other side, her famous father Danny Trejo is hugely active on social media handles. He has his Instagram under the username @officialdannytrejo with 2.2 million followers. He is also on Facebook, Twitter and TikTok.

Net Worth: How Rich Is Danielle Trejo?

As per several media portals, Danielle’s estimated net worth is around $1.6 million. Her income source is prominently her work in several movies. On the other side, her beloved and famous daddy Danny Trejo has a fortune of $8 million as of 2022.