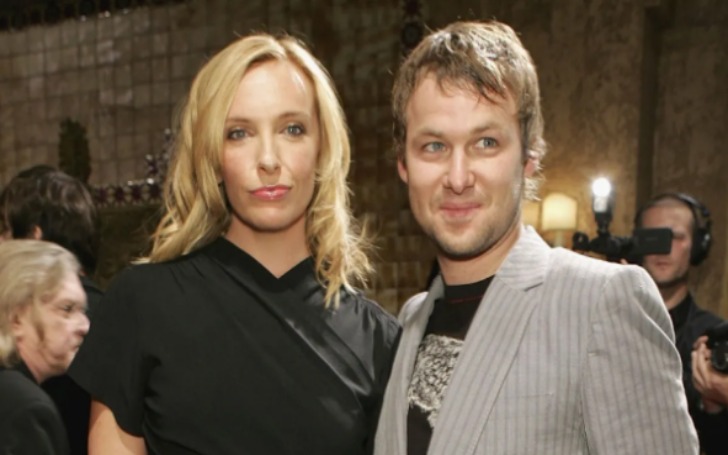 Dave Galafassi is a renowned Australian actor and professional drummer. Apart from that, he is widely known as a celebrity spouse who rose to prominence after he tied the knot with the Australian actress Toni Collette. Dave is also a drummer at his band named “Finish” where his wife is the lead vocalist.

Talking about their relationship, they have been together for more than two decades. However, Dave doesn’t open up easily in front of the media. So, how did the duo first meet? Moreover, do you know Dave once got in a dangerous accident? So, how did he survive?

We often get to hear that Dave is walking in his wife’s shadow. Have Toni’s professional career affected her and Dave’s marital relationship? Well in this article you will find everything regarding Dave Galafassi including his personal life, career, net worth, and many more.

Born in 1978, Dave Galafassi is 44 years old as of 2022. He was born in Port Macquarie, New South Wales. Dave is quite secretive about his life which is why he has not revealed much about his family. Moreover, he has not mentioned his siblings yet.

Talking about his wife Toni was born on November 1st, 1972 in Sydney, Australia. She was born to her parents Bob Collette and Norma. Toni grew up in a normal household and her father was a truck driver.

Dave Galafassi is an actor and a drummer. He made his debut in the acting industry in 2013 in a movie named Lucky Them. After that, he did not make many efforts to continue his acting career.

Moreover, he is widely known as a drummer. He was into music from his early childhood and started his career by working in different clubs and restaurants as a drummer. Later, he became the drummer for the band name “Gelbison”. Soon, he started gaining fame as a band member.

Later, in 2006 Dave left the band. After that, he along with his wife formed a band named “The Finish” where Dave was the drummer and his wife was the lead singer. Their band was able to create some hit albums and they were also able to reach the 8th position on the AIR Indie Distro Albums Chart.

Dave Rose to Fame Because of His Wife Toni Collette

Despite being a media personality himself, he is mostly known because of his star wife, Toni. Dave worked as an actor and drummer but his wife was successful to survive longer in the entertainment industry. Moreover, she was able to gain more fame from the media than her husband.

Dave’s wife Toni Collette is a multiple award-winning Australian actress. She is widely known for her role in the movie The Sixth Sense (1999). She first started her career in 1990 by making a guest appearance in a drama series named Seven Network: A Country Practice. Later, she started getting many opportunities and was able to be one of the most popular Australian actresses.

The beautiful star couple tied the knot on January 12, 2003, in the presence of their friends and family. They exchanged the vows at Broughton, Berry in Toni’s house. At their nuptials, there were spectacular fireworks along with vegetarian banquets. They followed the Buddhist marital rituals which went on for a week.

Toni following the traditions, wore a beautiful gown inspired by Collette Dinnigan with a long veil while the aisle was filled with rose petals and the guests held the flowers.

There were 80 guests at the wedding including some famous names like filmmakers Nash Edgerton and actor Kick Gurry. Since then their bond is getting stronger and calling them the most romantic and loving couple wouldn’t be an understatement.

They first came across each other in 2002 at a restaurant in Sydney while he was performing as a drummer for his band Gelbison. At that time, Dave was an up-and-coming drummer. After that, they again met each other at a barbeque party.

According to Toni, she was already impressed with Dave and when he kissed her cheek, she melted right away. She further added,

“He kissed me on the cheek and I just kind of melted,’ I only wanted to drop in on the party for ten minutes but ended up staying for 12 hours”

Their meetings slowly started flourishing and soon they started dating and the rest is history.

Do They Have Kids Together?

The duo is the parents of two beautiful kids. Dave and Toni welcomed their first kid on January 9, 2008, in Sydney. They named their daughter Sage Florence Galafassi.

The Secret Behind Their Successful Marriage

Toni reveals that she feels very lucky to be with her husband Dave. The couple has shown the world that the secret behind a successful marriage is understanding and support towards each other. Despite people sometimes mocking him for walking in his wife’s shadow he has always been supportive of her.

As we all know that he was a drummer while his wife was a lead singer in the same band. Many people fallaciously take Dave as being under his wife’s shadow. However, Dave has always been calm and supportive towards his wife and has not reacted much to this topic.

Furthermore, as per one of the articles from Dailymail, Toni also revealed that her husband has watched all the sex scenes from her work and he has always been professional about it. She also mentioned that he complimented her saying that one of the sex-scene was her best work on screen.

Dave once Encountered a Dreadful Accident

In 2019, Toni revealed that her husband Dave had a dangerous accident during Christmas. His wife shared a picture with six emergency vehicles on her social media where she explained that her husband is recovering from a serious motorbike accident. Thankfully, the medical team was able to save his life and he recovered from his injuries.

She also thanked the New South Wales Ambulance and the Toll Rescue Helicopter for saving her husband’s life through her social media handle. She also mentioned that, without their help, it wasn’t possible to save Dave’s life.

Is Dave Available on Social Platforms?

What is Dave Galafassi’s Net Worth?