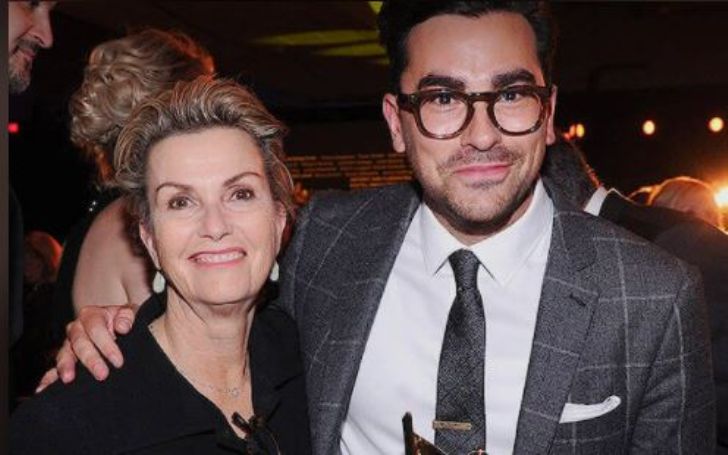 Deborah Divine is a screenwriter, production manager, and producer. She though is better known as the wife of Eugene Levy, the actor from the fame of franchise, American Pie. Together, Eugene and his spouse, Divine who have been married to each other for over four decades are parents to two, Sarah Levy, and Dan Levy.

Divine’s partner, recently was in the talks for portraying Johny Rose in the beloved Canadian-made sitcom and global Netflix hit Schitt’s Creek, starring Tim Rozon and Catherine O’Hara. The Hamilton-born actor’s wife, Ms. Eugene might be on the sidelines, but one could argue without her, the show wouldn’t have been possible.

She, to some extent, is the unsung heroism of wife-dom and motherhood. Some could also say Divine’s contributions to show business are understated. She may not be famous or recognizable as her husband or her son, but she’s still in the same industry contributing almost equally.

What’s more, Deborah is also a capable producer and occasionally hilarious Twitter woman, though she is the less talked member of the Eugene family. Know more about her in the piece below; her history, the life prior to meeting her bushy brow husband, their relationship, and so forth.

Deborah Divine Is The Daughter Of A Singer

While not much about her father is known, her mother Patricia was a singer who used to sing in the Royal Conservatory during the ’40s. She was also a student of Ernesto Vinci’s opera program.

What Does Deborah Divine Do For A Living?

Mostly a writer, the longtime wife of Eugene, Deborah is known for scripting the series, Maniac Mansion, a 1990s Canadian-American sitcom that her husband, Eugene created.

It ran on channels, Family Channel and YTV from 1990 to 1993. She additionally is a producer for various TV series, including Another World and Higgins Boys and Gruber.

The Canadian-born writer has also had notable contributions to the American soap operas Search for Tomorrow, Another World, and Sunrise Bay.

Her credits also include the short-lived sketch show The Higgins Boys and Gruber. She, in addition, has worked behind the scenes in the film, The Edge of Night. Also while she didn’t appear in any of Schitt’s Creek’s episodes, Divine did serve as the show’s creative consultant.

Although they have been husband and wife for over 40 years, neither of the couples has revealed too much about their early relationship. What’s known, however, is they did have some difficulties while solidifying their union.

Since Deborah was a protestant and her then-fiance, a Jewish, at the time, no religious minister easily agreed to marry such interfaith couples.

They nonetheless got a rabbi named, Abraham Feinberg as the one who would eventually officiate their marriage. Of her marriage to the Emmy-winning actor, Divine says the best thing that she ever did for her Protestant family was marry a Jewish man.

The couple allegedly started dating back in 1973. At the time, Eugene was starting out in the Second City Toronto cast. He had also been in two films, Foxy Lady and Cannibal Girls. Amidst the same time, he also had had a brief fling with Schitt’s Creek costar, Catherine O’Hara. Four years later, Divine and the American Pie star would tie the knot in 1977, reportedly in front of 300 guests.

Six years after their marriage, Deborah and her husband welcomed their first child, Dan Levy. The writer and the show creator couple had their second child, a daughter, Sarah Levy, in 1986.

Divine and her husband named their son Dan Levy after the 1973 Elton John song Daniel. The two children of the singer’s daughter and the Grammy winner now have fairly successful careers.

They both are actors with the son being the more famous one. On Schitt’s Creek, Deborah’s husband and son, Dan carried on with their real-life relationship of father and son.

As for her daughter, Sara Levy, she is known for appearing in films, SurrealEs, Cheaper By The Dozen 2, and The Surrealtor. Sara also starred in Schitt’s Creek as Twyla Sands, the Cafe Tropical owner.

Though their mother, Deborah has spent many years working behind a handful of Tv projects, she says being devoted to her children and supporting them in all things was her number one job.

Deborah And Her Husband Were Strict To Their Kids

In Jan 2019, while talking to People, the Levy couple jointly stated they were quite strict parents with their kids Dan and Sarah. Divine and her husband explained their tight ship was to make sure the two future Schitt’s Creek actors stayed out of trouble.

They also wanted to make sure Dan and Sarah learned the value of discipline. They additionally didn’t want them to dive into a show-business environment. The couple claims the firm environment worked for their offspring in the long run. Though except for their goals of not wanting their kids to be actors.

She Supported Her Son During His Coming Out

While Mrs. Levy and her spouse raised their son and daughter in tough surroundings, the former was also the one who turned out to be an important person when her son came out as gay.

As such when talking to Marc Maron in the WTF podcast in May 2020, Dan recalled it was his mom, Deborah, who comforted him and made things much easier.

“We were having lunch and she just asked and I said ‘yes,’” Dan reported to Maron.

He added – after that, his mother was really great about it and asked if he wanted her to tell his dad to which he ‘yes.’ The Jr. Levy was then still a teenager.

Following the conversation with her son, the screenwriter told her husband. Next, Eugene told his son he loved him and that it didn’t change anything. Dan admits he has been openly gay since he was 18.

Deborah Divine Also Hit Back At Her Son’s Bullies

In Feb 2021 with less than 24 hours till Divine’s son, Dan was going to host Saturday Night Live, the actor and producer’s mother celebrated him online in the most endearing way.

Specifically, Deborah took to Twitter to call out her son’s childhood camping bullies who used to make his life miserable.

“This goes out to the bully punks at Camp WTF who made life miserable for a certain cabin-mate back in the summer of ’96 – just because he was different. Well, after all these years I have just 7 words to say to you: “Live from New York, it’s Saturday Night!”

tweeted the mother of two.

How Rich Is Her Husband, Eugene Levy?

Mrs. Divine’s spouse, Eugene Levy while not among the massive earners or the one with the huge wealth (in Hollywood) is still a multimillion-dollar entertainer.

Active since the late’60s, he has currently a net worth of over $30 million. If nothing else, the figure surely does rank him on the list of rich veteran actors.

Who is Lisa Meyers? Is a Long-Time Kris Kristofferson’s Wife