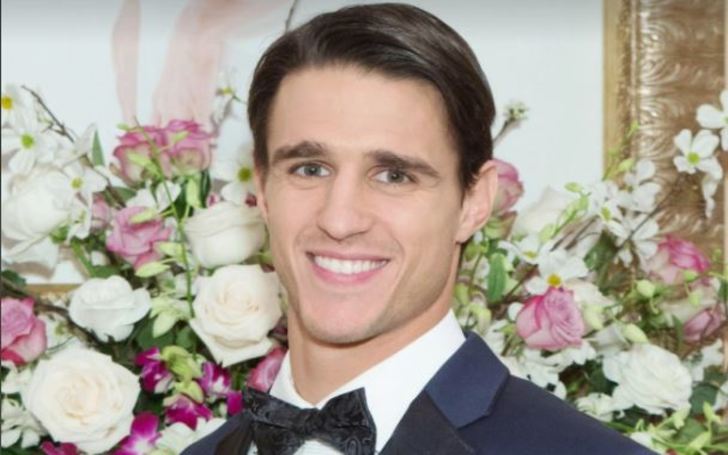 Joe Locicero is an actor and mixed martial artist who is better known as the husband of the Jane The Virgin actress, Gina Rodriguez. He’s appeared in a number of films and TV shows, including Jane the Virgin, Miss Bala, and Someone Great. All three of which also starred his wife.

In recent years, he got recognition for himself playing Vincent “Vinny” Walker on the soap opera The Bold and the Beautiful.

Gina Rodriguez became a household face for the American audience in the last decade, however, her personal life’s the one that has often gotten eclipsed. Know who is her husband in fullest detail. Was he in Hollywood earlier than his famous wife? How come he ended up marrying Rodriguez? Does he have children with his wife?

Joe Locicero Is A New Yorker

Joe was born on August 9, 1986 (age 35 years) in Long Island, New York. The actor hasn’t revealed much about his heritage or parents. He once on his Instagram insinuated that his great grandfather immigrated to the US but didn’t reveal from where or when. Locicero though is very much assumed to be of Puerto Rican descent.

There are speculations that he might be an Italian. This stemmed from the fact that he once voiced Luca Vincenzo Cocchiola, an Italian character in the video game, Battlefield 1. Though, Locicero is yet to disclose his true lineage.

Rodriguez’s husband, Locicero made his acting debut in 2013 when he featured alongside Eric Frentzel and Kiyomi McCloskey in the short film, Hector: Lost Souls with Switchblades. Later that year, Joe appeared in the TV documentary, A Crime to Remember.

In 2014, he got a recurring role in Tyler Jolley’s Karaoke the Movie. The following year, the Boricua appeared in the comedy short Crossword Puzzle Brahs. In 2016, Joe made his cinematic debut in the comedy Spaghettiman. The same year, he also starred in The Perfect Pitch, and Welcome to Willits.

A year later, Joe made an appearance in Jane the Virgin alongside his future wife.

In 2018, Joe co-wrote, the film, Cop Chronicles: Loose Cannons: The Legend of the Haj-Mirage. The next year, Rodriguez’s partner of 8 years shared the screen with his wife in the indie films, Someone Great and Miss Bala.

As of 2021, Joe is set to appear in Karate City and, I Lost My Phone. He is also known for playing the role of Vincent Walker in The Bold and the Beautiful.

In addition to acting, LoCicero is an amateur mixed martial arts fighter. His wife says she is very proud of her husband’s fighting career.

Rodriguez’s partner is proficient in Muay Thai. In fact, he is currently the Middleweight California Amateur Muay Thai champion. On winning the championship, he, through his Instagram, revealed he didn’t want to turn 30 without a #muaythai belt.

He additionally mentioned how his trainer, Ryan Rahimpour, gave him 5 of the most fun, creative, and toughest rounds of his 20 years of Martial arts.

How Did Joe Meet His Wife, Gina Rodriguez?

The six-foot-one inches tall LoCicero met his future wife, Gina Rodriguez on the set of Jane The Virgin in 2016. The show had first cast Joe as a Don Quixote-impersonating stripper in 2016, chapter 39. He would go on to appear four more times in the series.

The two, however, didn’t immediately kick off their relationship.

“I met him six months later at a boxing gym after we shot together,”

Rodriguez explained while on The Tonight Show Starring Jimmy Fallon. She said it was the boxing gym that brought them together.

But the New York University graduate still credits her career-defining show for introducing her to Joe. She said she feels very lucky and that Jane gave her a lot of things. She added to her, the series not only was an amazing life and a dream come true, but it also gave her the love of her life.

The first appeared together in front of the public at the SAG awards in Jan 2017.

Joe Locicero And Gina Kept Their Engagement Secret For A While

After two years of dating, Joe and his partner, Gina got engaged in 2018. Talking about her engagement with People, Locicero’s fiance revealed they purposely waited a month to announce it officially.

The Kajillionaire actress said she didn’t even really want to say it was happening. She further admitted that she just wanted to live but thought it was a huge blessing in the fact that people cared. The couple kept it to themselves for a while until Joe posted an Instagram photo of the couple vacationing in Thailand. As for Gina, she first announced the betrothment in Aug 2018 flashing her engagement ring through a series of pictures on her Instagram.

The fiancee told ET that her fighter/actor partner picked the perfect ring.

Joe And Gina Weren’t Going Have A Normal Wedding

Locicero and his fiancee, Rodriguez tied the knot on May 4th, 2019.

Though, the Chicago-born actress, in an interview, admitted she and her partner came close to eloping a few months earlier. Rodriguez explained the decision came in the spur of the moment when she fell in love with her Golden Globe dress.

While the couple didn’t share too many details about their wedding, they aired brief footage from their big day.
Their wedding took place the same year as Jane the Virgin met its final season. Coincidently, the on-screen marriage overlapped with the preparation of the titular character’s real-life wedding.

Rodriguez told Access Hollywood that shooting the finale of Jane the Virgin was kind of insanity and way too much because she was also preparing for her real wedding and of Jane’s.

The Illinois star announced her marriage to Joe via an Instagram video posted on 4th May 2019. In the caption, Rodriguez wrote; “May 4th, 2019 was absolute MAGIC. To my husband Joseph, I am yours forever.”

Locicero and Gina initially had a courtroom wedding, but the couple’s families later talked them into having a conventional wedding. Gina’s co-stars from Jane the Virgin were among the attendees.

While LoCicero and Rodriguez are yet to have kids, it is something that the former’s wife definitely wants.

As such the Annihilation star once revealed how much she thinks about a lot of children needing homes. She explained it is another thing that Locicero and she, herself had been discussing for a while. Gina ruled she does want a family. Joe’s partner said she, however, is unsure if she would have a biological one as she admitted she is a bit old for that.

She had also shared the same sentiment with Ellen DeGeneres where she confessed she “definitely want to adopt.”

Who Is Richer; Joe Locicero Or Gina Rodriguez?

Although the husband and the wife are both in the same profession, the former has been a more notable face over the last seven years or so.

Gina also has more accolades and quite the reach as an actress. Additionally, the Golden Globe-winning actress gets more gigs per year than her significant other. Amidst the show’s popularity, Locicero’s wife was reportedly taking anywhere in the range of $60,000 to $100,000 per episode. And she is also clearly a millionaire.

On the other hand, it’s still a matter of he said she said when it comes to even the roughest quotation of Joe’s career earnings. Whatever the case, among the two, Rodriguez easily seems to be the bigger breadwinner.

Other Facts About Joe Locicero

Also Read Who Is Elias Janssen, the actor who played little Mateo, the son of Jane in Jane The Virgin.