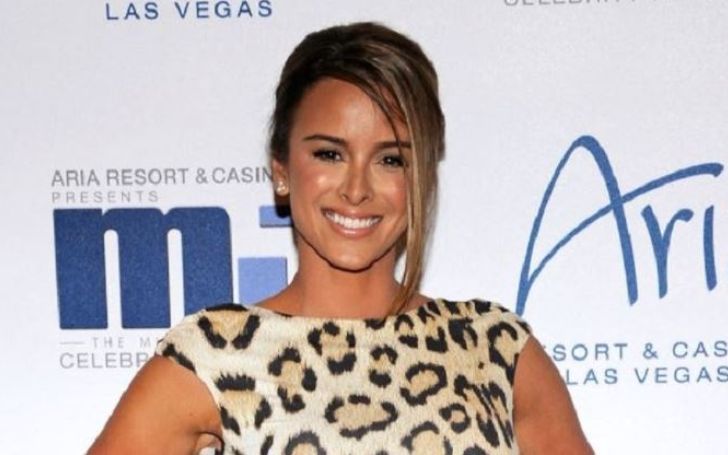 43-year-old Yvette Prieto is a Cuban-American model who is known as the wife of NBA legend Michael Jeffrey Jordan. He is a six-time NBA championship winner with the Chicago Bulls (1984-1998).

As Jordan has managed to establish a name for himself as the GOAT in the basketball world, Prieto is no less. Yvette is well known for working with big brands and designers like Alexander Wang.

Similarly, Yvette is also popular for the 2011 film Cuba: An Island Apart. Here we will discuss more of her personal life, children, and family. Also, stay with us to know more about Yvette Prieto and Michael Jordan’s extravagant wedding ceremony.

Yvette Prieto Holds Dual-Nationality- How Old Is She Now?

She holds dual nationality- Cuban and American and has mixed ethnic descent. She grew up in Miami, Florida alongside her brother named Carlos. Prieto enrolled at the University of Florida and graduated with a degree in business management.

Prior to making her debut as a model, Yvette Prieto worked for a few companies including her parents’ company, and at a hospital. She also worked as a manager at Beet the LBS and at the property management firm Aqua Management.

After working in different companies for a while, Yvette decided to step into the showbiz industry. Over the course of time, she has worked with several renowned brands and designers.

Yvette is best known for working with the American designer Alexander Wang. He is popular for his urban-inspired designs and use of black. Moreover, Wang was the creative director at Balenciaga from 2012 to 2015.

Apart from this, Yvette is also popular for appearing in the 2011 documentary Cuban TV series Cuba: An Island Apart.

The parents of the two Yvette and her boyfriend-turned-husband Michael first met at a nightclub’s dance floor in Miami back in 2008. The pair hit it off shortly after their first meeting and moved in together just a year later in 2009.

After dating for about three years, Michael proposed to Yvette on Christmas Eve in 2011 while they were vacationing in Monaco. Jordan proposed to the love of his life with a giant emerald-cut diamond ring whose value is estimated at around $1 million.

They confirmed the good news via Jordan’s representatives and celebrated their new milestone on the French Riviera.

The lovely couple exchanged their wedding vows during a lavish wedding ceremony on 27 April 2013. They married at Bethesda-by-the-Sea Episcopal Church. It is the same place where former US President Donald Trump and his third wife Melania Trump married.

Not to forget, the couple set a record on their big day with their 40,000-square-foot tent. Many considered it as ‘the largest tent in wedding history.

Over 300 guests including A-listers like Tiger Woods, Scottie Pippen, former NBA analyst Ahmad Rashad, and several others attended the ceremony.

In a similar way, Usher and Robin Thicke attended their Palm Beach springtime wedding. Robin Thicke even performed for everyone at the reception.

After having an extensive lavish marriage ceremony, the then-newly-wed couple donated all the flowers used for decorations on their wedding day to the Jupiter Medical Center.

In a similar way, instead of wedding gifts, Michael and Yvette asked their guests to make donations to the James R. Jordan Foundation.

Yvette Prieto & Michael Signed A Prenup Before Walking Down The Aisle

Just a month before their big day, the NBA legend had his then-fiancee Yvette sign a prenuptial agreement. He signed the prenup in order to protect nearly all of his hard-earned fortune if they were to part ways.

According to reports revealed by DailyMail, Prieto will receive $1 million for every year they were married if they get a divorce.

Likewise, if the marriage lasts for 10 years and somehow ends, Yvette will receive $5 million per year for every year they were together.

Why Did Michael Jordan Ask For A Prenup With Wife Yvette Prieto?

Jordan’s reason for the prenuptial agreement is due to his previous divorce settlement. Before marrying Yvette, Michael married Juanita Vanoy from 2nd September 1989 to 29th December 2006.

As Michael and his former wife Juanita had not signed a prenup, she walked away with a whopping $168 million divorce alimony when the couple parted ways. The amount was equivalent to $226 million in 2021.

She also took their shared Chicago mansion along with the custody of their three children, Jeffrey, Marcus, and Jasmine. This divorce is recorded as one of the most expensive celebrity divorces of all time.

According to Forbes, Michael Jordan is currently worth around $1.7 billion as of 2023. He amassed his fortune from his successful career as well as his partnership with brands like Nike, Hanes, and Gatorade.

Though the twins are eight years old as of now. They are rarely seen in public. Like many celebrity parents, Yvette and Michael have limited their children’s media appearances.

As per the report, Jeffrey also played college basketball while attending the University of Illinois. He later transferred to the University of Central Florida. He currently lives in Portland and works for the Jordan brand in digital innovation.

As for Michael’s second child, Marcus attended the University of Central Florida and graduated with a hospitality management degree. He is the CEO and founder of an elevated retail boutique called The Trophy Room.

As for Jasmine, she currently works as an executive for Nike Jordan Brand. She and Rakeem Christmas are together. They welcomed their son Rakeem Michael Christmas in May 2019.

Does Michael Jordan Have A Love Child With His Secret Lover?

Jordan’s former girlfriend Karla Knafel filed a lawsuit against him in 2006. She claimed that he was the father of her child. As per Karla, Michael had allegedly paid her $250,000 to keep their relationship secret.

She also said that he promised her to pay $5 million for remaining silent and not filing a paternity suit after she got pregnant in 1991.

A judge in Cook County, Illinois determined that Michael did not owe Karla a single penny. In addition, the DNA test results proved that Jordan was not the father of the child.

Similarly, back in 2013, a woman named Pamela Smith filed a paternity suit against the basketball legend claiming they have a secret love child together. The son, Taj, also uploaded a YouTube video talking about how he is the son of Michael Jordan.

Moreover, Jordan is also rumored to be the father of the NBA star Jimmy Butler. As Jimmy was born in 1989 and has a similar game style and physic, many fans and NBA followers speculated that he was undoubtedly the son of GOAT Michael Jordan.

What Is Model Yvette Prieto’s Net Worth In 2023?

The 43-year-old model is reportedly worth around $50 million in 2023. She earns most of her wealth from her modeling as well as her businesses.

On the other hand, her husband Michael has a net worth of $1.7 billion. He is the owner of the Charlotte Hornets NBA team, earns around $80 million per year with Nike royalty, and around $100 million from other business ventures.

As of now, Yvette resides in a 28,000-square-foot mansion in Jupiter, Florida which sits on the 3 acres of land. The mansion features 11 bedrooms, a basketball court, a pool house, a two-story guard house, and many more.

The house is currently worth around $20 million. The couple also owns several other properties in Charlotte, Salt Lake City, and Chicago.