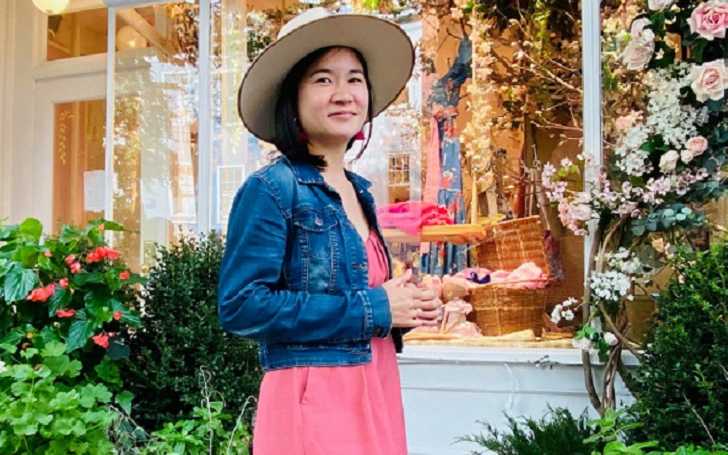 Hannah Pham is an accomplished lawyer with extensive experience on several intellectual property law issues such as patent, copyright, and trademark. She also works as an executive producer at the Money Productions, in the New York City Metropolitan area.

But, most of all, Pham is better known as the wife of the Malaysian-born comedian and actor, Ronny Chieng. Did you know the couple got married in three separate wedding ceremonies due to their diverse-family background?

Besides, Hannah also enjoys cooking, especially is more interested in Asian dishes. In this article, we will take an in-depth look into the life of Ronny Chieng’s wife that includes her family details and education as well!

Who Are Hannah Pham Parents? Is Vietnamese-Australian As Per Her Nationality

Pham is the daughter of Julie Pham. Her mother graduated from The University of New South Wales. As for her early life, she was born and raised in Melbourne, Victoria, Australia. She holds a dual nationality Vietnamese and Australian. Talking about her ethnicity, Hannah is from Asian roots.

Besides, her husband Ronny Chieng, who is from Malaysia raised in a Chinese household in New Hampshire and Singapore.

Hannah Grew Up Along With Her Two Siblings

Hannah Pham Education: Studied Law at the University of Melbourne

Hannah Pham is a well-read woman who attended Melbourne Girls Grammar public school. She then went on to enroll at the University of Melbourne and earned degrees in both Bachelor of Laws and Bachelor of Commerce in 2010. During her time at the college, Pham was a part of multiple law-student organizations such as the Melbourne University Law Students Society and more. She also won multiple honors at the time.

What is Ronny Chieng’s Wife Hannah Pham Doing? Her Career

Pham is an executive producer at Money Productions, in New York. She joined the company in Jan 2021. She also has a wide experience in stand-up comedy after being closely involved in the management of her husband Ronny Chieng’s stand-up comedy career.

Prior to Money Productions, Hannah also worked for several well-known organizations. She first initiated her career as a legal assistant at Redflex Traffic Systems in August 2009 and became part of it until Feb 2011. She used to provide legal support to senior management. Pham then spent a year working at a Herbert Geer, in Melbourne.

In April 2012, Hannah landed a job as a lawyer at Thomson Geer. She was mainly responsible for the operation of the firm’s trade matters. The hard-working and lateral thinker worked there for over four years and left the organization in July 2016.

As per her Linkedin profile, the qualified attorney also served as an associate at Phillips Law & Advisory from August 2018 to March 2019. Furthermore, Hannah spent a few months at VICE Media as a commercial counsel in legal and business affairs.

Besides, Hannah is a qualified New York attorney too. She has wide experience in intellectual property law issues like copyright and trademark.

What’s more, Ronny’s wife has published papers related to intellectual property in stand-up comedy in the Harvard Journal of Law & Technology Digest and Fordham Intellectual Property, Media & Entertainment Law Journal. Back in 2016, Pham was selected in the Lawyers Weekly 30 Under 30 Awards in the Intellectual Property category.

When did Hannah Pham get married to Her Husband Ronny Chieng? Their Three Separate Weddings

Hannah & Ronny got married back in 2016. Interestingly, the two had to marry in three different wedding ceremonies due to their diverse-family that spread out in several countries. Their first event took place in Melbourne, Australia where Hannah’s families reside.

For their second ceremony, they headed to Malaysia to celebrate the big event with her husband Ronny’s family. Their third wedding ceremony was held at the NYC City Hall on 9th September 2016.

Although it is yet to be confirmed by either party, Pham and Ronny mostly likely met while they both were students at the University of Melbourne. They also have earned the same degrees from college.

The couple got engaged in Dec 2015, a year before their nuptials. They now live in New York City.

Hannah and Husband Ronny share the same love for Cooking

In an interview with The New York Times, Ronny disclosed they both have been heavily involved in cooking ever since they moved to New York City.

“Ever since we left Australia, we’ve been really into cooking Chinese food. We’ll make mapo tofu or won ton or steamed fish.”

The comedian further told that his spouse has even started her own YouTube channel under the title, ‘Pham Bam Kitchen.’

“Hannah started her own YouTube channel, Pham Bam Kitchen. It’s Vietnamese and Asian food. Hannah’s cooking, to be honest. I could lie to make myself sound good, but she’s really cooking.”

Hannah mostly uploads some amazing Asian food recipes on her channel. It has over 1.9k subscribers in 2022. She uploaded her first YouTube video on 24th Jun 2018 and also revealed how her interest emerged in cooking on the clip.

What is Hannah Pham Net Worth? Know About Her Husband’s Wealth

Hannah’s net worth is $300,000 as of 2022. She makes money from her various endeavors. On the other hand, Ronny has an estimated net worth of $1 million. His major source of income is his entertainment career.

The comedian has also worked for dozens of movies and TV shows. He made his feature film debut with a role in Crazy Rich Asians. In 2021, the actor appeared in many big projects like Wish Dragon, Long Story Short, and Shang-Chi and the Legend of the Ten Rings. Furthermore, since 2018, her hubby Ronny featured in the TV animated series Scissor Seven.