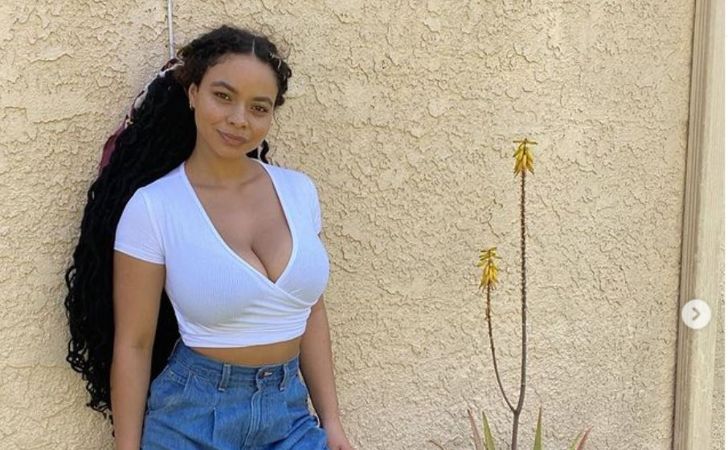 Crystal Westbrooks is an American model and social media star, with prominence on Instagram. She gained fame after her appearance in the reality TV series The Westbrooks, where she appeared alongside her sisters. Further, she is also recognized in the media as the older sister of India Love.

No doubt, she is leading a successful professional life but what about her love life? Is she dating a boyfriend? In this article, we are going to discuss her career, love affairs, and her net worth as well.

American model and social media star, Crystal was born on March 6, 1994, in Compton, California. She is the daughter of father Warren Westbrooks and mother Candy Westbrooks.

Well, she is not the only child of her parents. She rather has four sisters, Morgan, Bree, Brooke, India, and two brothers Pop and Blake. She shares a great relationship with all her siblings especially her youngest sister India Love. As a child, she spent most of her childhood with her parents in Compton but later moved to Corona.

Talking about her education, she attended Ambler Avenue Elementary School in Carson, California. She completed her schooling at Santiago High School in 2011. Eventually, she completed her graduation from Texas Southern University where she received her business degree in 2016.

What is Crystal’s Height?

She Is A Successful Model & Social Media Star

As a successful model, she has walked for several designers and brands. Not only this, but she has also done numerous brand collaborations which she promotes via her social media posts. As per the reports, she has worked for a fashion retailer named Harley Dreux.

Likewise, she has also collaborated with other brands like Tiffany Jewels, The Queen Pegasus Makeup, and Eburns Styling.

Well, Crystal is also a business person. She has already launched a line of her products named Crystal Curls. Her products include shampoos, conditioners, and numerous other hair products.

With enough prominence as a social media star, she also got an opportunity to appear on the TV screen. She along with her sisters were offered to appear in the reality TV series named The Westbrooks. Led by the youngest sibling India, the series showcased the day-to-day life of the Westbrooks sisters.

Upon the release, the show was hugely compared with Keeping Up with the Kardashians. Though the series was decently successful, but could not live up to the hype.

Apart from The Westbrooks, she also appeared in another TV series named Minay TV in 2016. The series stars other celebrities like Minay Matthews, Anthony Lewis, Trevor Jackson, among others.

Like most of the celebrities out there, Crystal has been in numerous relationships over the years. However, she has kept most of the details about her love life low-profile.

Her only known relationship is with Canadian rapper Drake. As per the reports, the duo was together for a while but they could not continue their romance for very long. Later, Drake went on to date her younger sister India.

Talking about Crystal’s relationship in 2021, she is allegedly dating Steven Russel. However, they are yet to confirm the rumors.

Is Crystal Planning a Wedding?

The 1994 born Crystal is 28 years of age at present. And as far as her marital status is concerned, she is unmarried. Moreover, she also doesn’t seem to have any wedding plans. Hopefully, we will get to see her with a perfect husband soon in the future.

When it come to travelling, Crystal is the most eenthusiastic person. In fact, her Instagram is fill with numerous of her travel photos. So far, she has visited numerous cities and destinations across the world.

She is a nature lover and prefers to travel to destinations like forest, mountains, ponds, & much more.

Crystal is tight-lipped when it comes to her wealth. She definitely earns a big amount as a model and social media star. Further, her role in TV is another source that adds up to her income. Well, she has around $1 million in net worth, as per Celebrity Net Worth.