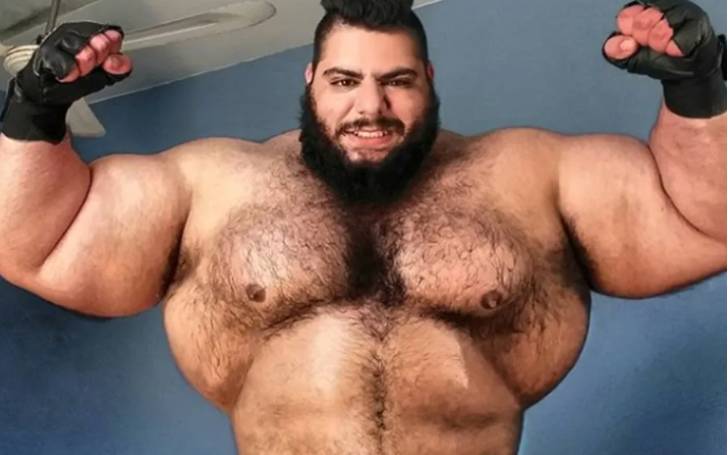 Sajad Gharibi, mostly popular as the Iranian Hulk or Persian Hercules is an Iranian bodybuilder, weightlifter as well as a practitioner of mixed martial arts (MMA). Besides, he is also an Instagram star with 1 million followers on his Instagram account.

Despite being a social media personality, he has been able to keep his life a mystery. He hasn’t opened up much about his personal life and family. The Iranian Hulk shot to fame because of his distinctive body features looking like a “hulk.” On the other hand, he was accused of photoshopping his pictures to make them look better than he actually is. So, what’s the truth?

Likewise, he has also appeared in the fight rings alongside the fighters like Martyn Ford and Kazah Titan. So did he win the match of Iranian Hulk vs Martyn Ford? Read the article below to find everything with us surrounding his parents, height, weight, MMA fight, and more.

The Iranian Hulk was born on 19 December 1991 in Ahvaz, Khuzestan, Iran. Born and raised in Iran, the bodybuilder holds Iranian nationality and is from Persian ethnic background. His zodiac sign is Saggitarius & follows Islam as a religion.

Since Gharibi rose to fame in his later days, not much information about his family is available in the media. He has neither talked about his parents nor any other family members. However, according to sources, he is a married man who has a wife and also a child. Yet, their identity is still under wraps.

Coming to his educational background, he is a graduate. He attained his Bachelor’s degree in commerce from the Azad University in Bushehr.

How Old Is Sajad Gharibi?

While many people wonder about the body weight of the giant-looking bodybuilder and assume it to be more than what actually is, his exact weight is 155 kg, which is 341 pounds as of now. Previously, he used to weigh 183 kg and had to lose weight because of his health condition.

According to the Iran native, he had muscle growth since 15 years old and haven’t used any steroids or supplements. In addition, he said that it is purely the exercise he did and the diet he ate.

Upon asking about his diet, he stated that he eats 5 to 7 meals on an everyday basis which included rice, egg whites, and boiled potatoes. Likewise, if he is preparing for any competition, he increases the diet to 7 to 11 meals.

What is His Height?

Sajad Gharibi stands at a height of 6 feet and 2 inches tall.

The Persian Hercules is a weightlifter who has gained millions of followers on his Instagram these days. He has been able to grab public attention with his giant physique, making him look like a real-life “Hulk.

The bodybuilder has participated in many competitions of powerlifting and bodybuilding, representing his country. Later, he also started boxing as he injured his leg and the doctor forbid him to stress his legs.

Following the doctor’s suggestion, he reduced his exercise and also trained himself as an MMA fighter. However, according to some reports, he did an advertising job at the beginning of his career.

He Had an Offer To Work In Movies

The fame of Sajad Gharibi not only helped him gain followers and admirers but correspondingly brought him many opportunities. Apart from bodybuilding and powerlifting, he also got an offer to play in a movie.

The Iranian Hulk in an interview said, he was invited to play in Ershad Dao. But since he was busy in a teaser where he played as a ranger, he had to refuse the offer.

Who Won The Fight Between Iranian Hulk And Martyn Ford? His MMA Match Against The Scariest Man On The Planet

Martyn Ford was all set for his debut MMA match with the Iranian Hulk in Polish Organization KSW in 2019, however, it later got canceled. Before the match, there was a pre-fight between the two in Dubai where Ford completely destroyed Gharibi.

Since it was easy for him to knock his opponent off and he thought he is not in a mental state of fighting, he thus pulled out of the fight. Martyn Ford even said, he wasn’t as tough and impressive as he was seen in the pictures.

Even before the pre-fight, Ford mentioned that he has asked his opponent if he really wanted to fight. He told Iranian,

Persian Hercules Family Abandoned Him For Losing The Fight

After the pre-fight in Dubai, the boxer had an emotional breakdown and burst into tears on Iranian TV. He stated his family abandoned him for not being strong enough after watching his video. The Iranian hulk said,

“I can’t talk to my father and my mother, when I spoke to her, she said: ‘The person in this video that I saw was not my son, my son is way stronger than this.’ It hurts my heart when I can’t talk to my family. I  have lost my pride and I am destroyed.”

Gharibi then further mentioned taking sleeping pills because he cannot sleep at night. When he was offended and just processing all the incidents, he was called by the Kazakh Titan for another match. Unfortunately, he couldn’t sustain much longer in that match as well.

Sajad Gharibi Was Knocked Out In Boxing Debut With Kazah Titan

As we mentioned above, after Ford pulled out of the fight, the Iranian hulk was distressed and angry. In the meantime, he was again challenged by Djumaniv Almat Bakhytovich aka Kazakh Titan for a boxing fight.

The boxing match was held in Wicked ‘n’ Bad’s Dubai event at the P7 Arena. Kazakh, who was less than Sajad in both height and weight dominated him since the opening of the match.

Gharibi was only either turning his back or walking away from his opponent in an answer to the shots he was getting. The viewers reviewed it as one of the worst performances ever in a boxing ring.

Iranian Hulk Deletes Pictures From Instagram After Being Called Out Photoshopped

The bodybuilder has a million followers on Instagram under the name “Sajad Gharibi” and has become a social media sensation because of his distinctive physique. Nonetheless, he deleted most of his photos when people started calling them “photoshopped.”

Looking at his match videos with Titan, his fans and followers concluded him not being as strong as he looks in his photos.  In fact, he also appeared shorter than he claimed as he looked of the same height as 5 feet and 7 inches fighter man Titan.

Therefore, people flooded the comments on his pictures calling them fake and photoshopped. Following this, he deleted almost every uploaded picture of him leaving a few. Regardless, he didn’t say anything in a reply to the remarks he was getting from the public.

How Much Money Does Sajad Gharibi aka “Iranian Hulk” Make?

He, even though has lost most of the matches he has participated in, has earned enough fame and money. Whatever the reasons are behind his weak performances lately, he has done quite a good job in powerlifting and bodybuilding.

As of 2022, the Instagram star is making good money and has amassed a net worth of $1.5 million. We hope he will come back with a bang and surely win upcoming matches.