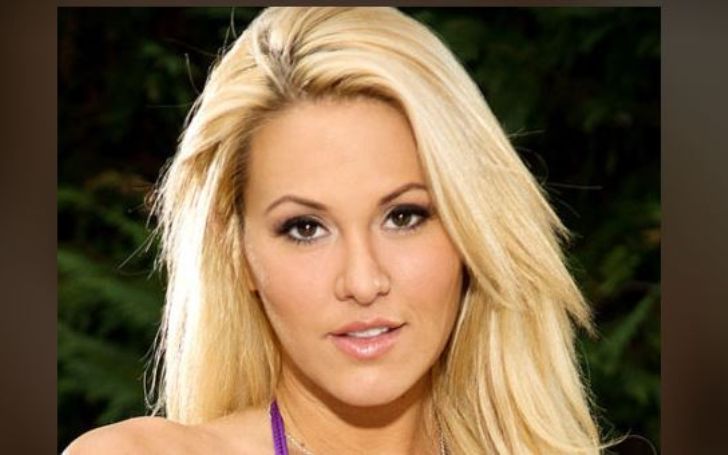 Kindly Myers is a model and a bartender from Tennessee. She is notable for gracing the cover page of Modelz View Magazine November 2014 Part 1. Kindly has also been in other top glamour magazines laying claim to being the top Hot rising Model from Tennessee.

In addition to very active Twitter and Instagram accounts, she has also been featured in Maxim, Coed.com, and various other magazine covers and photoshoots. In fact, an aspiring model, Myers was an eyecatching force in the “Maxim’s Finest” competition, placing 3rd out of 52 contestants in South Group Nineteen.

Kindly’s drop-dead gorgeous looks combined with her distinctive ‘Invictus’ tattoo running down her right side give her quite a bit of appeal. The Tennessee/Kentucky blonde model is specifically noted for flashing her curves in exotic bikini pieces.

The Playboy model often treats her followers to a glorious view of her toned posterior as she loves to flaunt her behind. Myers has come through all; from Farming to Bartending to Modeling and to an internet sensation. Insiders claim the 37-year-old who has a measurement of 32DD-26-35 is also one of the coolest and most down-to-earth gals one could ever talk to.

Take a look at the ups and downs of Myers’ life and modeling journey in the ensuing headings; know how she got into the beauty industry, her other focuses, her personal life, and some add-on details.

Kindly Myers Is A Kentucky Grown

Kylie Myers fully Kylie Jean Myers was born on 20 September 1985 in Bowling Green, Kentucky, although she now lives in Nashville, Tennessee. Myers is from a very small town in the great state of Kentucky.

She grew up on a farm with lots of animals. In an interview, Myers said she had a great childhood and she couldn’t have asked for more.

Myers went to high school in a very small town on the Kentucky and Tennessee border also where she grew up. After school, she, however, moved to Nashville to get out of her native state and see what the other cities had to offer.

Kindly says she’s always thought of becoming a model and it was something that had always been a passion of hers, Myers admitted to Modelz View in April 2021. The Southern model once said she had also had strong family support while pursuing a modeling career.

When Modelz View asked how she found her way in front of the camera, Myers said,

I’ve always wanted to model, but growing up it didn’t seem practical. One day I just decided not to let anyone or anything tell me I couldn’t at least try. I have been very fortunate to work with some amazing photographers on my journey.

For her, one of the most challenging things about modeling though was finding her confidence when she first started. Myers admits she was always nervous at the beginning.

She now nonetheless is very well on the track and as mentioned has notably posed for monthlies such as Modelz View, Maxim, Coed, and others. She additionally was also on the cover of Joker Magazine and has been featured on Busted Coverage as well.

Myers is also a huge fan of Kentucky basketball from the University Of Kentucky Athletics (UK). She is a self-proclaimed Kentucky Wildcats superfan, something that she proudly states in her Instagram bio. Myers admits she has always been a Kentucky fan.

In fact, she often gives her insights about the team’s season as a random pundit. Her favorite Kentucky sports memory is UK vs. Louisville in 2004 when Patrick Sparks was fouled with less than a second left and the UK sank all 3 free throws to win the game.

Additionally, her socials are also filled with the elations and laments of a typical die-hard Wildcats fan.

Kindly Myers Was In The Army

The Kentucky-born during her early 20s was in the army national guard. She joined the guard when she was 20; she served four years in the Guard. Of that experience, Myers says, she learned so much about herself during those years.

Myers maintains that basic training in the Army National Guard taught her a lot about herself. She admits to learning that she is much stronger than she ever thought she was, both mentally and physically.

While in the guard, Myers states she also got to shoot many different types of guns and rocket launchers. To her, it was fun where she met some great people. The blonde IG model states the national guard gave her enough confidence to kick someone’s ass in hand-to-hand combat if the situation arose.

Kindly Is Also A Bar Tender

Myers once was an ace bartender for Legends Corner in Nashville, which is one of the best places in Tennessee’s capital city. She though now works at Tootsie’s World Famous Orchid Lounge.

Her journey to this line of the profession began when she moved to Nashville and started doing promotions for a bar. To her, the bartenders seemed to be having so much fun and she, therefore, kept on asking to learn.

They eventually put her behind the bar on a Saturday night to work/learn the ropes. Myers says it was stressful in the beginning but she picked it up pretty quickly and has been bartending for years now.

Kindly admits it’s a great job from which she makes great money, gets to have fun, and meets lots of new people. The bikini model says she’s always busy with her bartender job and modeling.

And when she’s not working Myers is mostly busy with her dog and horse. Between modeling and bar, Kindly once said that it’s the former she would love to do as a full-time career, but the bartender/model stated she would have missed bartending.

When asked what are her dreams and ambitions in mid-2021, Myers said she was going to school to get a degree in marketing. Continuing modeling is also something that she says is looking to pursue long-term.

Does Kindly Myers Have A Boyfriend?

The Kentucky Wildcats fan does have a boyfriend-turned-husband, Harrison Yonts. The couple married in Sep 2021.

It is unclear when the now husband and wife started dating, though Yonts first appeared on Myers’ Facebook in Nov 2018. Myers once admitted to her husband knowing how she gets marriage proposals twice every week while bartending.

Though her partner apparently trusts her and knows she is not going anywhere. Myers, however, says her boyfriend will never get used to people taking her picture or saying they love her.

Myers is also very fond of her horse and dog. Her Instagram feed is full of pictures and videos of hers and her horses and her pooch.

Kindly allegedly got a mini horse when she was 3 and she’s been riding ever since.