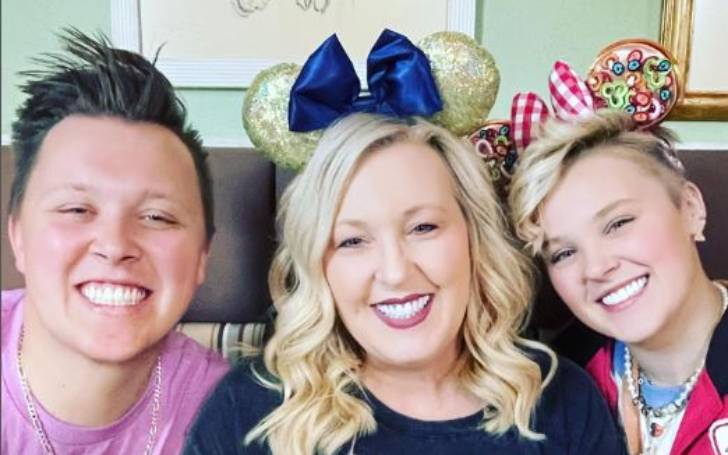 Jessalynn Siwa is a professional dance trainer, momager, and media personality. She is best recognized as the mom of our very own teen sensation Jojo Siwa and YouTuber Jayden Siwa.

Jess and Jojo are mostly popular as the powerhouse mother-daughter duo. As a part of being a super supportive mother, Jessalynn herself went on Dance Moms alongside Jojo during the show’s fifth season.

The mother of two is married to her husband Tom Siwa since 1998. In the article below, we will talk in brief about the Siwa family, their rise to the limelight, and many more. Also, find out more about Jessalynn’s career, net worth, and age.

Jessalynn Siwa Was Born In Iowa- How Old Is The Mother Of Two?

Jessalynn Lombardi was born on 8th December 1974 in Iowa, the USA making her 48 years old in 2022. Her birth sign is Sagittarius. She was born to her mother Kathy Lombardi who was a hairdresser. Sadly, her mother passed away after a long battle with colon cancer.

Moreover, her father worked in a waste manufacturing organization. Jess grew up alongside her sister Tessa Medinger.

Likewise, she holds American nationality and has mixed ethnic descent. Siwa stands 5 feet 1 inch tall in height. Besides this, information about her childhood and education is not available at the moment.

The 48-year-old is an entrepreneur, dance teacher, and instructor who owned the Underground Dance Factory for about two decades. The dance studio shut down in 2016.

Likewise, she also ran the Just Dance Co. Though she never went professional with her career, she is somewhat turning her dreams into reality through her daughter Jojo.

As of 2022, Jessalynn works as a manager at XOMG POP! It is a seven-girl group living their dreams to become the next pop stars. Similarly, she also runs a podcast show called Success With Jess which you can listen to on Spotify.

She mostly shares her personal experience with the world via her podcast which airs twice a week on her Youtube channel Sucess With Jess.

Jessalynn Siwa Practically Sacrificed Her Own Career For Her Daughter

Like any parent, Jessalynn changed her whole life around after her daughter kissed the heights of success at a very young age. She selflessly worked hard to promote Jojo’s work of art.

And just like Jess, her husband Tom who is a chiropractor also gave up his career in order to support his only daughter’s growing career. As of now, Jess works as a manager for Jojo who most probably has a busier schedule and life than most of us.

During an interview with USA Today, she opened up about how it feels is to manage Siwa‘s business. She said,

“The greatest thing about it is she literally was doing it all herself, from filming to editing to thumbnails to producing, to see her have the success is really just the cherry on top.”

“Every day is just a learning experience, It’s a lot of work and a lot of commitment. If it’s what you love, you’ve gotta try.”

As we’ve already mentioned above, Jess and Jojo are more of a best-friends duo than a mother-daughter one. Also, we’ve also cleared out that she has been promoting her daughter since day one.

And in that process, Jess created Jojo’s iconic bright oversized bows which she debuted during her first appearance in Dance Moms. The mother of two had handmade all of the bows for her daughter.

The bow look was loved by so many that they started selling it as one of Jojo’s merch. Although Siwa wears her iconic bow look lesser, it is still sold at Claire’s. Moreover, her other merchandise is stickers, mugs, sweatshirts, phone covers, diaries, bed sheets, masks, hoodies, t-shirts, backpacks, and more.

She Is An Avid Dog Lover

As we all know, dogs have been our companions through thick and thin like any other being throughout centuries. Well, Jessalynn Siwa has three of them named Bowbow, Coco, and Lulu.

Even after having a busy life, Jess always takes her time out for her three furry friends. All of her three pets, Bowbow(blonde), Coco (brown), and Lulu (white) are teacup Yorkie. And for those of you who don’t know, Lulu and Bowbow were adopted.

The mother-daughter duo often use their huge platform and encourage their fans and followers to go for adoption rather than buying in pet stores or the breeders.

It is of no surprise that a mother is overly protective of her children, especially when they are internet famous. Back in Aug 2022, Jess stepped in in order to save Jojo from her drama with actress Candace Cameron Bure.

The 19-year-old started a feud-like-misunderstood situation after she called Bure “the rudest celebrity i’d ever met” in one of her TikTok. With over 43.6 million fan base, Siwa’s video started blowing up and reached to Bure herself.

Upon seeing the video, Cameron immediately reached out to Siwa and had a good chat about the situation. During an interview with Today, Bure explained the incident saying, “She was like, ‘Hey, how you doing?’ I kind of said, ‘Well, I’ve been better. What happened?”

She continued her series of questions asking Jojo about the Tiktok to which she replied,

“I met you at the ‘Fuller House’ premiere and I was 11 years old and we were all on the red carpet. And when I had come up to you and I said, ‘Can I have a picture with you?’ and you said to me, ‘Not right now,’ and then proceeded to do what you were doing and take pictures with other people in the red carpet.”

After hearing about the backstory, Candace replied,

“Oh, JoJo, I’m so sorry.’ She’s like, ‘No, no, you weren’t even mean.” Cameron genuinely apologized for her behavior back then saying, “because I know if anyone crushes my kids, like, mama bear comes out.”

After the talk, Cameron and Jojo are on good terms. Moreover, they had even gone to the Kelly Clarkson Show and had a good time. This was before all this situation.

The 48 years old media personality is married to her husband Tom Siwa. The couple has been married for over two decades since 2nd October 1998.

The family of four lived in Omaha, Nebraska before moving to California for Jayden and Jojo’s careers. They currently live in a 6,000 sq. ft. Mediterranean-style house worth $3.5 million.

According to various sources, Jess’ current net worth is around $2 million in 2022. She earns her wealth from her career as a manager and media personality.