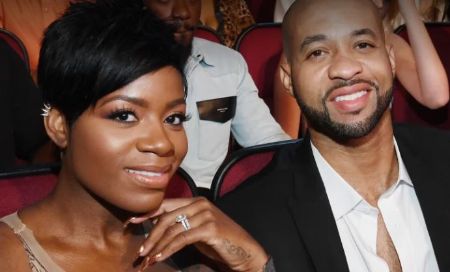 Kendall Taylor is a president of an entertainment company and a mentor for an offenders facility. He though is better known as the husband of Fantasia Barrino, an R&B singer. Taylor’s wife, Barrino rose to fame as the winner of the third season of the reality television series American Idol in 2004.

She is known for songs such as Free Yourself, Without Me, Falling In Love Tonight, I Feel Beautiful, Lose To Win, Got Me Waiting, and others. Taylor might be Fantasia Barrino’s husband, but he has his own identity and some stories too. He has been his husband of Barrino since the mid-2010s with one daughter.

Much like his wife, Kendall, too, has a patchy past of his own. Read all about them in the ensuing headings alongside the details of his relationship with Barrino, his profession, and so on.

The American Idol winner’s husband, Kendall Taylor was born on August 10, 1980, in Wiesbaden, West Germany. He though mostly grew up in Gaston Country, North Carolina. Kendall was raised in a single-parent home.

As a teenager, the R and B singer’s partner associated himself with the wrong crowd and went behind the bars multiple times. He even became a father at age 15 and struggled with the difficulties of raising at while he was such a young age.

What Does Kendall Taylor Do?

Fantasia’s husband, Kendall has found some success in the business world. He was once the COO of courier service company, Metro Transportation, LLC.

One of Taylor’s most talked-about accolades is the point when Lowe’s Pride Awards honored him as their 2014 Pride MBE of Distinction Winner for his work. As of the present, Taylor is the president of Rock Soul Entertainment, an Entertainment Company/ Record Label. He’s been serving the role since  2016.

In the meantime, he is also involved with Charlotte’s MOVE program. Some other organizations where he volunteers include the Men Who Care Global organization, the Charlotte Urban League, the CSMDC (Metro) Race Committee, and the CMEDI.

How Did Taylor And Fantasia Barrino Meet Each Other?

Kendall and Barrino met in the summer of 2015 at a nightclub. When talking with ESSENCE in November 2019, Fantasia opened up about how meeting her husband, Kendall Taylor, helped her find herself and become the woman and artist she is today.

“Everything changed when I met him,”

the Free Yourself singer said of the first time she met her husband Taylor.

Three weeks after meeting each other for the first time, they had their wedding in July 2015 on a yacht.

The couple, Taylor and Fantasia didn’t consummate the ­relationship until their wedding night. It was something the Platinum singer ­confided herself in July 2016 with Billboard. The pair married once again a year later on the occasion of Christmas.

Barrino and Taylor as a couple believe men have abused the power of submission which originally was supposed to be shared between partners. Kendall’s singer wife once also stated it is men that need to stand up and lead the way.

For this belief, they, however, went on to receive some criticism. Together, they have also co-authored a book, No Crowns In The Castle Building a Strong Relationship and a Harmonious Life.

Taylor and his family reportedly reside in Charlotte, North Carolina.

Kendall Taylor and his singer wife, Fantasia welcomed their first child, a daughter, Keziah London Taylor in May 2021. Barrino before giving birth to her daughter with Taylor had revealed she had some fertility issues and turned to ‘praying’ to help.

They had been working to have their first child for several years.

Back when they first announced their pregnancy in November 2020, Taylor and Fantasia opened up about their struggles to conceive. The Grammy nominee shared that her doctors told her the chances of getting pregnant were slim since her fallopian tubes were too narrow.

Taylor also has a son named Treyshaun. It though is unclear who his mother is and if she was Kendall’s first wife or just a girlfriend. Barrino’s spouse further is also a stepfather to her two children, Dallas Xavier, and Zion Quari. They each were born from her two previous different relationships.

What’s more, Taylor is also a grandfather through his son, Treyshaun. The now 42 years old Kendall announced this for the first time in Dec 2019 on his Instagram handle.

Sharing a post for the news, the West Germany-born in the caption revealed his son Trey had welcomed his second baby boy Kyan. Taylor additionally wrote how his wife Fantasia was also overjoyed at the birth of her stepson’s son.

Although Taylor now looks like a good husband and father to Fantasia’s kids, he once used to be a troublemaker. As such, Radar Online reports from 1996 to 2007, Taylor stayed behind the bars for a number of charges that included firearm possession, assault on a female, and drug possession.

North Carolina Department of Public Safety documents apparently shows the police arrested Taylor for possessing a weapon on a school campus, a felony when he was just 16 years old in 1996. He later went to a facility hundreds of miles from his home.

And four years later, the law officials again arrested him for assaulting a female— twice— and again was convicted and sentenced to probation. Once again in 2007, the police ended up busting him with a Schedule VI drug possession.

How Kendall Corrected Himself?

The singer’s husband, now, however, seems to be on a good path. He reportedly credits adopting Christianity for his transition to where he is now. It was during his incarceration that Kendall apparently began to clearly hear and respond to the call of God in his life.

As a matter of fact, it was for correctional procedures that Taylor joined the Charlotte, North Carolina MOVE program and now serves as its mentor as well.

There his biography tells about him giving his life to Jesus Christ. During the time of his detainment, he reportedly also laid down the failures of his past and began to carry his cross for the sake of Christ. Or so states his biography on the North Carolina MOVE program’s website.

The site further mentions how Kendall, today, always carries a determination to win souls who were on a bad track and lack direction. He now serves as a mentor to offenders in a program called Mentors of Valor Empowered (MOVE).

What Fantasia Barrino Said About Her Husband Kendall Taylor’s Past?

When the news of Barrino and Taylor’s relationship first came out in the media, some of the North Carolina-born artist fans took to social media to warn her about the relationship. The singer, however, insisted Taylor’s past rather provided a platform for God to use him.

In fact, Fantasia had even taken it to her social media to advocate for her then-new boyfriend’s checkered past,

“I think about all the things he has told me and I’m Like Man!!! Nothing but God. You Can’t tell me God won’t take something Out of Nothing and Turn it into SOMETHING I Love This Man And He is Crazy about me,”

wrote the R and B singer on her Instagram.

Is Kendall Taylor As Rich As His Wife; What Is His Net Worth?

While Taylor’s partner, Fantasia Barrino by definition is a millionaire, what fortune her husband holds though is a whole different mystery.

On one hand, there’s the wife of Kendall Taylor, who has had multiple laudations under her belt; from certifications such as gold, and platinum, as well as the Grammy nominations. What, however, is still missing is even the slightest approximation of her net worth. On the other hand, there has not been at all the faintest of discussion about Barrino’s husband, Taylor’s net worth.

In any case, it is at the least possible that the father of two has it comfortably easy when it comes to living a celebrity-Esque life. Considering he has won and held some reputed positions at a number of financial firms.

Who Is Jesse Eisenberg’s Wife Anna Strout? Everything You Should Know