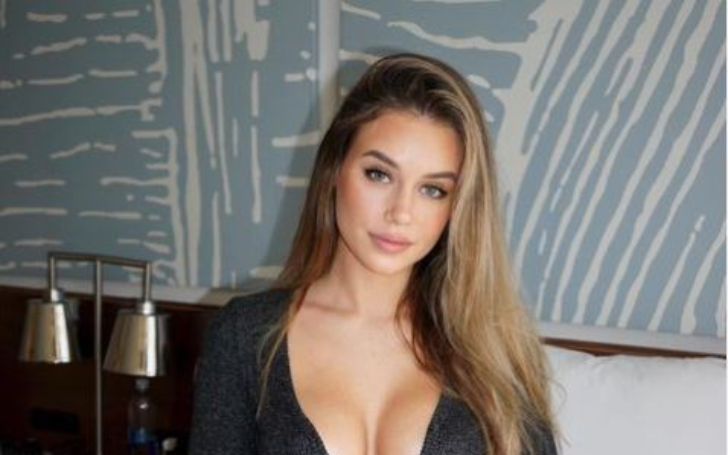 Hailey Grice is a social media influencer and Instagram star with over 997k followers on Instagram. Lately, she has been a subject in the media for her alleged marriage with poker player Dan Bilzerian, which is untrue.

The news of her marriage to Dan started circulating after Dan posted a picture with a girl similar looking to Hailey. So, who is Hailey actually dating? Or is she already married?

Hailey Grice Early Life: When Was She Born?

The media personality Hailey Grice was born on 5th November 1998 with the birth sign Scorpio. She was born in North Carolina, the United States, and is 24 years old as of 2022.

Likewise, she has white caucasian ethnicity. She reportedly has a brother named Nicholas. Besides this, other information related to her parents and family is under the radar.

Hailey Grice Was A Competitive Cheerleader For Six Years

Grice was fond of cheerleading and was an ace on her team for a total of six years. During her middle school and high school days, she cheered for the Spartans.

She even had an Instagram account named @haileycheer solely dedicated to her cheerleading journey. The account has over 2k followers as of now with 39 posts. Following her high school graduation, she started her other IG account and stopped using her old one.

Grice Began Her Modeling Journey In 2017

As mentioned above, Hailey switched from cheerleading to social media shortly after finishing high school. Since then, she has accumulated over 977k followers on her IG handle @haileygrice, over 108.3k on Twitter, over 49k on Facebook, and over 163.6k on Tiktok.

Moreover, she also has an old self-titled YouTube channel with 460 subscribers. Her secondary Instagram profile @hailey_grice has over 83k followers.

Grice is currently signed to Unruly Agency. So far, she has collaborated with brands like Beauty Creations Cosmetics, Basic AF, Hi-Tech Pharmaceuticals, Imaginary Magazine, Lounge, and many more.

On 25th July 2022, Dan Bilzerian shook the internet when he posted a picture of his marriage to an unidentified woman on his Instagram which he captioned “I finally did it”. After the post went viral, millions of followers speculated the bride was none other than model Hailey Grice.

Grice has neither confirmed the news nor has she denied it. Similarly, Dan has not made any further updates since his viral wedding post.

While the post has confused fans from all over the world, Hailey is actually dating someone else. So who is her boyfriend? Find out down below.

When the internet is going all frenzy over Dan and Grice’s wedding, we did some digging and found out the lingerie model is in fact dating NBA player Abdel Nader.

According to her TikTok, she and Nader started dating in 2020. Though Hailey has not posted Abdel on her IG handle, she has several TikTok videos with him. While on the other hand, the pro-basketball player has posted his beau a few times.

Back in 2018, Grice was dating real estate developer Dylan Dauzat. As of 2022, Dylan is also dating someone new.

Is Hailey Planning a Wedding?

Well, Grice is in no mood to tie the knot any time soon. She is currently in a happy state with her boyfriend Abdel, however, the duo does not have any plans to walk down the aisle.

That said, we would love to see her marriage as a perfect wife.

What Is Hailey Grice’s Current Net Worth?

According to various reliable sources, Grice’s net worth is estimated at around $500,000 as of 2022. Her primary income source is her modeling career and social media. Apart from this, she also earns thousands of dollars from OnlyFans’ subscriptions.